Wood in Our Future: The Role of Life-Cycle Analysis: Proceedings of a Symposium (1997)

Get This Book
Visit NAP.edu/10766 to get more information about this book, to buy it in print, or to download it as a free PDF.
Page i Share Cite
Suggested Citation:"FRONT MATTER." National Research Council. 1997. Wood in Our Future: The Role of Life-Cycle Analysis: Proceedings of a Symposium. Washington, DC: The National Academies Press. doi: 10.17226/5734.
×

Wood in Our Future

This study was supported by the Forest Service of the U.S. Department of Agriculture, under Cooperative Agreement No. FP-94-2341. Any opinions, findings, conclusions, or recommendations expressed in this publication are those of the author(s) and do not necessarily reflect the view of the organizations or agencies that provided support for this project.

A limited number of copies is available from:

At the request of the U.S. Department of Agriculture's Forest Service, the Board on Agriculture convened a symposium on "Environmental Implications of Wood as a Raw Material for Industrial Use" in March 1996 to explore issues related to the use of life-cycle analysis methodologies. Ten symposium papers are included in this report and they address several major topics:

The ten papers in this report, as well as the round table rapporteur's perspectives, reflect the authors' viewpoints and do not represent general overall opinions or findings of the symposium steering committee and symposium participants.

THE STEERING COMMITTEE ACKNOWLEDGES the outstanding contributions of all symposium speakers and participants representing academia, industry, environmental organizations, professional societies, and other associations throughout North America and Europe. Special thanks is extended to Frank Beall and Joseph Fiksel for their service and coordination of the symposium program.

Next: OVERVIEW »
Wood in Our Future: The Role of Life-Cycle Analysis: Proceedings of a Symposium Get This Book
× 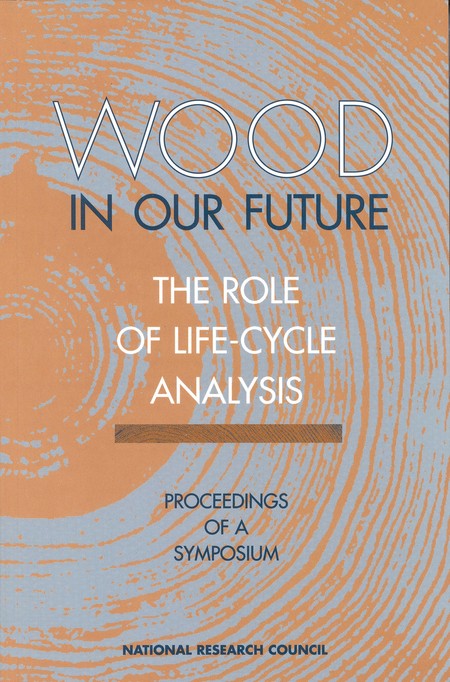 The United States produces 25% of the world's wood output, and wood supports a major segment of the U.S. industrial base. Trees provide fiber, resins, oils, pulp, food, paper, pharmaceuticals, fuel, many products used in home construction, and numerous other products. The use of wood as a raw material must consider production efficiencies and natural resource conservation as well as efficient, profitable use of solid wood, its residues, and by-products.

To better assess the use of wood as a raw material, the U.S. Department of Agriculture's Forest Service asked the National Research Council's Board on Agriculture to bring together experts to review the analytical techniques used to follow the life-cycle of wood production—from tree to product—and assess the environmental impacts. This resulting book provides a base of current knowledge, identifying what data are lacking, where future efforts should be focused, and what is known about the methodologies used to assess environmental impacts. The book also focuses on national and international efforts to develop integrated environmental, economic, and energy accounting methologies.