Get This Book
Visit NAP.edu/10766 to get more information about this book, to buy it in print, or to download it as a free PDF.
Page i Share Cite
Suggested Citation:"FRONT MATTER." National Research Council. 1997. Fire Suppression Substitutes and Alternatives to Halon for U.S. Navy Applications. Washington, DC: The National Academies Press. doi: 10.17226/5744.
×

Committee on Assessment of Fire Suppression Substitutes and Alternatives to Halon

The National Research Council was organized by the National Academy of Sciences in 1916 to associate the broad community of science and technology with the Academy's purposes of furthering knowledge and advising the federal government. Functioning in accordance with general policies determined by the Academy, the Council has become the principal operating agency of both the National Academy of Sciences and the National Academy of Engineering in providing services to the government, the public, and the scientific and engineering communities. The Council is administered jointly by both Academies and the Institute of Medicine. Dr. Bruce Alberts and Dr. William A. Wulf are chairman and interim vice chairman, respectively, of the National Research Council.

This work was performed under Department of the Navy Grant N00014-96-1-0220 issued by the Office of Naval Research under contract authority NR 201-124. However, the content does not necessarily reflect the position or the policy of the Department of the Navy or the government, and no official endorsement should be inferred.

The United States Government has at least a royalty-free, nonexclusive, and irrevocable license throughout the world for government purposes to publish, translate, reproduce, deliver, perform, and dispose of all or any of this work, and to authorize others so to do.

COMMITTEE ON ASSESSMENT OF FIRE SUPPRESSION SUBSTITUTES AND ALTERNATIVES TO HALON

Office of the Chief of Naval Operations, N911T1

On January 1, 1994, under the latest revision of the Montreal Protocol on Substances That Deplete the Ozone Layer, the domestic production of halons, widely used by the civilian, commercial, and military communities as a fire and explosion suppressant, was banned. The ban did not prohibit the use by the Navy of existing halon stocks, which may be adequate for projected use well into the next century at present levels of consumption. There is some concern, however, that potential future restrictions may limit the use of existing supplies.

The Navy is critically dependent on halon as a fire and explosion suppressant aboard existing aircraft and surface ships. Therefore, the Navy is faced with the following question: In view of the ban on halon production and the possibility of future restrictions on the use of existing stocks, should the research effort on halon substitutes be placed at a high priority or at a low priority while transferring emphasis to the search for alternative (non-halon-like) approaches? To answer that question, the Office of Naval Research requested the assistance of the Naval Studies Board.

Accordingly, the Committee on Assessment of Fire Suppression Substitutes and Alternatives to Halon was established under the auspices of the Naval Studies Board and charged to examine the following issues and provide advice to the Navy regarding its research on fire suppression systems and possible replacements for halons:

The committee conducted a study of roughly eight months' duration beginning in April 1996 and including the following meetings and site visits:

The resulting report represents the committee's consensus view on the issues posed in the charge.

The Committee on Assessment of Fire Suppression Substitutes and Alternatives to Halon wishes to express its gratitude to the many individuals who provided valuable information and support during the course of the study. Mr. James Homan and his staff in the Halon R&D Program in the Naval Air Systems Command, and Mr. Robert Darwin and Mr. Joel Krinsky and their staffs in the Fire Protection Division and the HVAC Submarine Life Support Division, respectively, in the Naval Sea Systems Command were exceptionally helpful. Likewise Dr. Ronald Sheinson, Head of the Combustion Dynamics Section of the Chemistry Division at the Naval Research Laboratory, and Dr. Richard Gann, Chief of the Fire Science Division of the Building and Fire Research Laboratory at the National Institute of Standards and Technology, and their staffs provided extremely valuable technical data.

The committee wishes to thank the commander and crew of the USS Kearsarge , a modem amphibious assault vessel (LHD-3) based in Norfolk, Virginia. The committee toured this vessel and inspected the halon installations on board. The ship's procedures with regard to the halon systems were described in detail and the committee was impressed with the logic embodied in the Navy's practices.

Finally, the committee wishes to thank the men and women of the North Island Naval Air Depot for graciously hosting the committee on its tour of the aviation maintenance facility there. The committee received informative briefings from the staff of the Naval Air Systems Command and the Naval Air Warfare Center in Lakehurst, New Jersey.

Next: EXECUTIVE SUMMARY »
Fire Suppression Substitutes and Alternatives to Halon for U.S. Navy Applications Get This Book
× 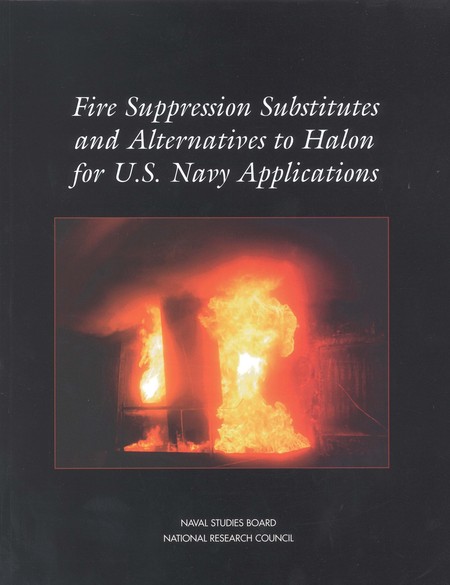