High School Mathematics at Work: Essays and Examples for the Education of All Students (1998)

Get This Book
Visit NAP.edu/10766 to get more information about this book, to buy it in print, or to download it as a free PDF.
Page i Share Cite
Suggested Citation:"Front Matter." National Research Council. 1998. High School Mathematics at Work: Essays and Examples for the Education of All Students. Washington, DC: The National Academies Press. doi: 10.17226/5777.
×

Essays And Examples For The Education Of All Students

The Center for Science, Mathematics, and Engineering Education (CSMEE) was established in 1995 to provide coordination of all the National Research Council's education activities and reform efforts for students at all levels, specifically those in kindergarten through twelfth grade, undergraduate institutions, school-to-work programs, and continuing education. The Center reports directly to the Governing Board of the National Research Council.

The Mathematical Sciences Education Board was established in 1985 to provide a continuing national capability to assess the status and quality of education in the mathematical sciences and is concerned with excellence in education for all students at all levels. The Board reports directly to the Governing Board of the National Research Council.

High school mathematics at work : essays and examples for the education of all students / Mathematical Sciences Education Board.

Permission for limited reproduction of portions of this book for education purposes but not for sale may be granted on receipt of a written request to the National Academy Press, 2101 Constitution Avenue, NW, Washington, DC 20418.

Copyright 1998 by the National Academy of Sciences. All rights reserved.

State of Connecticut Department of Education

This report has been reviewed by individuals chosen for their diverse perspectives and technical expertise, in accordance with procedures approved by the NRC's Report Review Committee. The purpose of this independent review is to provide candid and critical comments that will assist the authors and the NRC in making the published report as sound as possible and to ensure that the report meets institutional standards for objectivity, evidence, and responsiveness to the study charge. The content of the review comments and draft manuscript remain confidential to protect the integrity of the deliberative process. We wish to thank the following individuals for their participation in the review of this report:

While the individuals listed above have provided many constructive comments and suggestions, responsibility for the final content of this report rests solely with the authoring committee and the NRC.

Foreword: Mathematics for a Modern Age

Now more than ever, our daily lives are directly affected by mathematics. I'm not just talking about the grades students get or how many mathematics classes they have to take. I'm talking about answering the phone, faxing a document, or driving a car. I'm talking about buying medicine for your family, building a house, and listening to music. Mathematics has also helped bring us things that indirectly affect us, like the discoveries of DNA, weather patterns, and how to use light as a surgical tool. It has helped us walk on the moon, create microchips, and transmit images across thousands of miles. With mathematics, we design models to test our ideas and refine them, from nerve impulses to human behavior, volcanoes to food. Mathematics is everywhere. But mathematics has always been around, and the concepts it uses have always helped us.

So why is mathematics so much more important to our lives now than it was then? Years ago, in the eras of the abacus or slide rule, information took a lot longer to sort through, but now it is easy to chart a course, assay a risk, or compare statistics. Information is more abundant than ever. You can find answers about everything from world politics to school lunches almost as soon as you think of the questions.

More practically, almost every job these days requires at least some elementary understanding of mathematics. In fact, many of the jobs that keep our country competitive and successful in the global market are jobs that require more than basic mathematics comprehension. Not that everyone needs to be able to program a computer or predict the stock market, but with the vastly increased speed of statistical calculation (and manipulation) and easier and faster global communication, our children need to know what a number means, where it came from, and how best to judge its veracity.

As the Governor of Georgia, I take all of this pretty seriously. I know the importance of bringing businesses to my state to create jobs for Georgians. The world, however, is their marketplace; to be healthy, competitive, and economically secure, our citizens must understand mathematics. They need to become comfortable with the notion of mathematics as a tool for life.

GOVERNOR ZELL MILLER was elected Governor of the state of Georgia in 1990. Since taking office, his love of teaching and commitment to education has resulted in one of the most ambitious agendas to improve public education in this century. Governor Miller's public career includes service at virtually every level of government: as mayor, as a member of the state senate, as lieutenant governor, and now as Governor. He is currently Chairman of the Education Commission of the States. He has also chaired the Southern Governors' Association, the Appalachian Regional Commission, and the Council of State Governments. Governor Miller keynoted the 1992 Democratic National Convention in New York and chaired the Platform Drafting Committee for the 1996 Democratic National Convention in Chicago.

For over ten years the Mathematical Sciences Education Board (MSEB) has worked to support the improvement of mathematics education. The work of the Board becomes visible largely through publications, beginning with Everybody Counts (1989) and Reshaping School Mathematics (1990). High School Mathematics at Work builds on this prior work. Like Measuring Up (1992), it contains student tasks; like Mathematical Preparation of the Technical Work Force (1995), it highlights the mathematics needed for careers.

High School Mathematics at Work was developed through the efforts of more people than can be named individually here. We gratefully acknowledge the generous financial support of the Pew Charitable Trusts, and thank both Robert Schwartz for his special encouragement with this project when he was Director of their Education Programs, as well as Janet Kroll for her continuing interest and support as our program officer.

The project was launched as a 12th grade sequel to Measuring Up through the initiative of Linda P. Rosen. The MSEB first envisioned that this sequel would illuminate some features of high-quality high school mathematics teaching and learning through standards-based assessment tasks. The growing interest in school-to-work issues, however, led to our giving this theme major prominence. With this new focus, Lynn Arthur Steen and Susan Forman designed the

project, secured funding, collected mathematical examples, commissioned essays, and worked with the Task Force, first as members of the MSEB staff and later as consultants. We also thank Daniel Goroff for his leadership during a period of staff transition.

Examples of mathematical tasks were solicited over a period of two years from a wide variety of sources, as described in Appendix A. From the hundreds of examples that were contributed, the Task Force selected about two dozen for inclusion, wrote first drafts of those mathematical examples, and identified essay topics and authors. The resulting collection of examples and essays was molded into its current form by Bradford Findell, serving as editor, under the guidance of Glenda Lappan, Alan Schoenfeld, and Harvey Keynes, with the assistance of Cathy Kessel, and with substantial input from Deborah Ball, Sadie Bragg, Gail Burrill, Shari Coston, Shelley Ferguson, Melvin George, Rick Jennings, Jim Leitzel, Tony Martinez, Pamela Matthews, Patrick McCray, and Jack Price.

Of course, no project of this size could ever come to completion without the contributions of support staff. Thanks especially to Sharon O'Donnell for her help collecting the essays and examples and to Catherine Bell and Doug Sprunger for their help with the review process. We must also thank Sally Stanfield, Linda Humphrey, and the staff at the National Academy Press for their support and patience with the complex evolution of this project.

National Research Council. (1989). Everybody counts: A report to the nation on the future of mathematics education. Washington, DC: National Academy Press.

Additional thanks for the many efforts and suggestions offered by the following people:

Next: Introduction »
High School Mathematics at Work: Essays and Examples for the Education of All Students Get This Book
× 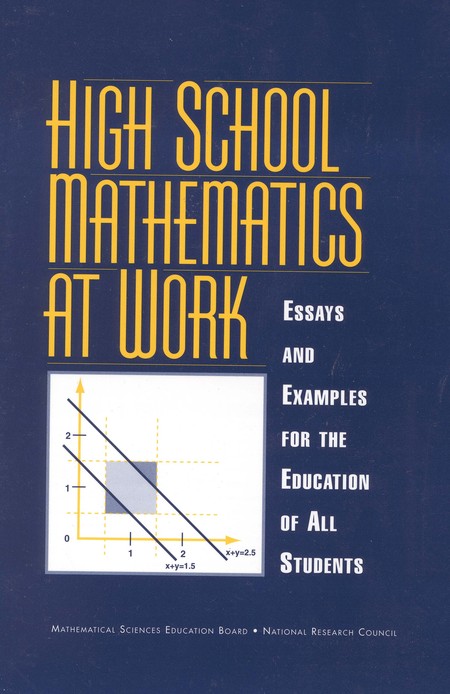 High School Mathematics at Work illuminates the interplay between technical and academic mathematics. This collection of thought-provoking essays—by mathematicians, educators, and other experts—is enhanced with illustrative tasks from workplace and everyday contexts that suggest ways to strengthen high school mathematical education.

This important book addresses how to make mathematical education of all students meaningful—how to meet the practical needs of students entering the work force after high school as well as the needs of students going on to postsecondary education.

The short readable essays frame basic issues, provide background, and suggest alternatives to the traditional separation between technical and academic mathematics. They are accompanied by intriguing multipart problems that illustrate how deep mathematics functions in everyday settings—from analysis of ambulance response times to energy utilization, from buying a used car to "rounding off" to simplify problems.

Experts discuss how to develop curricula so that students learn to solve problems they are likely to encounter in life—while also providing them with approaches to unfamiliar problems. The book also addresses how teachers can help prepare students for postsecondary education.

For teacher education the book explores the changing nature of pedagogy and new approaches to teacher development. What kind of teaching will allow mathematics to be a guide rather than a gatekeeper to many career paths? Essays discuss pedagogical implication in problem-centered teaching, the role of complex mathematical tasks in teacher education, and the idea of making open-ended tasks—and the student work they elicit—central to professional discourse.

High School Mathematics at Work presents thoughtful views from experts. It identifies rich possibilities for teaching mathematics and preparing students for the technological challenges of the future. This book will inform and inspire teachers, teacher educators, curriculum developers, and others involved in improving mathematics education and the capabilities of tomorrow's work force.