Visit NAP.edu/10766 to get more information about this book, to buy it in print, or to download it as a free PDF.
Page i Share Cite
Suggested Citation:"Front Matter." Institute of Medicine and National Research Council. 1985. Injury in America: A Continuing Public Health Problem. Washington, DC: The National Academies Press. doi: 10.17226/609.
×

Preface Throughout history, the two major causes of early death have been infectious disease and injury. For most of the world, they continue to be the major determinants of longevity. In the developed countnes, inroads have been made in the battle against infectious disease, but injury continues to take its toll relentless, unexpected by those in- volved, and yet often avoidable and unnecessary. Injury is the principal public health problem in America today; it affects primarily the young and will touch one of every three A~ner- icans this year. B'ut injury is a problem that can be diminished con- siderably if adequate attention and support are directed to it. Exciting opportunities to understand and prevent injures and to reduce their effects are at hand. The alternative is the continued loss of health and life to predictable, preventable, and modifiable injures. In 1966, a landmark National Research Council report, Accidental Death and Disability: The Neglected Disease of Modern Society, documented how little progress had been made in either explicating the scientific aspects of injury control or applying what was known. More than 2.5 million Americans have died from injures since that report was issued. In 1983, Congress enacted a law authorizing the secretary of the Department of Transportation to request a study on trauma (injury) by the National Academy of Sciences, to deternune what is known about injurer, what research should be done to learn more, and what arrange- ments the federal government could use to increase and improve the knowledge of injury. In response to that authorization, the Committee on Trauma Research, in the National Research Council's Commission on Life Sciences, was established in collaboration with the Institute of Medicine. This report, the result of the committee's deliberations, reviews the progress that has been made in injury control in recent years and id'endfies future research needs. The committee believes that injury is a public health problem whose toll is unacceptable. The time has come for the nation to address this problem a problem that affects ah Americans and one on which an investment in research could yield an unprecedented public health return. WILLIAM H. FOEGE Chairman v

Next: Executive Summary »
Injury in America: A Continuing Public Health Problem Get This Book
× 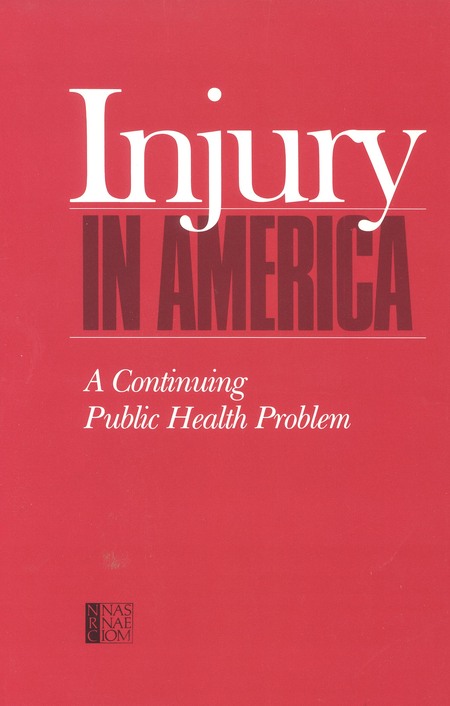 "Injury is a public health problem whose toll is unacceptable," claims this book from the Committee on Trauma Research. Although injuries kill more Americans from 1 to 34 years old than all diseases combined, little is spent on prevention and treatment research. In addition, between $75 billion and $100 billion each year is spent on injury-related health costs. Not only does the book provide a comprehensive survey of what is known about injuries, it suggests there is a vast need to know more. Injury in America traces findings on the epidemiology of injuries, prevention of injuries, injury biomechanics and the prevention of impact injury, treatment, rehabilitation, and administration of injury research.