Visit NAP.edu/10766 to get more information about this book, to buy it in print, or to download it as a free PDF.
Page i Share Cite
Suggested Citation:"Front Matter." National Research Council. 1983. Rethinking Urban Policy: Urban Development in an Advanced Economy. Washington, DC: The National Academies Press. doi: 10.17226/80.
×

To Harvey S. Perloff (1915-1983) scholar, educator, planner, and inspiration to those who would make cities better places to live

Preface The Committee on National Urban Policy, established by the National Research Council (NRC) in 1981 with support from the U.S. Department of Housing and Urban Development, the U.S. Department of Commerce, the Ford Foundation, and the German Marshall Fund of the United States, was charged with responsibility for evaluating past urban policies, con- tinuing review of current policies, examining the experiences of other advanced nations with urban policy, and developing policy options and recommendations for the future. During the earliest stages of its deliberations, the committee decided that it could contribute most to the discussion of urban policy by addressing basic conditions or trends that seem likely to shape the future course of urban development and raise issues that public policy must face. Tradi- tional approaches to urban policy that deal with a series of functional problems housing, neighborhood and commercial district deterioration, transportation, urban poverty have often failed to produce unified and lasting policies not because the problems are unimportant, but because they often tend to be derivative of more fundamental social and economic forces at work in cities and suburbs. It is also important to view urban areas as whole economic entities rather than solely in terms of political jurisdictions. The first task of the committee, therefore, was to identify and describe those fundamental issues that we believed would shape the ways in which urban areas will develop over the next two decades and would frame the issues with which urban policies must contend. We also believed that . . V11

. . . V111 Preface national urban policy had to comprehend actions that could be taken at the state and local as well as at the federal level of government. This approach was reflected in the first major report of the committee, Critical Issues for National Urban Policy (National Research Council, 1982a). That report discussed five issues that will shape urban policy in the years to come: (1) the mobility of people and jobs, (2) the rise of an urban underclass, (3) changes in the allocation of responsibility for urban pro- grams in the federal system, (4) changing relationships between the public and private sectors of the economy, and (5) the condition of urban in- frastructure. The committee has also published a background paper, "The Evolution of National Urban Policy, 1970-1980" (Hanson, 1982), and a report on an international conference it conducted, National Policy and the Post-Industrial City (National Research Council, 1982b). Together these reports laid a foundation for this study, which is concerned with how urban policies might respond to the substantial changes that have occurred in the structure of the national economy. The impact of structural change on urban areas was identified at the outset of the committee's work as perhaps the most important single issue with which urban policy must grapple in the coming years. While various aspects of the subject have been widely discussed particularly the prob- lems of shifting investments from some parts of the economy to others and of retraining the labor force to adjust to these shifts in investment- there has been relatively little treatment of how these shifts affect the urban areas in which the employment centers and workers are located. Fortunately, there is growing scholarly and public interest in this matter, and there is an expanding literature in industrial economics, technological change, urban economics, and local labor markets from which to draw information and insights. Early in our deliberations we recognized the importance of the growth of the service sector, and of changes within that sector, as crucial to our inquiry. A small group of committee members met in May 1982 with Thomas M. Stanback, Jr., Wilbur Thompson, Richard Knight, and Daniel Garnick to assay the state of knowledge of services in the American economy and to identify major policy issues. Work by Stanback and his colleagues at the Conservation of Human Resources project at Columbia University has been of great help to the committee in understanding both the services as such and the ways in which urban areas are adjusting to structural changes in their economies. The committee is also indebted to Daniel Garnick, for help in developing useful data on these changes, and to Richard Knight, for preparation of a special paper on transition strat- egies. Special thanks are due to Gordon L. Clark, who, during the de- velopment of this study, was an NRC fellow attached to the committee.

Preface i. x His several papers on urban labor markets contributed important concep- tual and empirical support to the committee's work. His recently published book, Interregional Migration: National Policy and Social Justice, was initially prepared as a special issue paper for the committee and was of great help in the preparation of Chapter 6. Many others have contributed to the work of the committee. John Rees who became an NRC fellow in January 1983, has made a number of contributions to the committee's work. Judith May of the Office of Urban Policy, U.S. Department of Housing and Urban Development, has been especially helpful and supportive of the committee's work. Susan Ingra- ham, Julie Goldflies Quinn, and Kim Hong Lethi wrote background ma- terials or special papers used to prepare this report. A number of others read earlier versions of the report and offered helpful criticisms and com- ments. They include Ian Dawson, Henry Doll, Eli Ginzberg, Peter Hall, Philip Hammer, Don Hicks, Debbie Matz, Thierry Noyelle, Charles Orlebeke, and Ralph Widner. No report could be produced without the hard, essential, and accurate work of the editors and administrative staff, and the committee is grateful to members of the staff of the Commission on Behavioral and Social Sciences and Education. Christine L. McShane edited the manuscript and gave valuable advice on how to make the report a clearer and more effective statement of its ideas. Diane L. Goldman, Ann G. Polvinale, and Sarah M. Streuli prepared the original typescripts and innumerable changes and redrafts as the report passed through its many stages. The committee also enjoyed the consistent support of the executive director, David A. Goslin; the associate executive director, Heidi I. Hartmann; and the associate director for reports, Eugenia Grohman. Rose S. Kaufman kept our ac- counts and gave frequent help on administrative matters. The work of each one is deeply appreciated. Our thanks to all who helped are profuse. But those cited and each member of the committee know that our greatest debt of gratitude is owed to Royce Hanson, study director of the project. With minimal resources at his disposal and with a committee far-flung and diverse in its mem- bership, Royce more than anyone else gave the project its energy, sub- stance, and coherence. As this report was being readied for publication, Harvey S. Perloff died. Harvey was the moving force behind the creation of the committee and served as chair until his health required him to step aside in 1982. He remained an active member, however, and this report carries the imprint of his guidance and thought. As an educator, planner, and activist, Harvey was never content to accept existing ideas even his own as adequate for tomorrow's problems. From the outset of our work he insisted that

x Preface the role of the committee should be to rethink and reconstruct the basis for urban policy. To the extent that this report meets that test, it reflects Harvey's intellectual spirit. The committee fully appreciates that no study that makes policy pro- posals can claim to be completely objective or that the recommendations are inevitable conclusions from the data and information. Policies represent choices; our proposals for urban policy are no different, and some of our choices will no doubt be controversial. We have made them not to reject other alternatives as unsound but as a statement of preference about which reasonable people may disagree. Our purpose, therefore, is not so much to offer a prescription as it is to stimulate a more vigorous and informed dialogue about the role and purpose of urban policy in the spectrum of national economic policy. Paul N. Ylvisaker, Chair Committee on National Urban Policy

XIV 10. Estimated Numbers of Dislocated Workers in January 1983 Under Alternative Criteria and Economic Assumptions 11. Federal Costs of Providing Readjustment Services to Dislocated Workers Defined by Selected Criteria, FY 1983 FIGURES 1. Percentage Distribution of Full-Time-Equivalent Em- ployees Among Industries, 1948- 1977 2. The Transition in Cleveland, 1954-1976 3. Shares of the Gross National Product for Services and Nonservices, 1948- 1978 and 1990-2030 4. Economic Performance of Cities and Their Regions 5. Classification Scheme of the 140 Largest Metropolitan Areas Tables and Figures 103 117 20 23 32 37 40

Next: 1 Overview »
Rethinking Urban Policy: Urban Development in an Advanced Economy Get This Book
× 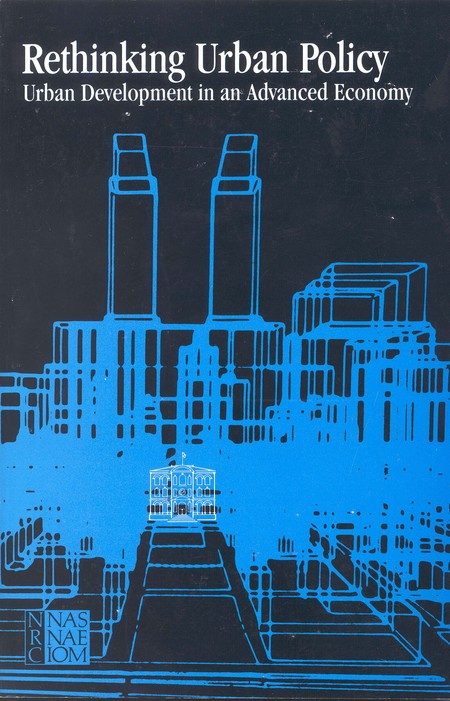