Visit NAP.edu/10766 to get more information about this book, to buy it in print, or to download it as a free PDF.
Page i Share Cite
Suggested Citation:"Front Matter." National Academy of Sciences. 1987. Biographical Memoirs: Volume 56. Washington, DC: The National Academies Press. doi: 10.17226/897.
×

The National Academy of Sciences was established in 1863 by Act of Con- gress as a private, nonprofit, self-governing membership corporation for the furtherance of science and technology, required to advise the federal government upon request within its fields of competence. Under its cor- porate charter the Academy established the National Research Council in 1916, the National Academy of Engineering in 1964, and the Institute of Medicine in 1970. INTERNATIONAL STANDARD BOOK NUMBER 0-309-03693-3 LIBRARY OF CONGRESS CATALOG CARD NUMBER 5-26629 Available from NATIONAL ACADEMY PRESS 2 101 CONSTITUTION AVENUE, N.W., WASHINGTON, D.C. 20418 PRINTED IN THE UNITED STATES OF AMERICA

PREFACE The Biographical Memoirs is a series of volumes, beginning in IS77, containing the biographies of (lecease(1 members of the National Academy of Sciences and bibliographies of their published scientific contributions. The goal of the Academy is to have these memoirs serve as a contribution toward the history of American science. Each biographical essay is writ- ten by an individual familiar with the discipline and the scien- tific career of the cleceased. These volumes, therefore, pro- vide a record of the lives and works of some of the most clistinguishect leaders of American science as witnessed and interpreted by their colleagues and peers. Though the pri- mary concern is the members' professional lives and contri- butions, these memoirs also inclucle those aspects of their lives in their home, school, college, or later life that lecl them . . . ,` to t nelr sclentlhc career. The National Academy of Sciences is a private, honorary organization of scientists and engineers elected on the basis of outstanding contributions to knowledge. EstablishecT by a Congressional Act of Incorporation on March 3, 1863, the Academy works to further science and its use for the general welfare by bringing together the most qualified individuals to clear with scientific and technological problems of broad . ,~ slgnlncance. BRYCE CRAWFORD, JR. Home Secretary CAROLINE K. McEUEN Associate Editor vii

Next: Richard McLean Badger »
Biographical Memoirs: Volume 56 Get This Book
× 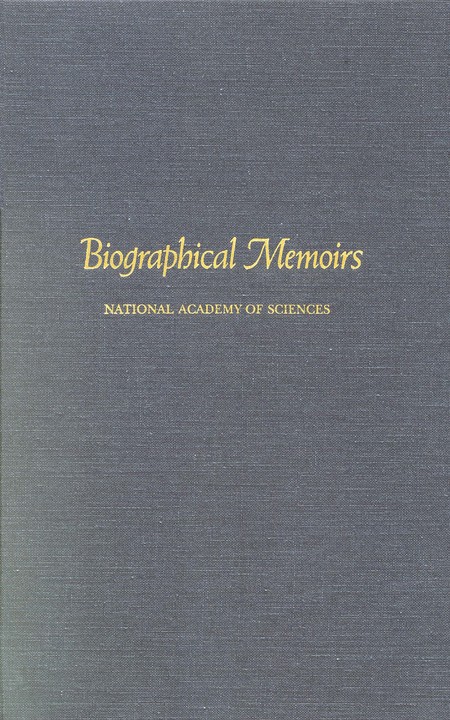 Biographic Memoirs: Volume 56 contains the biographies of deceased members of the National Academy of Sciences and bibliographies of their published works. Each biographical essay was written by a member of the Academy familiar with the professional career of the deceased. For historical and bibliographical purposes, these volumes are worth returning to time and again.