Chapter:7 Liver and Other Organ Toxicity of Permethrin

Get This Book
Visit NAP.edu/10766 to get more information about this book, to buy it in print, or to download it as a free PDF.
« Previous: 6 Neurotoxicity of Permethrin
Page 73 Share Cite
Suggested Citation:"7 Liver and Other Organ Toxicity of Permethrin." National Research Council. 1994. Health Effects of Permethrin-Impregnated Army Battle-Dress Uniforms. Washington, DC: The National Academies Press. doi: 10.17226/9274.
×

7 Liver and Other Organ Toxicity of Permethrin

Specific studies of human liver changes have not been conducted, although extensive medical investigations of workers exposed to permethrin did not reveal any clinical chemistry changes (serum enzymes) that would suggest liver toxicity (Prinsen and van Sittert, 1978).

The most significant (morphologically recognizable) toxicological effect of permethrin involves the liver. It is characterized by an increase (absolute and relative) in weight, but takes several repeated exposures to be evident. The lowest dose that has been reported to cause a significant increase in liver weight occurred after animals ingested 100 mg/kg for 26 weeks. Sex-related differences in liver enlargement have been reported but are not consistent. Female rats exhibited an increase in liver weight and in liver-to-body-weight ratio when fed a diet containing permethrin at 1,000 mg/kg of diet, whereas that effect was observed in male rats at 2,500 mg/kg of diet (Clapp et al., 1977b). However, in an-

other study, increase in relative liver weight was observed at 1,000 mg/kg of diet in male rats and at 3,000 mg/kg of diet in female rats (Butterworth and Hend, 1976). The increase in liver weight is due to hepatocellular hypertrophy. Necrotic foci, vacuolization, and increased eosinophilia also have been observed. Hepatocellular hypertrophy is characterized ultrastructurally by an increase in endoplasmic reticulum, which is functionally associated with increased microsomal activity and an increase in cytochrome-P-450-mediated enzymes (Bradbrook et al., 1977) (see Chapter 4). These changes are largely reversible after ceasing exposure, although microsomal activity is still slightly increased. An increase in specific liver-related enzymes (SGOT, GPT, and LDH) has been observed in blood serum of rats at clearly toxic doses (near the LD50) (Wallwork et al., 1974a).

In a reproductive toxicity study, 12 male and 24 female Long-Evans rats were fed permethrin (purity unknown, cis/trans ratio, 40:60) at 0, 20, or 100 ppm (0, 1, or 5 mg/kg per day) for three generations with two litters per generation (Hodge et al., 1977). Hepatic centrilobular hypertrophy, evaluated histologically only in F3b weanlings, was observed at all doses. This liver effect was not considered an adverse reproductive or developmental effect but rather a systemic effect similar to that observed in adult rats at high doses in the studies on chronic toxicity and oncogenicity of permethrin. Liver effects observed in chronic carcinogenicity studies are discussed in Chapter 11.

No organs have been identified as showing lesions related to permethrin exposure. Clinical signs and symptoms of central nervous system intoxication have been reported (see Chapter 6).

Lesions in other organs in response to permethrin exposure have been observed only at very high doses. Dogs exposed to 500 or 2,000 mg/kg (orally) for 3 months showed only significant liver enlargement (Killeen and Rapp, 1976a), but when exposed to 250 mg/kg for 6 months more, overt changes were a decrease in food intake; relative increase in liver, heart, and kidney weight; and perturbations in hematological and serum chemistry values (Reynolds et al., 1978).

The liver is the only organ to consistently show evidence of change after chronic permethrin exposure. There is an increase in liver weight characterized microscopically by hepatocellular swelling. Ultrastructurally, there is an increase in endoplasmic reticulum, which is reflected in an increase in microsomal enzymes and serum enzymes specific to the liver.

The subcommittee concluded that the NOAEL of 10 mg/kg per day from the available liver toxicity data shows that daily exposure to permethrin-impregnated uniforms at a level of 6.8 × 10−5 mg/kg per day provides a MOS of approximately 150,000 for liver toxicity.

Therefore, liver toxicity that might result from wearing permethrin-impregnated BDUs or working with treated fabric should not be a concern.

The subcommittee recognizes the limitations of extrapolating from oral toxicity studies to effects expected from dermal exposures, because such an extrapolation can introduce quantitative errors if the underlying assumptions are not true. However, in the absence of data from dermal exposure studies, extrapolation from other routes is done by default. In general the dermal toxicity of chemical contaminants is less than the oral toxicity, because less chemical is absorbed dermally than orally. Furthermore, in light of the very high LD 50 of permethrin by the dermal route in acute exposure studies—greater than 2,500 mg/kg—the possibility of dermal toxicity from low-level exposures is remote.

Next: 8 Immunotoxicity of Permethrin »
Health Effects of Permethrin-Impregnated Army Battle-Dress Uniforms Get This Book
× 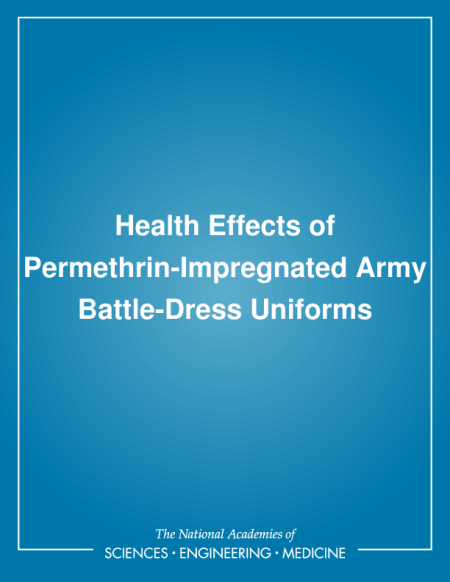