Proceedings of the Workshop on Promoting Access to Scientific and Technical Data for the Public Interest: An Assessment of Policy Options (1999)

Get This Book
Visit NAP.edu/10766 to get more information about this book, to buy it in print, or to download it as a free PDF.
Page i Share Cite
Suggested Citation:"Front Matter." National Research Council. 1999. Proceedings of the Workshop on Promoting Access to Scientific and Technical Data for the Public Interest: An Assessment of Policy Options. Washington, DC: The National Academies Press. doi: 10.17226/9693.
×

PROCEEDINGS OF THE WORKSHOP ON PROMOTING ACCESS TO SCIENTIFIC AND TECHNICAL DATA FOR THE PUBLIC INTEREST: AN ASSESSMENT OF POLICY OPTIONS

The National Research Council was organized by the National Academy of Sciences in 1916 to associate the broad community of science and technology with the Academy's purposes of furthering knowledge and advising the federal government. Functioning in accordance with general policies determined by the Academy, the Council has become the principal operating agency of both the National Academy of Sciences and the National Academy of Engineering in providing services to the government, the public, and the scientific and engineering communities. The Council is administered jointly by both Academies and the Institute of Medicine. Dr. Bruce Alberts and Dr. William A. Wulf are chairman and vice chairman, respectively, of the National Research Council.

This volume is available only in electronic form on the National Academy Press
Web site at <http://www.nap.edu>.

Copyright © 1999 by the National Academy of Sciences. All rights reserved.

University of Nebraska, College of Law

University of California at Davis

Acting Executive Director (as of August 1999)

In response to a request from several federal science agencies, the Committee for a Study on Promoting Access to Scientific and Technical Data for the Public Interest see (Appendix A) undertook a study to identify and evaluate the various existing and proposed policy approaches (including related legal, economic, and technical considerations) for protecting the proprietary rights of private-sector database rights holders while promoting and enhancing access to scientific and technical (S&T) data for public-interest uses. Specifically, the sponsors asked the study committee to address the following issues:

In responding to its charge, the committee made significant efforts to obtain broad input from representatives of the main identified interest groups, primarily through a workshop that was held on January 14-15, 1999, at the main Department of Commerce building in Washington, D.C. (Appendix B gives the agenda and lists the participants). This publication is the proceedings of that workshop, which were taped, and then subsequently transcribed and edited. In addition, the committee also commissioned a paper, “Raw Knowledge: Protecting Technical Databases for Science and Industry,” for use at its workshop see (Appendix C). The views expressed in this Proceedings report are solely those of the individual authors and workshop participants. It does not provide conclusions or recommendations.

The committee also met on two other occasions to gather information and to work on its study report, A Question of Balance: Private Rights and the Public Interest in Scientific and Technical Databases, which is available online via the National Academies Web site at <www.nap.edu> and in hard copy from the Commission on Physical Sciences, Mathematics, and Applications and the National Academy Press.

It is our hope that these Proceedings, along with the committee's report, will help the sponsors of the study, the legislators examining database protection proposals, and the broader

S&T community to understand better the issues in striking a proper balance between protecting rights in and promoting public-interest uses of scientific and technical databases.

The study committee wishes to express its sincere thanks to the many individuals who played significant roles in the completion of this study. The committee sponsored the Workshop on Promoting Access to Scientific and Technical Data for the Public Interest: An Assessment of Policy Options on January 14-15, 1999, at the Department of Commerce in Washington, D.C., and it extends its thanks to the following individuals who made presentations during the January 14, 1999, plenary session: Q. Todd Dickinson, acting commissioner of Patents and Trademarks, Department of Commerce, gave the keynote address; Barbara Ryan of the U.S. Geological Survey and Barry Glick, formerly with GeoSystems Global Corporation, participated in the geographic data panel; G. Christian Overton of the University of Pennsylvania's Center for Bioinformatics, James Ostell of the National Library of Medicine 's National Center for Biotechnology Information, and Myra Williams with the Molecular Applications Group participated in the genomic data panel; Richard Kayser of the National Institute of Standards and Technology, James Lohr of the American Chemical Society's Chemical Abstracts Service, and Leslie Singer of ISI, Inc., participated in the panel that discussed chemical and chemical engineering data; Kenneth Hadeen of the National Oceanic and Atmospheric Administration 's National Climatic Data Center (retired), David Fulker of the University Corporation for Atmospheric Research's Unidata Program, and Robert Brammer of TASC participated in the meteorological data panel; Richard Gilbert of the University of California at Berkeley discussed economic factors in the production, dissemination, and use of scientific and technical databases in the public and private sectors; Stephen Maurer, attorney, submitted a commissioned paper for the study (reprinted as Appendix C of this Proceedings report); Teresa Lunt of the Xerox Palo Alto Research Center provided an overview of the current situation and future prospects with respect to technologies for protecting and also for misappropriating digital intellectual property rights; Marybeth Peters, Register of Copyrights in the Library of Congress, provided a summary overview of the existing and proposed intellectual property rights regimes for databases; and Justin Hughes, of the Department of Commerce's Patent and Trademark Office, summarized the relevant federal government information law and data policies. The aforementioned data panelists also participated in the January 14, 1999, discussion sessions on not-for-profit-sector data, government-sector data, and commercial-sector data.

The committee would also like to thank those who participated as panelists in the January 15, 1999, discussion sessions on the potential impacts of legislation and assessments of policy options during the workshop. Jon Baumgarten of Proskauer Rose LLP, Peter Jaszi of the American University School of Law, James Neal of the John Hopkins University Library, and Ferris Webster of the University of Delaware joined Kenneth Hadeen, David Fulker, and Robert Brammer in discussing what would happen should Congress decide to enact a strong property rights model for protecting databases. Dennis Benson of the National Center for Biotechnology Information, Jonathan Band of Morrison & Foerster, LLP, and Thomas Rindfleisch of Stanford University's Lane Medical Library discussed, with Chris Overton and Myra Williams, the possible scenarios should Congress enact an unfair competition model for protecting databases. Prue Adler of the Association of Research Libraries, Eric Massant of Reed Elsevier, Inc., Tim Foresman of the University of Maryland, and Kenneth Frazier of the University of Wisconsin Libraries joined Barry Glick in a discussion assessing legal and policy options in promoting access to and use of government scientific and technical data for the public interest. Finally, Jerome Reichman of the Vanderbilt University School of Law and R. Stephen Berry of the

University of Chicago discussed possible legal and policy options associated with promoting access to and use of not-for-profit-sector S&T data for the public interest with Richard Kayser, James Lohr, and Leslie Singer. The committee is also very appreciative of the contributions of more than 100 individuals who attended the workshop. In addition, it extends its gratitude to Jean Schiro-Zavela, of the National Oceanic and Atmospheric Administration, and Justin Hughes, of the Patent and Trademark Office, for helping to make arrangements for the workshop.

These Proceedings have been reviewed in draft form by individuals chosen for their diverse perspectives and technical and legal expertise, in accordance with procedures approved by the National Research Council's Report Review Committee. The purpose of this independent review is to provide candid and critical comments that will assist the institution in making the published report as sound as possible and to ensure that the report meets institutional standards for objectivity, evidence, and responsiveness to the study charge. The review comments and draft manuscript remain confidential to protect the integrity of the deliberative process. The study committee would like to thank the following individuals for their participation in the review of these Proceedings: George Annas of Boston University, Boie Carroll of Information International Associates, Inc., John Estes of the University of California at Santa Barbara, David Lide, Jr., publishing consultant, and Goetz Oertel of the Association of Universities for Research in Astronomy.

Finally, the committee would like to recognize the contributions of the National Research Council staff without whom this report could not have been completed: Paul Uhlir, director of International Scientific and Technical Information Programs of the Office of International Affairs, who served as study director and organized the workshop and other study committee meetings; Julie Esanu, who provided research and program assistance to the committee, as well as editorial work on the workshop Proceedings; Barbara Wright and Pamela Gamble for the staff support to the committee; and Susan Maurizi and Janet Overton, who edited the final committee report and the Proceedings.

Next: Contents »
Proceedings of the Workshop on Promoting Access to Scientific and Technical Data for the Public Interest: An Assessment of Policy Options Get This Book
× 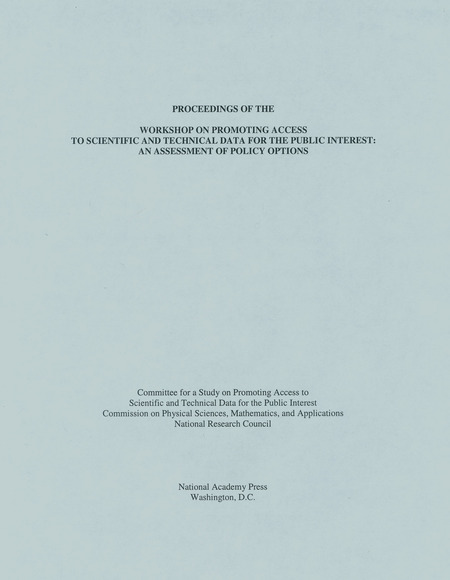