Get This Book
Visit NAP.edu/10766 to get more information about this book, to buy it in print, or to download it as a free PDF.
Page i Share Cite
Suggested Citation:"Front Matter." National Research Council. 2000. Cooperation in the Energy Futures of China and the United States. Washington, DC: The National Academies Press. doi: 10.17226/9736.
×

COOPERATION IN THE ENERGY FUTURES OF CHINA AND THE UNITED STATES

This study was supported by Grant No. DE-FG01-98EEE35047 between the National Academy of Sciences and the U.S. Department of Energy Grant Number C826453-01-0 from the U.S. Environmental Protection Agency and funds provided by the U.S. National Academies. The Chinese Academy of Sciences and the Chinese Academy of Engineering each provided funds to cover costs of their participation in this study. Any opinions, findings, conclusions, or recommendations expressed in this publication are those of the author(s) and do not necessarily reflect the views of the organizations or agencies that provided support for the project.

Cui Zhengxin — University of Science and Technology of China

We wish to thank the U.S. Department of Energy, the Environmental Protection Agency, the U.S. National Academies, the Chinese Academy of Sciences, and the Chinese Academy of Engineering for their financial support of this project. The committee also wishes to thank Lawrence Berkeley National Laboratory for hosting a meeting of this group, and the Sierra Pacific Power Company for a visit to the Piñon Pine Power Project. Finally the committee wishes to thank all the individuals consulted over the course of preparing this paper, especially those of the Energy Information Administration; these informal consultations were an invaluable component of this committee’s work.

We would like to recognize the contributions made by Inta Brikovskis, Staff Officer at the NRC, and those of Feng Liu, an independent consultant to the NRC. Douglas Bauer, Executive Director of the Commission on Engineering and Technical Systems at the NRC also deserves recognition for his work in helping conceptualize this project and in forming the committee.

This report has been reviewed by individuals chosen for their diverse perspectives and technical expertise, in accordance with the procedures approved by the NRC’s Report Review Committee. The purpose of this independent review is to provide candid and critical comments that will assist the NRC in making the published report as sound as possible and to ensure that the report meets institutional standards for objectivity, evidence, and responsiveness to the study charge. The content of the review comments and draft manuscript remain confidential to protect the integrity of the deliberative process. We wish to thank the individuals listed below, who are neither officials nor employees of the NRC, for their participation in the review of this report. While the individuals listed below have provided many constructive comments and suggestions, it must be emphasized

that the responsibility for the final content of this report rests entirely with the authoring committee, the NRC, and the Chinese Academies of Sciences and Engineering.

Donald L. Guertin — Director, Program on Energy and the Environment, The Atlantic Council of the United States

This report was also simultaneously reviewed by a Chinese Report Review Committee. We wish to thank the Chinese reviewers listed below who provided many significant comments and suggestions for the report.

Adequate supplies of energy at reasonable costs are essential for long-term economic prosperity and social development, and to correct past environmental problems as well as to prevent new ones.

The energy futures of China and the United States are intimately linked: both countries draw on the same international sources for imported oil and are affected by changes in its price and availability, and both countries will be depending on similar energy technologies and will jointly benefit from technological advancements. Energy production, conversion and use has significant environmental consequences, and these consequences in both countries have similar potential to benefit and to harm.

Environmental consequences from energy production, conversion, and use also provide a linkage between the two countries: similar technologies and practices can be used to prevent pollution; damage in each of our countries is of interest to the other because we share a common world heritage and concern for our peoples. Moreover, environmental consequences can be transboundary—for example pollution of the shared oceans and atmosphere; and they can also be global, as in the emission of greenhouse gases.

The two countries share some of the same challenges, for example: improving energy efficiency; increasing the contribution of cleaner energy supply to lessen local, regional and global pollution; reducing the harmful effects from coal combustion; increasing the efficiency of petroleum extraction and use; and increasing the use of renewable energy resources. However, they have complementary and mutually supporting abilities to contribute to meeting these challenges. Each country has experience in specific technological fields. Each country has advantages in implementing the next stage in technological develop-

ment—for instance, China may provide the opportunity for installation of next-generation nuclear power facilities or clean coal technologies, and its unserved rural regions may be ideal for proving next-generation renewable distributed power systems such as solar. In comparison, the United States has a longer history in electric generation and can develop the techniques and practices for improving reliability and efficiency of power plants and for extending their useful life. Consequently, the two countries can make more progress working together, using each other’s strengths, than they can working separately.

China and the United States will play an important role in the world’s energy future. Together they comprise just over a quarter of the world’s population and account for over a third of total world energy use. Both have maintained strong and growing economies in spite of a global downturn and the Asian economic crisis. The United States ranks first in energy consumption and production and is responsible for about 24 percent of the world’s energy-related carbon emissions. China is second in energy consumption and accounts for 13 percent of global energy-related carbon emissions. In addition, China is a leader among the industrializing countries of the world and the United States among the industrialized. Their example will be studied and may be emulated around the world.

Our conclusion is that cooperation on energy matters is in the best interest of both the United States and of China. Further, this cooperation will have beneficial effects on other countries as well. Therefore it is vitally important for the two countries to develop and sustain the kind of intellectual, economic and political relationships that will foster cooperation in our long-term energy futures.

In a January 1997 meeting of the Presidents of the NAS and the CAS, Dr. Alberts and Dr. Zhou proposed that a cooperative program on energy be undertaken by the four Academies (NAS, NAE, CAS, and CAE). Members of four Academies and several energy experts were organized to implement this report which is aimed at identifying initiatives and providing recommendations to both governments. It is our hope that the result will be helpful to both China and the United States, as well as to other countries.

The group from the four Academies responsible for this study of challenges and cooperative opportunities in the energy sectors of China and the United States has examined the likely trajectories of each country’s energy development from the present to the year 2020. Given the long life cycles of energy infrastructure, the decisions made by our respective governments—and the cooperation between them in the period discussed in this study—will have implications reaching far beyond the next few decades. Cooperation in both the short and near term can make a critical contribution to a sustained energy future for our nations who, being the largest countries and economies in the developed and the developing world, set an example for other nations.

The paper which follows is a consensus document. All members of the U.S. and Chinese committee have agreed to each of the conclusions and recommendations.

Next: Executive Summary »
Cooperation in the Energy Futures of China and the United States Get This Book
× 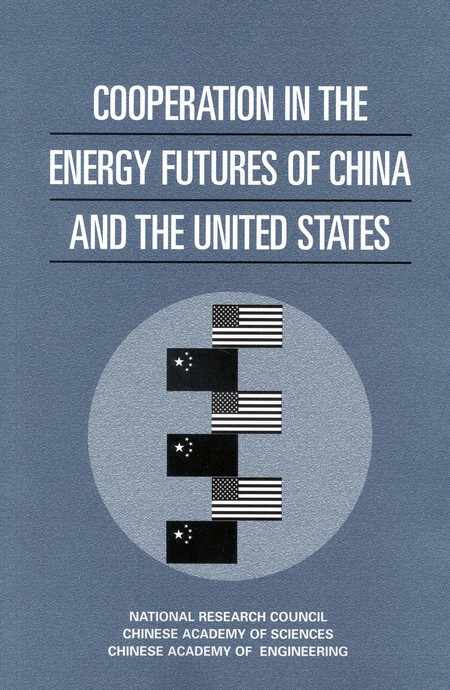 Today we recognize the importance of the pending transition in energy resource utilization in the coming century. Two major players in this transition will be two of the world's superpowers—China and the United States. Cooperation in the Energy Futures of China and the United States focuses on collaborative opportunities to provide affordable, clean energy for economic growth and social development, to minimize future energy concerns, environmental threats to our global society, and the health and economic impacts on energy production and use.