Get This Book
Visit NAP.edu/10766 to get more information about this book, to buy it in print, or to download it as a free PDF.
« Previous: 2 The Uninhabited Air Vehicle as a System
Page 37 Share Cite
Suggested Citation:"Part II Vehicle Technologies." National Research Council. 2000. Uninhabited Air Vehicles: Enabling Science for Military Systems. Washington, DC: The National Academies Press. doi: 10.17226/9878.
×

Part II identifies technical needs and opportunities for research and development for major UAV subsystem technologies. The committee considered five areas in its analysis of air vehicle technologies: aerodynamics (and vehicle configuration), airframe (with a focus on materials and structures), propulsion systems, power and related technologies, and controls.

Each notional vehicle type represents a class of vehicles, not a conceptual aircraft design suited to a particular mission. For example, the HALE class could include a reconnaissance air vehicle with an endurance of several days, as well as a very different vehicle with indefinite endurance.

The HALE vehicle type provided a focus on long-term technical advances for generation-after-next reconnaissance and surveillance aircraft. The key attributes of HALE vehicles will be operation at very high altitudes (> 65,000 feet) and long endurance (from days to “indefinite” duration). The committee believes that future aircraft intended to operate at altitudes above 65,000 feet will be

uninhabited, so the issues associated with the design and operation of these aircraft should be considered UAV-unique. The committee focused on high-altitude technologies, especially aerodynamics/vehicle configuration and propulsion systems. HALE vehicles would generally be flight configured, with an emphasis on structural efficiency (light weight) to provide endurance. Because of the lightweight structures and large wingspans typical of HALE vehicles, aeroelasticity is an important factor. HALE vehicles would be generally autonomous and programmable because a key reason for using UAVs for long-duration missions is to avoid operator fatigue and reduced vigilance due to monotony.

Next: 3 Aerodynamics »
Uninhabited Air Vehicles: Enabling Science for Military Systems Get This Book
× 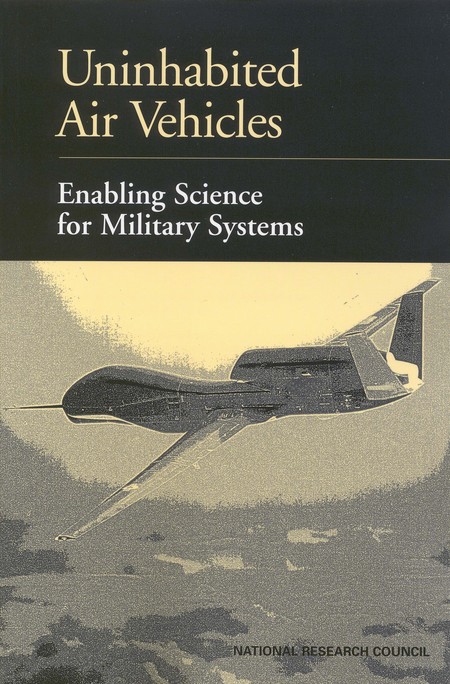 U.S. Air Force (USAF) planners have envisioned that uninhabited air vehicles (UAVs), working in concert with inhabited vehicles, will become an integral part of the future force structure. Current plans are based on the premise that UAVs have the potential to augment, or even replace, inhabited aircraft in a variety of missions. However, UAV technologies must be better understood before they will be accepted as an alternative to inhabited aircraft on the battlefield. The U.S. Air Force Office of Scientific Research (AFOSR) requested that the National Research Council, through the National Materials Advisory Board and the Aeronautics and Space Engineering Board, identify long-term research opportunities for supporting the development of technologies for UAVs. The objectives of the study were to identify technological developments that would improve the performance and reliability of "generation-after-next" UAVs at lower cost and to recommend areas of fundamental research in materials, structures, and aeronautical technologies. The study focused on innovations in technology that would "leapfrog" current technology development and would be ready for scaling-up in the post-2010 time frame (i.e., ready for use on aircraft by 2025).