Preventing the Forward Contamination of Europa (2000)

Get This Book
Visit NAP.edu/10766 to get more information about this book, to buy it in print, or to download it as a free PDF.
Page i Share Cite
Suggested Citation:"Front Matter." National Research Council. 2000. Preventing the Forward Contamination of Europa. Washington, DC: The National Academies Press. doi: 10.17226/9895.
×

Preventing the Forward Contamination of Europa

Task Group on the Forward Contamination of Europa

Support for this project was provided by Contract NASW 96013 between the National Academy of Sciences and the National Aeronautics and Space Administration. Any opinions, findings, conclusions, or recommendations expressed in this publication are those of the author(s) and do not necessarily reflect the view of the organizations or agencies that provided support for this project.

Copies of this report are available free of charge from:

TASK GROUP ON THE FORWARD CONTAMINATION OF EUROPA

Jupiter’s moon Europa is widely regarded as the most promising extraterrestrial habitat for life in the solar system. This view is based on recent evidence suggesting the presence of a water ocean beneath Europa ’s fractured icy surface together with studies of microbial life in extreme environments on Earth, which suggest that living organisms emerge wherever liquid water and some form of usable energy are found.

Naturally, there is now great interest in learning much more about Europa, primarily through a series of space probes to survey and eventually to land on the surface. But any spacecraft that transports scientific instruments can also carry terrestrial microbes. This report deals with the important issue of how to protect Europa from such inadvertent biological contamination.

To reach their conclusions, the task group had to consider many dimensions of the question. These included techniques for cleaning a spacecraft, the resilience of terrestrial organisms, the space environment at Jupiter, and cost implications of alternative planetary protection approaches. The complexity of these issues, no doubt, contributed to the fact that the task group could not reach consensus on some, but not all, aspects of their charge.

The task group’s deliberations illuminate several thorny questions dwelling on the boundary of science and ethics and point the way for further study of both technical and ethical considerations. Although one might have wished for an unequivocal answer, the complexity of the recommendations appropriately reflects the complexity of the underlying issues. In that sense, the report gives NASA’s Planetary Protection Officer a very clear message.

Europa, a planetary satellite of Jupiter, is a solar system body that may have a significant potential for past or present life. Europa has a radius of about 1,600 km, slightly less than the Moon’s, and it is probably mostly silicate and metal by mass. It has an upper layer, on the order of 80 to 170 km deep, rich in water ice. There is evidence for liquid water beneath the icy crust, first surmised from Voyager data and reinforced by Galileo data. The investigation of Europa’s biological potential forms much of the rationale for continued investigation of the satellite.

In accordance with international treaty obligations, the National Aeronautics and Space Administration (NASA) maintains a policy of planetary protection to limit the contamination of extraterrestrial bodies by terrestrial microorganisms and organic compounds during spaceflight missions. Thus, preventing the contamination of Europa ’s environment by terrestrial organisms will be required during upcoming spaceflight missions such as the orbiter that is currently scheduled for launch later in this decade.

The planetary protection procedures applied to a given spacecraft are currently determined by the nature of its mission (e.g., flyby, orbiter, or lander) and the biological interest posed by the celestial object that is its destination. A lander targeted at an object of great biological interest must undergo careful cleaning, and heat sterilization may be required if it is carrying life-detection experiments. These requirements are, however, specifically tied to the historical development of our understanding of Mars and its biological potential. Given Europa’s unique environment, applying the criteria developed for Mars may not be appropriate, and a separate assessment is warranted of the levels of cleanliness and sterilization required to prevent the contamination of Europa by spacecraft missions.

Against this background, NASA’s Planetary Protection Officer requested that the Space Studies Board undertake a study to evaluate the planetary protection requirements and methods used to prevent contamination of Europa by terrestrial organisms in future orbiter and lander missions and that it recommend any necessary changes. In particular, the Space Studies Board was asked to do the following:

In response to this request, the Space Studies Board established the Task Group on the Forward Contamination of Europa.

The work of the task group began in early April 1999 and proceeded with a series of meetings and associated presentations, discussions, and deliberations. Despite its best efforts, however, the task group was unable to reach complete agreement on a number of issues. This report describes the majority and minority viewpoints resulting from the task group’s deliberations. In particular, it describes their areas of agreement and disagreement and the implications for implementation of planetary protection requirements for future Europa missions.

This report has been reviewed by individuals chosen for their diverse perspectives and technical expertise, in accordance with procedures approved by the National Research Council’s (NRC’s) Report Review Committee.

The purpose of this independent review is to provide candid and critical comments that will assist the authors and the NRC in making the published report as sound as possible and to ensure that the report meets institutional standards for objectivity, evidence, and responsiveness to the study charge. The contents of the review comments and draft manuscript remain confidential to protect the integrity of the deliberative process. The task group thanks reviewers John Battista (Louisiana State University), Russell Doolittle (University of California, San Diego), John Kerridge (University of California, San Diego, retired), Krishan Khurana (University of California, Los Angeles), Leslie Orgel (Salk Institute for Biological Studies), Robert Pappalardo (Brown University), and M. Elisabeth Paté-Cornell (Stanford University) for their many constructive comments and suggestions. Responsibility for the final content of this report rests solely with the authoring task group and the NRC.

Next: Contents »
Preventing the Forward Contamination of Europa Get This Book
× 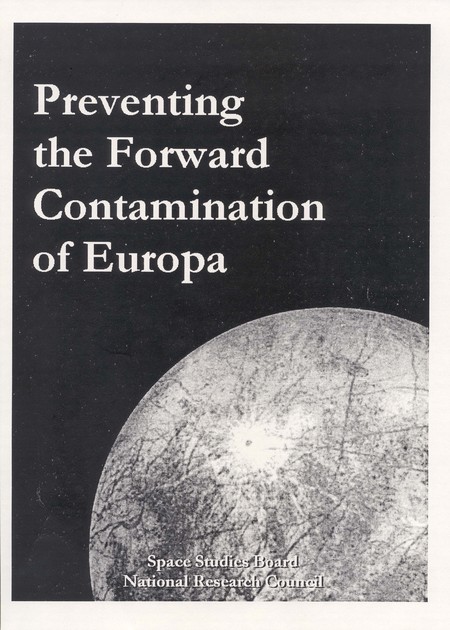