Visit NAP.edu/10766 to get more information about this book, to buy it in print, or to download it as a free PDF.
« Previous: Appendix A: U.S. Geological Survey Programs That Support Ground-Water Resources Studies
Page 138 Share Cite
Suggested Citation:"Appendix B: Biographical Sketches of Committee Members." National Research Council. 2000. Investigating Groundwater Systems on Regional and National Scales. Washington, DC: The National Academies Press. doi: 10.17226/9961.
×

Appendix B Biographical Sketches of Committee Members KENNETH R. BRADBURY is a research hydrogeologist/- professor with the Wisconsin Geological and Natural History Survey, University of Wisconsin-Extension, in Madison. He received his Ph.D. (hydrogeology, 1982) from the University of Wisconsin-Madison, his A.M. (geology, 1977) from Indiana University, and his B.A. (geology, 1974) from Ohio Wesleyan University. His current research interests include groundwater flow in fractured media, ground water recharge processes, welThead protection, and the hydrogeology of glacial deposits. VICTOR R. BAKER is regents professor and head of the Depar- trnent of Hydrology and Water Resources at the University of Arizona. He is also professor of geosciences and professor of planetary sciences at the University of Arizona. His research interests include geomor- phology, flood geomorphology, paleohydrology, Quaternary geology, natural hazards, geology of Mars and Venus, and philosophy of earth and planetary sciences. He has spent time as a geophysicist for U.S. Geological Survey and as an urban geologist. He has served on various committees and panels of the National Research Council, including the Panel on Alluvial Fan Flooding, the Panel on Global Surficial Geo- fluxes, and the Panel on Scientific Responsibility and Conduct of Research. He formerly chaired the U.S. National Committee for the International Union for Quaternary Research ([NQUA) and served on the Global Change Cornrnittee Working Group on Solid Earth Processes. Dr. Baker was recently president of the Geological Society of America and president of the INQUA Commission on Global Continental 138

Appendix B 139 PaTeohydrology. He holds a B.S. from Rensselaer Polytechnic [nstitute (1967) and a Ph.D. from the University of Colorado (1971~. ANA P. BARROS is an associate professor of civil engineering at Harvard University. Until recently, she was on the faculty at the Pennsylvania State University. She received a diploma in civil engineering from the University of Porto (Portugal) in 1985, an M.S. in hydraulics/ocean engineering from the University of Porto in 198S, an M.S. in environmental science and engineering from Oregon Graduate Institute in 1990, and a Ph.D. in civil engineering from the University of Washington in 1993. Dr. Barros's research interests are environmental fluid mechanics, land-atmosphere interactions, macroscaTe hydrology, hydrometeorology of mountainous regions, hydrologic extremes (floods and droughts), climate variability, and remote sensing. MIC~L E. C~PANA is director of the Water Resources Program and professor of earth and planetary sciences at the University of New Mexico. His current interests are hydrologic system-aquatic ecosystem interactions, regional hydrogeology, environmental isotope hydrology, and the hydrology of arid and tropical regions. He teaches courses in water resources management, hydrogeology, subsurface fate and transport processes, environmental mechanics, and geological fluid mechanics. He was a Fulbright scholar to Belize in 1996. Dr. Campana received a B.S. in 1970 in geology from the College of William and Mary, an M.S. in hydrology in 1973, and a Ph.D.in hydrology in 1975 from the University of Arizona. BENEDYKT DZIEGIELEWSKI is an Associate Professor of Geography at Southern Illinois University at Carbondale, and Executive Director of the International Water Resources Association. His two main research areas are Water Demand Management (urban water conser- vation planning and evaluation, water demand forecasting, modeling of water use in urban sectors) and Urban Drought (drought planning and management, measurement of economic, social and environmental drought impacts). He is Editor-In-Chief of Water International, and is an Honorary Lifetime Member of the Water Conservation Committee of the American Water Works Association. He received his B.S. and M.S. in Environmental Engineering from WrocIaw Polytechnic University, Wrociaw, Poland, and his Ph.D. in Geography and Environmental Engineering from Southern Illinois University.

140 Appendix B KIMBERLY A. GRAY is an associate professor of environmental engineering in the Department of Civil Engineering at Northwestern University. She received her Ph.D. from Johns Hopkins in 1988, an M.S. from the University of Miami in 1983 in civil engineering, and her B.A. in 1978 in biology from Northwestern University. Dr. Gray teaches physicochemical processes, aquatic chemistry, environmental analytical chemistry, and drinking water treatment design. Her research entails experimental study of both engineered and natural processes. She studies the characteristics of natural organic matter in surface waters, wetlands, and treatment systems by pyrolysis-GC-MS. Other topics of her research include the use of semiconductors to photocatalyze the destruction of hazardous chemicals, the application of ionizing radiation to reductively dechlorinate pollutants in soil matrices, and the ecotoxicology of PCBs in periphytic biolayers. C. THOMAS HAAN is the regents professor and Sarkeys distinguished professor in the Department of Biosystems and Agricultural Engineering at Oklahoma State University. He received his Ph.D. in agricultural engineering from Iowa State University in 1967. Dr. Haan's research interests are hydrology, hydrologic and water quality modeling, stochastic hydrology, and risk analysis. He has served as a consultant to several national and international agencies. Dr. Haan is a member of the National Academy of Engineering. DAVID R. MAIDMENT is the Ashley H. Priddy Centennial Professor of Engineering, and Director of the Center for Research in Water Resources at the University of Texas at Austin. He is an acknowledged leader in the application of Geographic Information Systems to hydrologic modeling. His current research involves the application of GTS to flood plain mapping, water quality modeling, water resources assessment, hydrologic simulation, surface water-groundwater interaction, and global hydrology. He is the co-author of Applied Hydrology (McGraw-Hill, ~988) and the editor-in-chief of Handbook of Hydrology (McGraw-Hill, 1993~. From 1992 to 1995 he was Editor of the Journal of Hydrology, and he is currently an Associate Editor of that Journal and of the Journal of Hydrologic Engineering. He received his Bachelor's degree in Agricultural Engineering from the University of Canterbury, Christchurch, New Zealand, and his M.S. and Ph.D. degrees in Civil Engineering from the University of Illinois at Urbana- Champaign.

Appendix B 141 DAVID H. MOREAU is professor in the Departments of City and Regional Planning and Environmental Sciences and Engineering at the University of North Carolina, Chapel Hill. Chair of the Department of City and Regional Planning, Dr. Moreau received a B.Sc. (civil engi- neering, 1960) from Mississippi State University, an M.Sc. (civil engi- neering, ~ 963) from North Carolina State University, an M.Sc. (engineering, 1964) from Harvard University, and a Ph.D. (water resources, 1967) from Harvard University. Dr. Moreau has been a consultant to the United Nations Development Program, Water Manage- ment Models for Water Supply; New York City, review of water de- mand projections; and Water for Sanitation and Health Program (All:)), financing of water supply and waste disposal. KAREN L. PRESTEGAARD is Associate Professor of Geology at the University of Maryland. Her research interests include sediment transport and depositional processes in mountain gravel-bed streams; mechanisms of streamflow generation and their variations with watershed scale, geology, and land use; hydrologic behavior of frozen ground; hydrologic consequences of climate change; and hydrology of coastal and riparian wetlands. She was a member of the NRC/CGER/- BRWM Committee for Yucca Mountain Peer Review: Surface Charac- teristics, Preclosure Hydrology, and Erosion. She received her B.A. in geology from the University of Wisconsin-Madison, and her M.S. and Ph.D. in geology from the University of California, Berkeley. STUART S. SCHWARTZ is a private consultant specializing in water resource systems analysis. He received his B.S. and M.S. in biology-geology from the University of Rochester, and Ph.D. in systems analysis from the Johns Hopkins University. Dr. Schwartz was director of the Section for Cooperative Water Supply Operations on the Potomac (CO-OP) at the Interstate Commission on the Potomac River Basin. His research and professional interests focus on the application of systems analysis and multiobjective optimization in risk-based water resource management. DONALD I. SIEGEL is a Professor of Geology at Syracuse University where he teaches graduate courses in hydrogeology and aqueous geochemistry. He holds B.S. and M.S. degrees in geology from the University of Rhode Island and Penn State University, respectively,

142 Appendix B and a Ph.D. in hydrogeology from the University of Minnesota. His research interests are in solute transport at both local and regional scales, wetland-ground water interaction, and paTeohydrogeology. He was a member of the NRC's Committee on Techniques for Assessing Ground Water Vulnerability and Committee on Wetlands Characterization. VERNON L. SNOEYINK is the Ivan Racheff Professor of En- vironmental Engineering at the University of Illinois. His primary areas of research are the physical and chemical processes for drinking water purification, in particular the removal of organic contaminants by activated carbon adsorption. In 1980, he co-authored the textbook Water Chemistry (Wiley and Sons). He has been a trustee of the American Water Works Association Research Foundation and president of the Association of Environmental Engineering Professors. He is now a member of the editorial advisory board of the Journal of the American Water Works Association and vice-chair of the Drinking Water Committee of the Environmental Protection Agency's Science Advisory Board. He was elected to the National Academy of Engineering in 1998. He has been a member of several NRC committees, and chaired the Committee on Small Water Supply Systems. He received his B.S. and M.S. degrees in civil engineering and his Ph.D. in water resources engineering from the University of Michigan. MARY W. STOERTZ is an assistant professor of hydrogeology at Ohio University, Department of Geological Sciences. Her area of specialty is stream restoration, particularly acid mine drainage polluted streams of Appalachia, as well as restoration of channelized rivers. She founded the Appalachian Watershed Research Group at Ohio University, which has the mission of restoring desired functions of watersheds subject to mining, sedimentation and flooding. She directs the miTtidisciplinary research arms of the Monday Creek Restoration Project and the Raccoon Creek Improvement Committee. Dr. Stoertz received her B.S. (geology) from the University of Washington, and her M.S. and Ph.D. (hydrogeology, minor in civil and environmental engineering) from the University of Wisconsin-Madison. KAY D. THOMPSON is assistant professor at Washington Univer- sity, Department of Civil Engineering. Her research is to investigate properties of subsurface materials for ground water studies, develop methods for subsurface characterization, assess the risks of hydrologic

Investigating Groundwater Systems on Regional and National Scales Get This Book
× 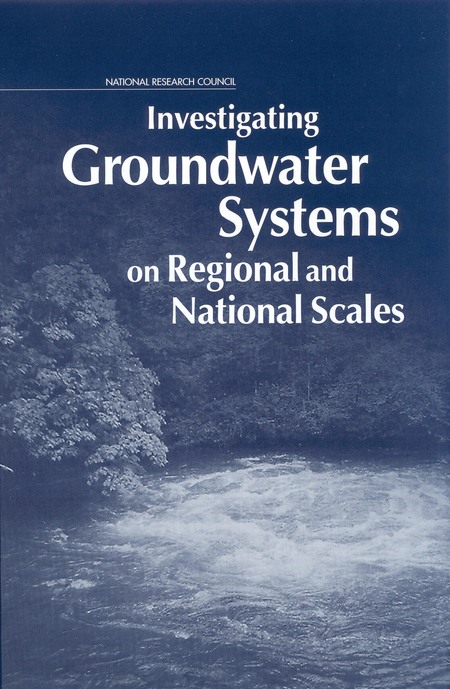 Groundwater is a basic resource for humans and natural ecosystems and is one of the nation's most important natural resources. Groundwater is pumped from wells to supply drinking water to about 130 million U.S. residents and is used in all 50 states. About 40 percent of the nation's public water supply and much of the water used for irrigation is provided by groundwater.

This report is a product of the Committee on USGS Water Resources Research, which provides consensus advice on scientific, research, and programmatic issues to the Water Resources Division (WRD) of the U.S. Geological Survey (USGS). The committee is one of the groups that work under the auspices of the Water Science and Technology Board of the National Research Council (NRC). The committee considers a variety of topics that are important scientifically and programmatically to the USGS and the nation, and it issues reports when appropriate.