The Quarantine and Certification of Martian Samples (2002)

Get This Book
Visit NAP.edu/10766 to get more information about this book, to buy it in print, or to download it as a free PDF.
« Previous: Executive Summary
Page 6 Share Cite
Suggested Citation:"1 Introduction." National Research Council. 2002. The Quarantine and Certification of Martian Samples. Washington, DC: The National Academies Press. doi: 10.17226/10138.
×

A basic goal of NASA’s Mars Exploration Program, begun in 1996, is to collect and return to Earth carefully chosen samples of Mars surface material. The interest in Mars and Mars sample return is driven in large part by the quest for evidence of life on that planet, either extant life or life in past ages, although sample return will also answer other important questions about the climatic, geologic, and geochemical history of Mars. Sample return is essential to the pursuit of these questions because sample research in terrestrial laboratories is a vastly more sensitive and informative scientific tool than remote analysis on the martian surface by even the most sophisticated robotic instruments.

The phrase “follow the water” describes a unifying theme that has been adopted for the present stage of Mars research, derived from the recognition that water is an essential ingredient of life on Earth and probably on Mars. It has long been known, from orbital photographs of river channels on the surface of Mars, that liquid water was once present on the martian surface, although it is not now (the vapor pressure of water in the martian atmosphere is far too low to permit the stable coexistence of liquid water).1-3 Most recently, the surprising discovery has been made of small gullies on Mars that appear to be very recent, eroded by a liquid that issued from remarkably shallow depths (e.g., Figure 1.1).4 When samples are collected on Mars for return to Earth, a high priority will be given to sampling materials from these previously aqueous environments to maximize the chances of the materials including relicts of martian life.5 These materials can be expected to include loose soil, rock fragments, and possibly rock cores, including cores of sedimentary rocks (Figure 1.2) containing information on a microscopic scale that can be accessed only in terrestrial laboratories.

The amount of solid sample material expected to be returned by a mission to Mars will be small, probably less than 500 g. The possibility that life exists, or has existed, on Mars greatly complicates the collection and study of samples because it dictates avoidance of the biological contamination of Mars and Earth by one another, and this 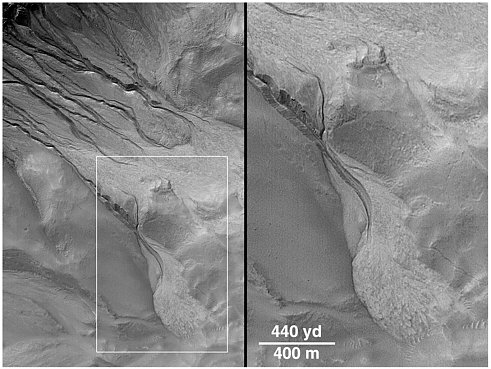 FIGURE 1.1 Drainage gullies and apron deposits on the north wall of a 12-km crater on Mars, apparently eroded by water that has seeped from the crater wall, as photographed by the Mars Orbiter Camera system on the Mars Global Surveyor spacecraft. The crater is near 37.4ºS latitude, 168.0ºW longitude. The sharpness of the channels and the absence of an overlay of small craters suggest that the drainage has been very recent. The right-hand image is an enlargement of the area outlined in the left-hand image. SOURCE: MGS MOC Release No. MOC2-241, June 22, 2000, courtesy of NASA/Jet Propulsion Laboratory/ Malin Space Science Systems.

is difficult to ensure. Mars must be protected from contamination by Earth organisms (forward contamination) to preserve its indigenous martian life forms, if there are any, for future study, and also because terrestrial contaminants accidentally brought back from Mars in the Mars samples would be detected in terrestrial laboratories and might be mistaken for Mars life. Earth must be protected against back contamination by hypothetical Mars organisms because of the possibility, acknowledged to be extremely remote,6,7 that if they exist, they might be harmful to terrestrial life or the terrestrial environment.

Avoidance of possible back contamination requires that the Mars samples be placed in a quarantine facility when they arrive on Earth, and that they not be released from this facility until it has been determined (certified) that they are intrinsically devoid of extraterrestrial life or have been made safe for distribution (e.g., by sterilization). It also dictates design of a return spacecraft and a mission profile that isolates the samples from the terrestrial environment from the time the spacecraft enters the atmosphere until the sample canister is opened in the quarantine facility. 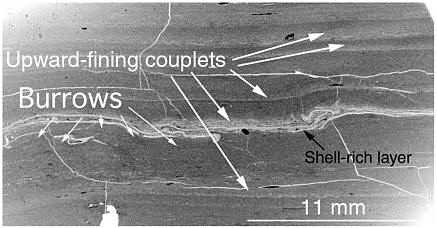 FIGURE 1.2 A thin section* of a terrestrial sedimentary rock, cut perpendicular to the plane in which sedimentation deposited layers of mud and silt. The rock is a sample of the Kildonnan Member Mudstone from the middle Jurassic period in Scotland. Each upward-fining couplet in the section records a particular episode on Earth—a storm—in which a batch of muddy water entered the volume where this rock originated and the mud settled, as coarser grains while the flow was fast and finer grains as it slowed. One depositional episode left a thin layer of shell fragments, and it can be seen that during quiescent periods bottom-dwelling organisms burrowed into the sediment surface. SOURCE: Photograph courtesy of J. Macquaker, Manchester University, United Kingdom.

*Thin sections are routinely prepared for the microscopic study of rocky material. The sections, ~30 µm thick and supported on glass slides, are made by a process of sawing, grinding, and polishing. At this thickness most minerals are relatively transparent, and the section can be illuminated by transmitted light (as the above section is).

2008, but failures of the Mars Climate Orbiter and Mars Polar Lander missions in 1999 dictated a reassessment of the Mars Exploration Program that inevitably will result in delaying the date for sample return to Earth until 2015 or later. This may seem to put sample return comfortably far in the future, from a planning perspective, but the present report concludes that the order of a decade of time will be needed to adequately plan and prepare a quarantine facility to receive the samples.

The nature of the required quarantine facility and of quarantine procedures has been considered by the National Research Council’s (NRC’s) Task Group on Issues in Sample Return8 and several other groups in the last 5 years.9,10 During 1999, the Committee on Planetary and Lunar Exploration (COMPLEX), a standing committee of the Space Studies Board of the NRC, carried out the present study focusing on the problems connected with quarantine of the Mars samples.

Although the NRC’s earlier study of Mars sample return dealt only briefly with the quarantine issue,11 it made a series of broad-based recommendations on the topic, several of which are reproduced in Box 1.1. COMPLEX endorses these recommendations, and the present study is built upon them.

Next: 2 Detection of Potential Biohazards »
The Quarantine and Certification of Martian Samples Get This Book
× 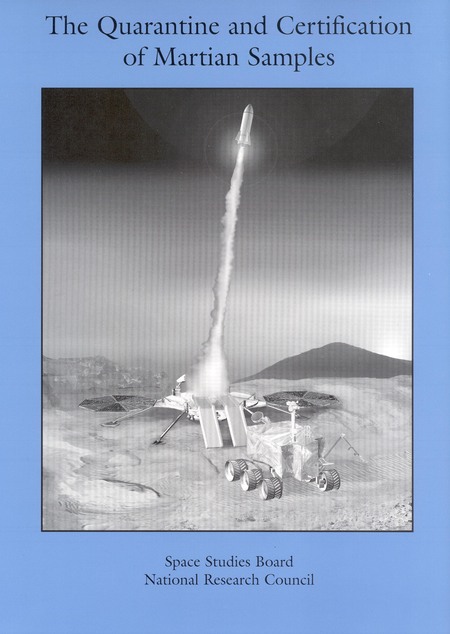 One of the highest-priority activities in the planetary sciences identified in published reports of the Space Studies Board's Committee on Planetary and Lunar Exploration (COMPLEX) and in reports of other advisory groups is the collection and return of extraterrestrial samples to Earth for study in terrestrial laboratories. In response to recommendations made in such studies, NASA has initiated a vigorous program that will, within the next decade, collect samples from a variety of solar system environments. In particular the Mars Exploration Program is expected to launch spacecraft that are designed to collect samples of martian soil, rocks, and atmosphere and return them to Earth, perhaps as early as 2015.

International treaty obligations mandate that NASA conduct such a program in a manner that avoids the cross-contamination of both Earth and Mars. The Space Studies Board's 1997 report Mars Sample Return: Issues and Recommendations examined many of the planetary-protection issues concerning the back contamination of Earth and concluded that, although the probability that martian samples will contain dangerous biota is small, it is not zero.1 Steps must be taken to protect Earth against the remote possibility of contamination by life forms that may have evolved on Mars. Similarly, the samples, collected at great expense, must be protected against contamination by terrestrial biota and other matter. Almost certainly, meeting these requirements will entail opening the sample-return container in an appropriate facility on Earth-presumably a BSL-4 laboratory-where testing, biosafety certification, and quarantine of the samples will be carried out before aliquots are released to the scientific community for study in existing laboratory facilities. The nature of the required quarantine facility, and the decisions required for disposition of samples once they are in it, were regarded as issues of sufficient importance and complexity to warrant a study by the Committee on Planetary and Lunar Exploration (COMPLEX) in isolation from other topics. (Previous studies have been much broader, including also consideration of the mission that collects samples on Mars and brings them to Earth, atmospheric entry, sample recovery, and transport to the quarantine facility.) The charge to COMPLEX stated that the central question to be addressed in this study is the following: What are the criteria that must be satisfied before martian samples can be released from a quarantine facility?