Visit NAP.edu/10766 to get more information about this book, to buy it in print, or to download it as a free PDF.
« Previous: Potassium
Page 380 Share Cite
Suggested Citation:"Selenium ." Institute of Medicine. 2006. Dietary Reference Intakes: The Essential Guide to Nutrient Requirements. Washington, DC: The National Academies Press. doi: 10.17226/11537.
×

DRIs: THE ESSENTIAL GUIDE TO NUTRIENT REQUIREMENTS 382 selenomethionine, which is not known to have a physiological function sepa- rate from that of methionine. The second reserve pool is the selenium found in liver glutathione peroxidase. Ingested selenite, selenate, and selenocysteine are all metabolized directly to selenide, the reduced form of selenium. Selenomethionine can also be me- tabolized to selenide. Selenide can be metabolized to a precursor of other reac- tions or be converted into an excretory metabolite. Selenium is excreted mainly through the urine. The breath may also contain volatile metabolites when large amounts of selenium are being excreted. DETERMINING DRIS Determining Requirements The adult requirements for selenium are based on the criterion of maximizing plasma glutathione peroxidase activity, as assessed by plateau concentration of plasma selenoproteins. Although some studies indicate a potential anticancer effect of selenium, the data were inadequate to set dietary selenium require- ments based on this potential effect. Further large-scale trials are necessary. Criteria for Determining Selenium Requirements, by Life Stage Group Life stage group Criterion 0 through 6 mo Human milk content 7 through 12 mo Human milk + solid food 1 through 18 y Extrapolation from adult 19 through 30 y Maximizing plasma glutathione peroxidase activity 31 through >70 y Extrapolation of plasma glutathione peroxidase activity from 19 through 30 y Pregnancy Â£ 18 y through 50 y Age-specific requirement + saturation of fetal selenoprotein Lactation Â£ 18 y through 50 y Age-specific requirement + human milk content requirement The UL The Tolerable Upper Intake Level (UL) is the highest level of daily nutrient intake that is likely to pose no risk of adverse effects for almost all people. Members of the general population should not routinely exceed the UL. The

PART III: SELENIUM 383 UL for selenium is based on selenosis as the adverse effect and represents total intake from food, water, and supplements. The most frequently reported fea- tures of selenosis (chronic toxicity) are hair and nail brittleness and loss and thus were selected as the critical endpoints on which to base a UL. The extensive food distribution systems in Canada and the U.S. ensure that individuals do not eat diets that originate solely from one locality. This moderates the selenium content of diets, even in high-selenium areas. The risk of selenium intake above the UL for U.S. and Canadian populations appears to be small, and there is no known seleniferous area in the United States and Canada with recognized cases of selenosis. DIETARY SOURCES Foods Dietary sources of selenium include meat, seafood, cereals and grains, dairy products, and fruits and vegetables. (Drinking water does not supply nutrition- ally significant amounts of selenium.) However, the selenium content of food can greatly vary depending on the selenium content of the soil where the animal was raised or where the plant was grown. Food animals in the United States and Canada usually have controlled diets to which selenium is added, and thus, the amounts found in muscle meats, milk, and eggs are more consistent than for plant-based foods. Dietary intake of selenium in the United States and Canada varies by geo- graphical origin, based on the selenium content of the soil and meat content of the diet. This variation is buffered by a large food-distribution system, in which the extensive transport of food throughout North America prevents decreased intakes in people living in low-selenium areas. Although the food distribution systems in the United States and Canada ensure a mix of plant- and animal- based foods originating from a broad range of soil selenium conditions, local foods (e.g., from farmersâ markets) may considerably vary from the mean val- ues in food composition databases. The content of selenium in plants depends on the availability of the ele- ment in the soil where the plant was grown. Unlike plants, animals require selenium, and so meat and seafood are reliable dietary sources of selenium. Therefore, the lowest selenium intakes are in populations that eat vegetarian diets comprising plants grown in low-selenium areas.

DRIs: THE ESSENTIAL GUIDE TO NUTRIENT REQUIREMENTS 384 Dietary Supplements Selenium is widely available in a variety of supplements and multivitamin prepa- rations. In the 1986 National Health Interview Survey (NHIS), 9 percent of all adults reported the use of supplements containing selenium. Bioavailability Most dietary selenium is highly bioavailable, although its bioavailability from fortified foods and supplements is lower than for naturally occurring dietary forms of selenium. Dietary Interactions This information was not provided at the time the DRI values for this nutrient were set. INADEQUATE INTAKE AND DEFICIENCY Selenium deficiency in otherwise well-nourished individuals is not likely to cause overt symptoms. However, selenium deficiency may lead to biochemical changes that can predispose a person to illness associated with other stresses, such as: â¢ Keshan disease, a cardiomyopathy found only in selenium-deficient children that appears to be triggered by an additional stress, possibly an infection or chemical exposure â¢ Kashin-Beck disease, an endemic disease of cartilage that occurs in preadolescence or adolescence, has been reported in some of the low- selenium areas of Asia, although the pathogenesis remains uncertain EXCESS INTAKE The limited data available on humans suggest that chronic toxicities from inor- ganic and organic forms of selenium have similar clinical features, but differ in the rapidity of onset and the relationship to tissue selenium concentrations. Inorganic selenium can cause toxicity at tissue levels of selenium that are much lower than those seen with similar intakes of dietary selenium as selenomethionine. The signs and symptoms of chronic selenosis, or selenium toxicity, are the following: â¢ Hair and nail brittleness and loss (most frequently reported symptoms) â¢ Gastrointestinal disturbances

PART III: SELENIUM 385 â¢ Skin rash â¢ Garlic breath odor â¢ Fatigue â¢ Irritability â¢ Nervous system abnormalities Special Considerations Soil variations: There are high-selenium regions in the United States, such as western South Dakota and eastern Wyoming, but the U.S. Department of Agri- culture has identified them and proscribed their use for raising animals for food. No evidence of selenosis has been found in these areas of high selenium content, even in the subjects consuming the most selenium. KEY POINTS FOR SELENIUM Selenium functions through selenoproteins, several of which 3 defend against oxidative stress and as such, plays a role as a dietary antioxidant. The requirements for selenium are based on the criterion of 3 maximizing plasma glutathione peroxidase activity. The UL is based on the critical endpoints of hair and nail brittleness and loss. Although some studies indicate a potential anticancer effect of 3 selenium, the data were inadequate to set dietary selenium requirements based on this potential effect. Food sources of selenium include meat, seafood, cereals and 3 grains, dairy products, and fruits and vegetables. The lowest selenium intakes are in populations that eat 3 vegetarian diets comprising plants grown in low-selenium geographic areas. The selenium content of foods can greatly vary depending on 3 the selenium content of the soil where the animal was raised or where the plant was grown. Selenium deficiency in otherwise well-nourished individuals is 3 not likely to cause overt symptoms. The limited data available on humans suggest that chronic 3 toxicities from inorganic and organic forms of selenium have similar clinical features but differ in rapidity of onset and relationship to tissue selenium concentrations.

Next: Sodium and Chloride »
Dietary Reference Intakes: The Essential Guide to Nutrient Requirements Get This Book
× 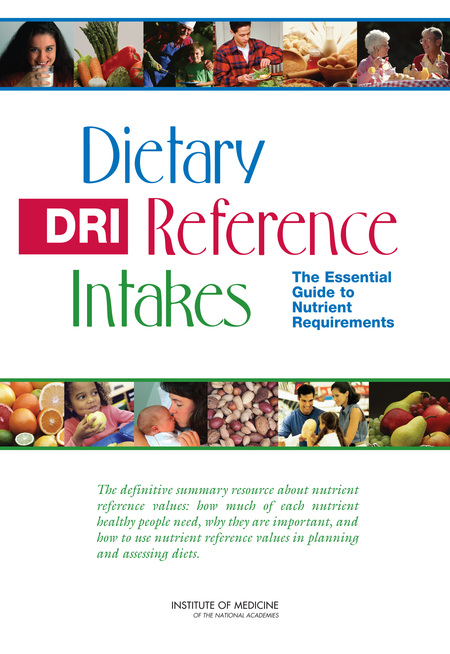 Widely regarded as the classic reference work for the nutrition, dietetic, and allied health professions since its introduction in 1943, Recommended Dietary Allowances has been the accepted source in nutrient allowances for healthy people. Responding to the expansion of scientific knowledge about the roles of nutrients in human health, the Food and Nutrition Board of the Institute of Medicine, in partnership with Health Canada, has updated what used to be known as Recommended Dietary Allowances (RDAs) and renamed their new approach to these guidelines Dietary Reference Intakes (DRIs).

Since 1998, the Institute of Medicine has issued eight exhaustive volumes of DRIs that offer quantitative estimates of nutrient intakes to be used for planning and assessing diets applicable to healthy individuals in the United States and Canada. Now, for the first time, all eight volumes are summarized in one easy-to-use reference volume, Dietary Reference Intakes: The Essential Reference for Dietary Planning and Assessment. Organized by nutrient for ready use, this popular reference volume reviews the function of each nutrient in the human body, food sources, usual dietary intakes, and effects of deficiencies and excessive intakes. For each nutrient of food component, information includes:

Dietitians, community nutritionists, nutrition educators, nutritionists working in government agencies, and nutrition students at the postsecondary level, as well as other health professionals, will find Dietary Reference Intakes: The Essential Reference for Dietary Planning and Assessment an invaluable resource.