Visit NAP.edu/10766 to get more information about this book, to buy it in print, or to download it as a free PDF.
Page i Share Cite
Suggested Citation:"Front Matter." National Research Council. 2008. English-Chinese, Chinese-English Nuclear Security Glossary. Washington, DC: The National Academies Press. doi: 10.17226/12186.
×

THE CHINESE PEOPLE'S ASSOCIATION FOR PEACE AND DISARMAMENT Founded in June 1985 by various concerned non-official organizations and prominent personages from all walks of life in China, the Chinese People's Association for Peace and Disarmament (CPAPD) is the largest nationwide non- governmental peace association with a total of 24 important member organizations. The objectives of the CPAPD are to promote mutual understanding, friendship and cooperation between the peoples of China and the rest of the world in joint efforts to maintain world peace, oppose arms races and war, achieve arms control and disarmament, strive for the complete prohibition and thorough destruction of nuclear weapons and other weapons of mass destruction, protect ecological environment and promote economic development and social progress. Having established a wide range of friendly contacts and ties abroad, the CPAPD undertakes cooperation and exchanges in various forms with more than 300 NGOs and research institutions in about 90 countries, which work for peace and conduct research in the fields of arms control, disarmament, global or regional security. While actively engaged in research on such issues as arms control, disarmament, peace and security, the CPAPD sponsors or co-sponsors various academic seminars annually, sends scholars and experts to attend international conferences or seminars, and hosts visiting delegations from abroad. The CPAPD has Consultative Status with the Economic and Social Council (ECOSOC) of the United Nations and is a member of the Conference of NGOs (CONGO) in Consultative Relationship with the United Nations.

ACKNOWLEDGMENTS The glossary committee members and staff have benefited greatly from the insights and observations of well-informed officials and scientific colleagues in the United States and China. The views that were obtained during these discussions were essential in providing a basis for the glossary. The committee expresses its gratitude for the time that these colleagues devoted to helping ensure that this glossary is as complete and accurate as possible. The glossary has also benefited from previous work by a number of organizations, both U.S. and Chinese. In particular, we would like to acknowledge the Nuclear Threat Initiative and the Monterey Institute on International Studies for allowing us to access work they did in 2002 on a nuclear terms dictionary. We also would like to acknowledge the Editing Committee of the National Defense Science and Technology Dictionary-Nuclear Energy Column, the Editing Committee of the Arms Control and Disarmament Handbook, and the Editing Committee of the Chinese Military Encyclopedia. Many terms and definitions in the glossary are quoted from their achievements. This glossary has been reviewed in draft form by individuals chosen for their diverse perspectives and technical expertise in accordance with procedures approved by the National Research Councilâs Report Review Committee and by the joint Review Committee organized by the Atomic Energy Press and the Chinese Peopleâs Association for Peace and Disarmament. The purpose of these independent reviews is to provide candid and critical comments that assist the institutions in making this published glossary as sound as possible and ensure that the glossary meets institutional standards for objectivity and accuracy. During the review, comments and the draft manuscript remained confidential to protect the integrity of the process. We wish to thank the following individuals for their review of this report: U.S. Reviewers Ping Lee National Security Technologies, LLC, Division Leader Stephanie Lieggi Monterey Institute of International Studies, Research Associate James Mulvenon Center for Intelligence Research and Analysis, Director, Defense Group Inc. Brad Roberts Institute for Defense Analysis, Research Staff Christopher Twomey Naval Postgraduate School, Assistant Professor and Associate Chair for Research Jing-dong Yuan Monterey Institute of International Studies, Director, East Asia Nonproliferation Program

PREFACE The Chinese Scientists Group on Arms Control (CSGAC) of the Chinese Peopleâs Association for Peace and Disarmament, and the Committee on International Security and Arms Control (CISAC) of the U.S. National Academy of Sciences have been meeting for almost 20 years to discuss nuclear arms control, nuclear nonproliferation, nuclear energy, and regional security issues, with the goal of reducing the possibility of nuclear weapons use and reducing nuclear proliferation in the world at large. Throughout these rich exchanges, our discussions have benefited from the contribution of bilingual participants and the services of interpreters. Despite long-standing personal relationships and strongly shared interests between CSGAC and CISAC, it was often evident that beyond the never-simple translation of one language into the other, there was also the difficulty of differing interpretations of terms. With substantial and growing international efforts in nonproliferation of nuclear weapons, counter-proliferation and the prevention of nuclear terrorism, and with the expansion of the use of nuclear power and the role of international inspections, it is important that participants whose respective native languages are Chinese and English agree on the meanings given to relevant terms in the two languages. In cases where they cannot agree, then it is important that they understand the usage in the other language, and be aware that a simple statement of the term may have alternative or ambiguous meanings. In April 2006, CISAC and CSGAC considered a joint project to produce an unclassified glossary of nuclear security terms, and concluded that this was feasible and would be valuable. Accordingly, participants on the two sides formed working groups and developed a framework for the glossary, and CSGAC prepared an initial set of terms. The working group members used e- mail intensively during this development phase, and also held joint meetings in Beijing in September 2006 and again in March 2007. Following several more rounds of e-mail consultations, the text was reviewed in China and the United States by experts from both countries whose comments and clarifications are reflected in the final manuscript. CISAC and CSGAC finalized the list of terms, definitions, and references at a November 2007 joint working group meeting. We believe that the product of this project, a joint CISAC and CSGAC glossary,

Preface x will be a valuable resource to the government, academic, and security community. This glossary of approximately 1000 terms is intended to reduce the likelihood of misunderstanding, and to remove barriers to progress in exchanges and diplomatic, cooperative, or other activities where unambiguous understanding is essential. For many of the terms, this is just a matter of translation because, in our review, we could readily agree on an appropriate translation of the term P volunteered by one side or the other. Consequently, there was little likelihood of misunderstanding, and so the majority of the terms in this glossary are simply paired with the corresponding term in the other language. Another category of terms required definition. It was clear that although there might be a single meaning in one language, there were several possible options that dealt with matters that were quite distinct in the other, For these terms, we have arrived at what we believe to be a common definition, which, in turn, we present in both languages. A third category of terms is one in which there are different meanings even within a single language. That is, the same set of words is used in different contexts to describe different objects, actions or concepts. For these terms, although we have in many cases agreed on a single translation of the term, we felt it necessary to provide varying interpretations that might be encountered for example, in military or diplomatic circles. Where possible, we have taken our definitions from reputable preexisting sources in authoritative texts or preexisting glossary compilations. We have given preference to international documents, then to official governmental documents, and then to organizations or references of some standing such as the National Academy of Sciences, the Arms Control and Disarmament Handbook ( å å¤ æ§ å¶ ä¸ è£ å æ å ), the National Defense Science and Technology Dictionary-Nuclear Energy ( å½ é² ç§ æ å è¯ å¤§ å¸ â¯â¯ æ ¸ è½ å· ), and similar sources. We have published the work as a book in the conventional Chinese- English and English-Chinese format. In addition, we have published the same source material on the Internet in a more âuser friendlyâ format at: http://www8.nationalacademies.org/webglossary and at: http://www.cpapd.org.cn/webglossary.

xi Preface Because terminology continues to evolve, we expect that an expanded version of the physical book may be produced at some future point. It is our intent to update the on-line version routinely, as the scope of interaction increases and clarifications come to light. We have arranged to do this in a transparent fashion; on-line one can see the changes and updates as well as the original version. The committees intend to formally review the list of terms approximately one year following publication and will make additions and corrections as needed at P that time. The committees welcome comments on the glossary at: cisac@nas.edu and at: css@iapcm.ac.cm Finally, we would like to especially thank Dr. Richard Garwin of CISAC and Academician Hu Side of CSGAC for providing invaluable guidance during all phases of this project. We are very proud to have had their participation as the U.S. and Chinese committee leaders and technical guides for the preparation of this glossary. Ming-Shih Lu Dongfeng Tian April, 2008

Next: Glossary Organization and Content »
English-Chinese, Chinese-English Nuclear Security Glossary Get This Book
× 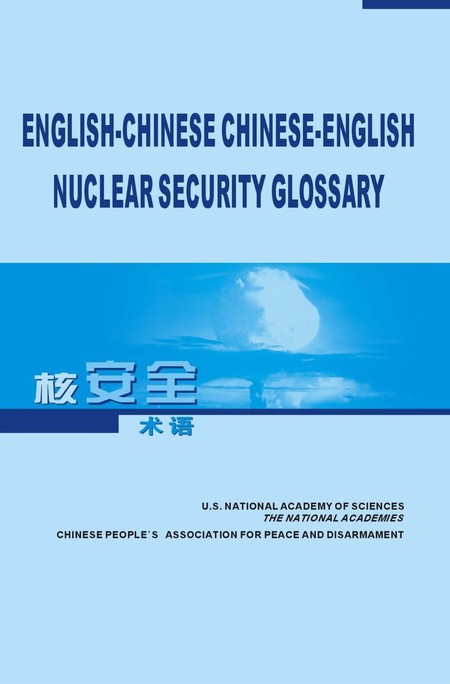 The U.S. National Academies Committee on International Security and Arms Control (CISAC) and the Chinese Scientists Group on Arms Control (CSGAC) of the Chinese People's Association for Peace and Disarmament have jointly produced a Chinese - English English - Chinese Nuclear Security Glossary. This glossary of approximately 1000 terms is built on 20 years of joint discussions on nuclear arms control, nuclear nonproliferation, nuclear energy, and regional security issues and is intended to remove barriers to progress in exchanges and diplomatic, cooperative, or other activities where unambiguous understanding is essential.