5 Cooperative Threat Reduction 2.0: Implementation Checklist The congressional request for this report expressed the Sense of Congress that the Department of Defense (DOD) Cooperative Threat Reduction (CTR) program should be strengthened and expanded and that part of this process should be the development of new initiatives. The committee believes that its vision of CTR 2.0 is achievable and is fully consistent with Congressâs view. This reportâs findings and recommendations identify actions that are necessary to begin the transition process toward CTR 2.0. The White House, working in concert with senior officials in the administration and Congress, should initiate the actions in the implementation checklist below: â¢ Establish who in the White House will lead the CTR 2.0 effort and solicit active support of senior officials in the relevant departments and agencies. â¢ Develop a clear strategy and country-region priorities, taking into account resources available across the government and through nongovern- ment and international partners. The strategy should include the following: o rapid response capability as well as the capacity to implement longer- term programmatic efforts o specific ways that CTR 2.0 can support both traditional arms control and nonproliferation treaties as well as new multilateral and international secu- rity instruments o involvement of a wide range of government, nongovernment, and international partners from the outset o consideration of other strategies for the same country or region, for example, from Unified Combatant Commands, the U.S. Agency for Interna- tional Development, and United Nations organizations 117

118 GLOBAL SECURITY ENGAGEMENT â¢ Work with the Office of Management and Budget to do the following: o Develop meaningful program metrics that Ã highlight program impact Ã acknowledge the value to national security of intangible program results Ã incorporate partner metrics into the overall evaluation of programs Ã link metrics to program selection criteria o Establish a multiyear budget planning basis for CTR 2.0 programs and develop a process for allocating budgets to the agencies needed to imple- ment programs â¢ Encourage a new generation of congressional leaders to engage actively through regular consultations between the executive and legislative branches and work with Congress to do the following: o add authorities to the departments whose participation is essential to CTR 2.0, but that are considered nonsecurity agencies o allocate funding for security programs directly to the agencies that will be responsible for implementation o provide the ability to all agencies implementing CTR 2.0 to comingle other funds with congressionally appropriated funds o provide ânotwithstanding authorityâ to up to 10 percent of the DOD CTR annual appropriation to ensure the capacity to respond rapidly and flex- ibly to opportunities â¢ Identify ways to make programs less cumbersome and bureaucratic, and more timely, agile, and responsive to partner priorities. o review the DOD CTR umbrella agreement and other U.S. govern- ment contracting mechanisms to assess what is required and where flexibility can be introduced o review current USG CTR programs to see which ones already imple- ment elements of CTR 2.0 and can be used as models â¢ Continue working with established partners and identify new partnersâ develop a âhabit of cooperation.â o demonstrate partnership by beginning new program engagements with information sharing, joint identification of risks and opportunities, col-

CTR 2.0: IMPLEMENTATION CHECKLIST 119 laborative planning, and shared responsibilities for project leadership, manage- ment, and resources o use the habit of cooperation as the basis for program transparency â¢ Promote sustainability by doing the following: o incorporating sustainability into the first stages of program development o engaging partners in program development, design, and implementation o seeking the input of local officials, scientists, and nongovernment organizations to ensure that programs are relevant and will sustain the interest and commitment of the local partners The legislative language also specifies eight elements listed below that new initiatives should include as they are developed and implemented. The commit- tee considered these elements, most of which are addressed specifically in this report and all of which apply broadly to CTR 2.0. This list provides a useful point of departure for any guidelines that the administration may prepare in the future and reflects important insights and lessons learned from the nearly two decades of program experience. These points are also listed in Appendix J along with the findings and recommendations relevant to them. 1. Programs should be well coordinated with the Department of Energy (DOE), the Department of State, and any other relevant U.S. government agency or department. 2. Programs will include appropriate transparency and accountability mechanisms, and legal frameworks and agreements between the United States and CTR partner countries. 3. Programs should reflect engagement with nongovernmental experts on possible new options for the CTR program. 4. Programs should include work with the Russian Federation and other countries to establish strong CTR partnerships. Among other things, these partnerships should (i) Increase the role of scientists and government officials of CTR part- ner countries in designing CTR programs and projects; and (ii) Increase financial contributions and additional commitments to CTR programs and projects from Russia and other partner countries, as appropriate, as evidence that the programs and projects reflect national priorities and will be sustainable.

120 GLOBAL SECURITY ENGAGEMENT 5. Programs should include broader international cooperation and part- nerships, and increased international contributions. 6. Programs should incorporate a strong focus on national programs and sustainability, which includes actions to address concerns raised and recom- mendations made by the Government Accountability Office, in its report of February 2007 titled âProgress Made in Improving Security at Russian Nuclear Sites, but the Long-Term Sustainability of U.S. Funded Security Upgrades is Uncertain,â which pertain to the Department of Defense. 7. Efforts should continue to focus on the development of CTR pro- grams and projects that secure nuclear weapons; secure and eliminate chemical and biological weapons and weapons-related materials; and eliminate nuclear, chemical, and biological weapons-related delivery vehicles and infrastructure at the source. 8. There should be efforts to develop new CTR programs and projects in Russia and the former Soviet Union, and in countries and regions outside the former Soviet Union, as appropriate and in the interest of U.S. national security. Developing a New Generation of Global Security Engagement Experts The committee was not asked to consider the issue of staffing, but believes that it is important to the overall discussion of future programs. The initial set of government officials, scientists, and engineers who created CTR 1.0 have mentored new staff over time, but the nature of CTR programs is highly technical, and in general, the academic specialties of science and security have been poorly integrated into program staffs. While the skills that went into cre- ating CTR 1.0 are highly valued, CTR 2.0 will demand some new capabilities. CTR 1.0 program models have been developed and tested, implementation approaches have succeeded and failed, best practices have been identified, and many lessons learned can save both time and resources in future engage- ments. At a minimum, consideration might be given to developing a course, perhaps organized jointly by the Departments of Defense, State, and Energy and other implementing departments and offered through the Department of State Foreign Service Institute or through the National War College or both. Specifically for DOD, layers of courses could be developed that would include command and staff colleges, service war colleges, and a National Defense University Capstone course. DOE could also incorporate specific training into its courses. One of the aims of such training experiences would be to bring This issue is also addressed by the Project on National Security Reform. See Project on National Security Reform. 2008. Forging a New Shield. Availabe as of March 2009 at http://www.pnsr. org/data/files/pnsr%20forging%20a%20new%20shield.pdf.

CTR 2.0: IMPLEMENTATION CHECKLIST 121 individuals together from across departments with the goal of team building and better understanding each otherâs missions, capabilities, and programs as participants in CTR 2.0. Team building can be further amplified by providing regular opportunities for staff to be detailed to other agenciesâ CTR programs. Providing training and interagency exchange opportunities that help define a career path may also help attract new talent to the CTR area. As it is, the policy offices at the Departments of Defense, State, and Health and Human Services and other agencies are staffed by dedicated professionals, but there are too few professionals to do the job that is required under CTR 2.0.

Next: List of Acronyms »
Global Security Engagement: A New Model for Cooperative Threat Reduction Get This Book
× 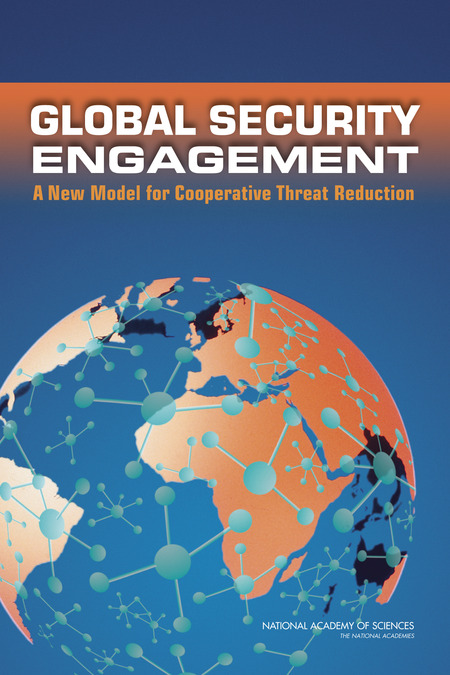 The government's first Cooperative Threat Reduction (CTR) programs were created in 1991 to eliminate the former Soviet Union's nuclear, chemical, and other weapons and prevent their proliferation. The programs have accomplished a great deal: deactivating thousands of nuclear warheads, neutralizing chemical weapons, converting weapons facilities for peaceful use, and redirecting the work of former weapons scientists and engineers, among other efforts. Originally designed to deal with immediate post-Cold War challenges, the programs must be expanded to other regions and fundamentally redesigned as an active tool of foreign policy that can address contemporary threats from groups that are that are agile, networked, and adaptable. As requested by Congress, Global Security Engagement proposes how this goal can best be achieved.

To meet the magnitude of new security challenges, particularly at the nexus of weapons of mass destruction and terrorism, Global Security Engagement recommends a new, more flexible, and responsive model that will draw on a broader range of partners than current programs have. The White House, working across the Executive Branch and with Congress, must lead this effort.