Get This Book
Visit NAP.edu/10766 to get more information about this book, to buy it in print, or to download it as a free PDF.
« Previous: Appendix F: Acronyms and Abbreviations
Page 226 Share Cite
Suggested Citation:"Appendix G: Glossary." National Research Council. 2010. Spectrum Management for Science in the 21st Century. Washington, DC: The National Academies Press. doi: 10.17226/12800.
×

altimetry: The measurement of altitude, possibly by using radar.

anomaly correlation: A common measure of forecast accuracy, with values above 0.6 generally considered to be significant.

antenna main beam: The part of an antenna’s radiation pattern (transmit and receive properties) that contains the maximum power and field strength. Synonymous with “beam lobe.”

antenna sidelobe: The part of an antenna’s radiation pattern (transmit and receive properties) that is not part of the main beam.

array: An interferometric observational scheme that employs multiple linked antennas or dishes to mimic the capabilities of a much larger, single dish.

cross-frequency mitigation: The process of measuring a particular band by splitting it into sub-bands (spectral analysis) and then looking “across the frequencies” for outlier channels. These outliers are presumed to be contaminated with RFI because they have more power in them than would be expected.

direct data assimilation (DDA): A powerful technique developed during the past two decades. DDA optimally uses all available data from satellites, balloons, radars, and surface stations to steer numerical weather prediction (NWP) models. DDA applied to satellite data is known as direct radiance assimilation (DRA) and accounts for most of the improvements in the performance of NWP models in the Southern Hemisphere where other sensors are scarce.

downwelling: Natural radiation that radiates down from the sky.

Environmental Data Record (EDR): Characteristic information regarding an environment that has been observed: once an Earth remote sensing observatory collects incident radiation and it is sent to researchers for processing, the researchers organize the data and interpret them to produce EDRs. EDRs include sea and land wind speed, sea and air temperature, precipitation, sea salinity, and soil moisture. See Table 2.1 in Chapter 2 for a complete list.

Gaussian: A frequency distribution of a variable that exhibits normality and is useful for identifying noise in an instrument.

interference: The effect of unwanted energy due to one or a combination of emission(s), radiation(s), or induction(s) on reception in a radiocommunications system, manifested by any performance degradation, misinterpretation, or loss of information that could be extracted in the absence of such unwanted energy.

interferometry: An observational technique that achieves a large angular resolution by combining the collected radiation from numerous dispersed, linked dishes and examines the resulting interference pattern. The use of interferometry, for which multiple smaller dishes are built, can be more cost-effective than building one enormous dish.

nowcasting: The practice of forecasting the next 6 hours of weather using observational data. Nowcasting is more precise than forecasting because it has better information on small-scale weather structures.

numerical weather prediction (NWP) models: Computer simulations that forecast future conditions based on information on current weather conditions. A significant limitation of any forecasting model is the reliability and availability of data input.

out-of-band emission: A type of emission that causes interference on a frequency or frequencies immediately outside the necessary bandwidth and that results from the modulation process, but excluding spurious emissions.

Part 15 device: A device that is regulated by Section 15 of Title 47 of the Code of Federal Regulations and therefore is not subject to licensing before radiating on an intentional or unintentional basis.

passband/bandpass: The range of frequencies that can pass through a filter.

passive radio/microwave observations: Observations of the natural radio or microwave environment that are made on a receive-only basis—that is, there are no transmissions involved.

polarimetry: The measurement of the polarization of incident radiation that has been reflected and thus provides information on the object off of which the radiation was reflected.

quantum transition: The change of an atom or molecule from one quantum state to another.

radio and microwave bands of relevance:

radiometry: The study of the measurement of electromagnetic radiation.

radio science: Any scientific endeavor that employs the use of radio or microwave radiation to explore the fundamental characteristics of natural phenomena.

scatterometry: The measurement of a normalized radar cross section of pulses reflected off a surface. This technique has been particularly useful for the measurement of ocean surface winds.

spectral efficiency: The degree to which a given portion of the spectrum is actually used, compared with the maximum theoretical possible use of that portion.

spectral occupancy: The fraction of time that a transmission can be detected at a given frequency, for a given sensitivity and a given time-frequency resolution.

spectrometer: An instrument that analyzes incident radiation to allow the measurement of individual spectral lines that are characteristic of specific atoms or molecules.

spectroscopy: A technique that analyzes incident radiation to allow the measurement of individual spectral lines that are characteristic of specific atoms or molecules.

spurious emission: Emission that causes interference on a frequency or frequencies that are outside the necessary bandwidth and the level of which may be reduced without affecting the corresponding transmission of information. Spurious emissions include harmonic emissions, parasitic emissions, intermodulation products, and frequency conversion products but exclude out-of-band emissions.

sub-band: A smaller piece of a specified band.

synthetic aperture: A technique that uses the combined collecting area of numerous dispersed dishes to mimic the capabilities of a much larger, single dish.

type-approved device: An emitting device that is approved by the Federal Communications Commission by its type under the Code of Federal Regulations.

upwelling: Natural radiation that radiates up from Earth.

Spectrum Management for Science in the 21st Century Get This Book
× 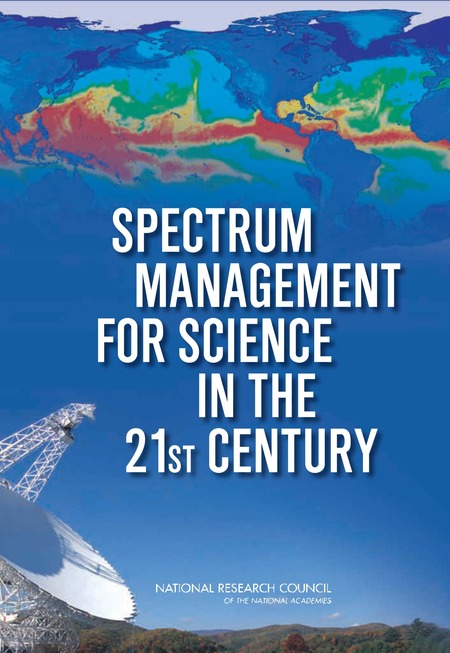