The Subjective Well-Being Module of the American Time Use Survey: Assessment for Its Continuation (2012)

Get This Book
Visit NAP.edu/10766 to get more information about this book, to buy it in print, or to download it as a free PDF.
« Previous: 1. Background and Overview
Page 9 Share Cite
Suggested Citation:"2. Ongoing and Potential Research Applications." National Research Council. 2012. The Subjective Well-Being Module of the American Time Use Survey: Assessment for Its Continuation. Washington, DC: The National Academies Press. doi: 10.17226/13535.
×

Compelling evidence indicates that higher levels of subjective or self-reported well-being are associated with a range of desirable outcomes, from better health and greater longevity to stable social relationships and even to economic productivity. Daily stress, for example, has been shown to correlate quite strongly with illness, and higher levels of hedonic well-being (positive feelings) with lower incidence of cardiovascular disease (Boeham and Kubzansky, 2012; Huppert, 2009). Based on the current evidence, generated from research using a variety of methods, one could even reasonably conclude that SWB is likely a causal factor for some health outcomes. This in itself is a compelling reason to gather data on and analyze the subjective-wellbeing of the population.

Though data from the 2010 ATUS SWB module have only been publicly available since November 2011 (2012 data will not be available until next year), research using those data is already emerging. This section identifies some of that work to provide a sense of the range of applications.

2.1. Time Use, Emotional Well-Being, and Unemployment

In an analysis of the differences in time use and emotional well-being between employed and unemployed people—for specific activities identified using the ATUS sample—Kreuger and Mueller (2012) show that the unemployed get less enjoyment out of leisure and report higher levels of sadness during specific activities relative to employed (the sadness decreases abruptly at the time of employment).8 This study leans more heavily on data from the Survey of Unemployed Workers in New Jersey since its longitudinal structure, in contrast to the repeated cross-sectional measurement in ATUS, allows consideration of fixed effects—that is, to look at within group variation—but is indicative of the importance of being able to link data on subjective well-being to specific events.

Vicki Freedman, Richard Gonzalez, Lindsay Ryan, Norbert Schwarz, Jacqui Smith, and Robert Stawski, are comparing DRM—which involves asking respondents to reconstruct and describe episodes of the previous day and the feelings they experienced during each—with shorter survey approaches that retain a subset of DRM features.9 This work is comparing findings from the Health and Retirement Study (HRS) with DRM data collected in the Panel Study of Income Dynamics (PSID), the ATUS SWB module, and the American Life Panel.10

8More generally, the ATUS SWB module has the potential to add richness to research on trends in leisure and leisure inequality (see, e.g., Aguiar and Hurst, 2007) and on the link between leisure and well-being (see, Meyer and Sullivan, 2009, which examines changes in the distribution of well-being as a function of not just consumption of goods and services, but also consumption of time, by incorporating information based on self-reported measures.

9A brief description of this research in progress can be found at http://micda.psc.isr.umich.edu/project/detail/35382 (accessed July 17, 2012).

The minimum features necessary for a short, reliable, and valid survey index of experienced well-being are unknown, though the target length of a survey measure being tested in their study is 3–5 minutes.

This kind of evaluation is central to determining how broadly subjective measures can potentially be integrated into policy analyses and national statistics. Adding a standardized – employment, etc.) is necessary for understanding covariates of (and developing statistics on) population well-being. However, such an integrated strategy will only be feasible if the modules are minimally burdensome and retain validity across contexts and if the short-version questionnaires are sufficiently robust in the information they produce.

Two additional sets of analyses that use ATUS or ATUS-like data are worth noting because they provide an indication of potential uses of data from the SWB module. In a recent study, Krueger and Stone (2008) measured pain during specific random periods of time, which allowed them to study how reported (recalled) levels of pain affected activities of daily living in particular segments of the sample population. This approach is novel relative to the global assessment methodologies typically used in population studies. The authors used data from the Princeton Affect and Time Survey (PATS), which employs a similar data collection methodology and the same general procedures as ATUS: “yesterday” is reconstructed through computer-assisted telephone interviews, and then three episodes from those identified are randomly drawn and information is collected about affect and pain.

Similar studies could be done even more robustly using ATUS, as PATS allowed only 3,982 respondents, while there were more than 12,000 in the 2010 ATUS sample. In addition, the PATS sample was likely less representative than the ATUS sample. Even with these limitations in PATS (relative to ATUS), the finding from this study were clear and robust: one was that those with lower income or less education reported higher average pain than did those with higher income or more education, and another was that average pain ratings reached a plateau between the ages of about 45 years and 75 years. The results of this study suggest even greater potential for the value of ATUS for pain studies—an area where there is an increasing demand for research.

Stone and Deaton have recently begun work, using the 2010 SWB module data, to examine the hypothesis that people with different employment status (working/nonworking) and occupations (using standard labor categories) experience different levels of pain throughout the day—and not just on the job.11 Possible explanations for variation in reported pain levels include the differing physical demands of different occupations; these pain-occupation relationships may vary by age or gender. The researchers first examined pain, rated on a scale from 0 (did not feel any pain) to 6 (severe pain), for a broad employment status variable. They found those who were employed had less pain than those who were unemployed and were looking for work or who

experienced well-being such as the U-index, which measures the proportion of time individuals spend in an “unpleasant,” “undesirable,” or “unhappy” state (see Krueger and Stone, 2008). A focus on the U-index would be justified if policy makers want to pay attention to the incidence of negative feelings and their health and other consequences.

11This work is being done by Arthur Stone (Stony Brook University) and Angus Deaton (Princeton University).

were retired or disabled. People in management, business, and financial occupations had lower pain levels than almost all of the other occupational categories (controlling for age and sex). People in occupations that are judged as having higher levels of manual labor also reported more daily pain. Pain was also higher on average during times respondents reported being at work in comparison with other activities. Other aspects of hedonic well-being—e.g., specific emotions, such as stress or enjoyment—may ultimately be examined in much the same way.

Similarly, it is possible to test if pain was higher at work or during periods not at work, and whether or not this distinction interacted with type of occupation: Do those with physically demanding jobs experience more pain on the job than when not working? Is this pattern less pronounced for less physically demanding occupations? These analyses have begun to reveal the capability of the detailed, daily data of the ATUS to address both between- and within-subjects questions, and highlight the richness of the data.

Various well-being measures have been used for some time to supplement measures of objective health in clinical and epidemiological research, particularly by those interested in broadening the concept of health beyond the absence of illness to include the presence of positive health, functioning, and other quality-of-life dimensions.

Policies oriented toward improving care for the chronically ill or for end-of-life care, for example, could benefit from better data on the impact that various treatments have on patients and on their families and careers. Data on subjective well-being could be useful in this area, especially for monitoring those who are providing care, such as family members. The data could identify where targeted studies are needed, such as when quality is at least as important as quantity of life. The distinction between hedonic well-being and other dimensions of well-being addressed in the 2012 SWB module may be especially important for the end of life, when the balance between predominantly purposeful and pleasurable activities might change.

In addition, the well-being of eldercare providers is of interest to policy makers because the elderly population is growing, along with a reliance on informal care providers to assist them. Researchers may be able to take advantage of a change that was made to the ATUS in 2011, when questions that identify eldercare providers and eldercare activities were added.

Transportation has been identified as a potentially key determinant in the quality of people’s lives. For example, when the transportation infrastructure is of poor quality or overcrowded, congestion and unreliable travel times inhibit the ability of individuals to engage in enjoyable or productive activities. Therefore, modeling the relationship between travel behavior and activities with measures of well-being represents a potential policy application of time use and well-being data (Diener, 2006; Steg and Gifford, 2005). Archer et al. (2012, p. 1) describe how transportation forecasting models may be used to help inform policy and investment decisions; they use the 2010 ATUS and SWB module data to develop a multivariate model designed to “capture the influence of activity-travel characteristics on subjective well-being while accounting for unobserved individual traits and attitudes that predispose people when it comes to their emotional feelings.” They find that “activity duration, activity start time, and child accompaniment significantly impact feelings of well-being for different activities” (including

travel). The authors add that “by integrating the well-being model presented in this paper with activity-based microsimulation models of travel demand, measures of well-being for different demographic segments may be estimated and the impacts of alternative policy and investment decisions on quality of life can be better assessed.”

Next: 3. Assessment »
The Subjective Well-Being Module of the American Time Use Survey: Assessment for Its Continuation Get This Book
× 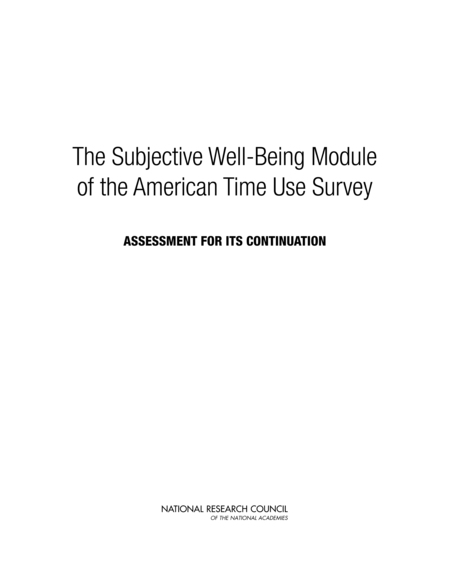 The American Time Use Survey (ATUS), conducted by the Bureau of Labor Statistics, included a subjective well-being (SWB) module in 2010 and 2012. The module, funded by the National Institute on Aging (NIA), is being considered for inclusion in the ATUS for 2013. The National Research Council was asked to evaluate measures of self-reported well-being and offer guidance about their adoption in official government surveys. The charge for the study included an interim report to consider the usefulness of the ATUS SWB module, specifically the value of continuing it for at least one more wave. Among the key points raised in this report are the value, methodological benefits, and cost and effects on the ATUS and new opportunities.

Research on subjective or self-reported well-being has been ongoing for several decades, with the past few years seeing an increased interest by some countries in using SWB measures to evaluate government policies and provide a broader assessment of the health of a society than is provided by such standard economic measures as gross domestic product. NIA asked the panel to prepare an interim report on the usefulness of the SWB module of the ATUS, with a view as to the utility of continuing the module in 2013.

The Subjective Well-Being Module of the American Time Use Survey is intended to fulfill only one narrow aspect of the panel's broader task. It provides an overview of the ATUS and the SWB module, a brief discussion of research applications to date, and a preliminary assessment of the value of SWB module data. The panel's final report will address issues of whether research has advanced to the point that SWB measures-and which kinds of measures-should be regularly included in major surveys of official statistical agencies to help inform government economic and social policies.