Biologic Markers of Air-Pollution Stress and Damage in Forests (1989)

Visit NAP.edu/10766 to get more information about this book, to buy it in print, or to download it as a free PDF.
Page i Share Cite
Suggested Citation:"Front Matter." National Research Council. 1989. Biologic Markers of Air-Pollution Stress and Damage in Forests. Washington, DC: The National Academies Press. doi: 10.17226/1414.
×

Preface There is not much question about the sensitivity of plants to air pollution, nor is there doubt that air pollution is affecting forests and agriculture in Europe, North America, Brazil, and elsewhere. The effects on forests are well known--they follow patterns of impoverishment long recognized as the result of chronic disturbance. Depending on the severity of the disturbance, the results are reduced growth of plants, morbidity of trees, shifts in species, and ultimately, replacement of forests by shrubland, grassland, or barren land that supports little or no vegetation. including agriculture. Once the process starts, it lost from Once the process plants and soils; nutrient ratios and, as the vegetation changes, seed sources are lost as well. _ _ _ 7 C~ can be difficult to reverse. Nutrients are change; the character of the soils changes; Experience is rich, and the causes of damage are known; and so are the cures. But the cures seem expensive; they require specific action aimed at specific pollutants. The costs of cures are well focused and great, while the damage is diffuse and its increments seem small. The familiar cry is for better resolution of the relationships between cause and effect before investing in a cure that might be only marginally effective. Meanwhile, the damage accumulates and forests move inexorably down the scale of impoverishment. The difficulties in addressing the effects of air pollution are made worse by the fact that effects of many types of disturbances are similar and that the responses of plants are responses to general stress and are not easily used to diagnose specific insults. Stress has many causes and collateral effects; such as diseases and pests that become important when plants are otherwise weakened. Sorting out cause and effect has frustrated pathologists and ecologists for years. In a new effort to address this classical challenge that touches sensitive economic interests and equally sensitive nerves among scientists, the - ~ Protection Agency sought help from the National Research Council to recent progress in science might be opening new doors that would lead diagnoses and narrow the issues. The Committee on Biologic Markers Damage in Trees borrowed from experience in diagnosing specific criteria to diagnosis the effects of air pollution Environmental review whether to more specific of Air-Pollutant human disease to search for A on trees and forests. The committee sought the aid of a group of distinguished scholars selected for their recent technical contributions to this difficult topic. This group met with the committee in · . V11

Little Switzerland, North Carolina, to explore the potential of new approaches. This book is their answer: progress lags the need, but progress is accumulating. There will be, however, no simple diagnosis. Diagnosis will be a "most probable cause" derived from many lines of evidence, each gathered over time and used with other evidence as the basis of analysis. The potential for progress, however, is real, as shown in this book. It depends on intensified research, but as in medicine, refinements are available now, and others clearly are possible. The completion of this report required not only the tireless efforts of the committee, but also the patience and persistence of a diverse group of other scholars who contributed to the symposium, prepared papers for the report, and responded to the flow of questions that emerged as the report progressed. Dr. David Policansky and Dr. Robert Smythe of the NRC staff had the awkward duty of reconciling often opposing views of earnest scholars unaccustomed to compromise with an equally adamant chairman. They carried the burden masterfully and graciously, aided throughout by the skill of Norman Grossblatt, editor for the Commission on Life Sciences. To all I offer thanks. George M. Woodwell, Chairman Committee on Biologic Markers of Air-Pollution Damage in Forests · · ~ vail

Part i: The Committee's Report

Next: Executive Summary »
Biologic Markers of Air-Pollution Stress and Damage in Forests Get This Book
× 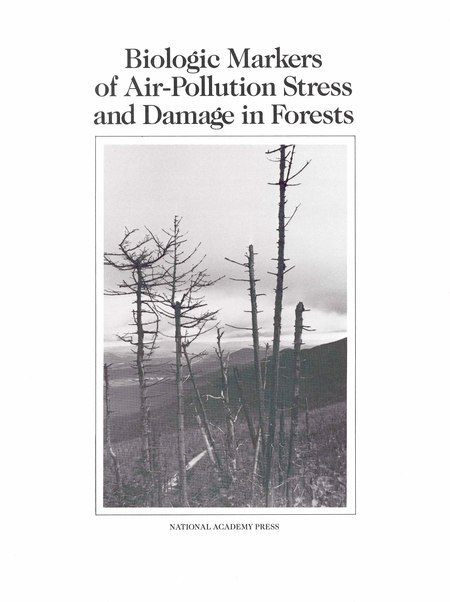 There is not much question that plants are sensitive to air pollution, nor is there doubt that air pollution is affecting forests and agriculture worldwide. In this book, specific criteria and evaluated approaches to diagnose the effects of air pollution on trees and forests are examined.