Get This Book
Visit NAP.edu/10766 to get more information about this book, to buy it in print, or to download it as a free PDF.
Page i Share Cite
Suggested Citation:"Front Matter." National Academy of Sciences and National Research Council. 1991. Headline News, Science Views. Washington, DC: The National Academies Press. doi: 10.17226/1575.
×

The Institute of Medicine was established in 1970 by the National Academy of Sciences to secure the services of eminent members of appropriate professions in the examination of policy matters pertaining to the health of the public. The Institute acts under the responsibility given to the National Academy of Sciences by its congressional charter to be an adviser to the federal government and, upon its own initiative, to identify issues of medical care, research, and education. Dr. Samuel O. Thier is president of the Institute of Medicine

No part of this book may be reproduced by any mechanical, photographic, or electronic process, or in the form of a phonographic recording, nor may it be stored in a retrieval system, transmitted, or otherwise copied for public or private use, without written permission from the publisher, except for the purposes of official use by the U.S. government.

All of the articles and author affiliations in this book appear as originally published.

We live in an era of unprecedented scientific and technical achievement. Our lives have been transformed by computers, medical breakthroughs, space probes and a host of other changes—as well as by such dangers as environmental degradation and nuclear conflict. My own field of geophysics, in which we have learned how the continents move across the globe on tectonic plates, illustrates the fantastic progress that has occurred in a wide range of scientific disciplines.

Yet, despite their importance, the many developments in science and technology remain mysterious to millions of Americans. People have little understanding of semiconductors, genetic engineering, global warming and other issues that are changing their lives. Opinion surveys and tests of U.S. students' knowledge show that public understanding of science and technology is weak. Even Americans with advanced training in non-scientific fields often know little about the revolution in biology or the amazing new materials being produced in laboratories. As science journalist Ben Patrusky writes in this book, "When it comes to science, many smart, achieving, curious and otherwise accomplished folk come down with a case of synaptic shutoff. Here we are living in what is truly an astonishing era in human history, a dazzling epoch of scientific and technological achievement—mere prelude to marvels yet undreamed of—and many of

its beneficiaries are indifferent to, if not altogether bored by, the very enterprise that brought us to this most exalted station.''

This popular indifference poses a challenge to a democratic society facing important decisions about AIDS, drugs, national defense, medical technology and other issues involving science and technology. How can voters and policymakers act wisely about issues they do not understand? Our economy requires excellence in science and technology, from the factory floor to research in such cutting-edge fields as optics, biotechnology and microelectronics. International competition in both basic research and technology is increasing steadily, and people's jobs and prosperity are certain to be affected by how well our nation fares. Americans also will encounter many questions involving science and technology in their daily lives, from evaluating the risks posed by radon or pesticide residues to deciding whether to purchase safety devices for their automobiles, what to eat and how to preserve the environment. In the world of the 1990s and beyond, knowledge about science and technology is not a frill but a necessity.

The path that separates scientists from non-scientists runs both ways. Many scientists, engineers and other technical experts make an inadequate effort to explain their work and concerns to their fellow citizens. Even if their specialty bears directly on important issues of the day, these experts may be reluctant to venture beyond their classroom or laboratory to speak with public officials, journalists or even at a neighborhood gathering. Many of them, trained in the rational ways of the scientific method, find the larger world maddeningly illogical and imprecise. Yet this is precisely why more of them need to roll up the sleeves of their lab coats and share their special expertise with the larger society. Former New Jersey Governor Thomas Kean, writing in this volume, is correct in arguing that, ''In these days of complex problems and high-tech solutions, it is essential that those who understand the laws of nature be more involved in the making of the laws of man."

Headline News, Science Views seeks to bridge this gap between science and the rest of society. It features 75 brief

essays by some of our country's most prominent scientists, engineers, physicians and other experts. The authors discuss terrorism, space travel, rising sea level, sustainable agriculture and other issues in language that is remarkably free of jargon. They outline issues in a way that makes science and technology interesting even for people who struggled to pass high school chemistry. All of the articles originally were syndicated nationally by the National Academy Op-Ed Service. The volume was edited by David Jarmul, who has directed the service since its inception in 1983. We hope Headline News, Science Views will help bring the worlds of scientists and non-scientists a little closer. Neither group is well-served if, like the continents, they continue to drift apart.

The articles in this book originally appeared on the editorial and opinion pages of daily newspapers. They were distributed by the National Academy Op-Ed Service. Begun in 1983 under the auspices of the National Academy of Sciences, National Academy of Engineering, Institute of Medicine and National Research Council—the institutions whose reports serve as the basis for many of the articles—the service provides more than 250 newspapers with timely articles by scientific and technical experts. The papers receive the weekly articles free with exclusive rights within their cities. Among those that have published stories from the service are The Atlanta Constitution, The Boston Globe, The Chicago Tribune, The Cleveland Plain Dealer, The Detroit News, The Houston Chronicle, The Miami Herald, Newsday, The Philadelphia Inquirer, The San Francisco Chronicle and The St. Louis Post-Dispatch .

The wonderful cartoons and drawings in this volume were published originally by editors at subscribing newspapers. The artists and editors granted us permission to reprint the illustrations here.

The service would not exist without the continued support and encouragement of the editors at the subscribing newspapers, who have helped us bring these complex scientific and technical issues into the arena of public debate.

We also are indebted to hundreds of study committee members, staff officers and others within the Academy who have shared their expertise and offered advice on story ideas. The entire staff of the Academy news office supports the Op-Ed Service in many ways, from reading drafts to gathering clips; Gail Porter, former director of the office, and Patricia Worns, the copy editor, contributed to every article in this volume.

Our greatest thanks is reserved for the authors, who took time out from busy schedules to prepare these articles without pay and under tight deadlines. Making the transition from scientific text to newspaper prose was not always easy, but it was made much smoother by authors whose prominence was matched by their patience, eloquence and genuine desire to reach out beyond the scientific community to the American public.

Next: 1 Science and Non-Scientists »
Headline News, Science Views Get This Book
× 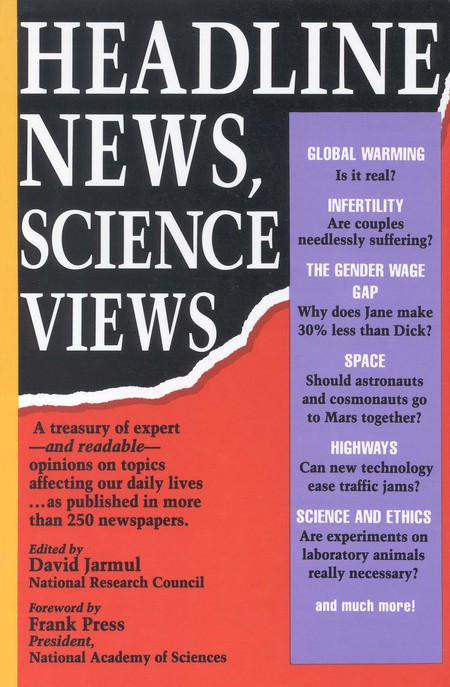 Many Americans want information on how to eat a healthier diet, clean up the environment, or improve their children's education. Yet, all too often, people lack the time or background to read scientific reports for answers to these questions.

Now, scientists and nonscientists alike will enjoy Headline News, Science Views, a collection of easy-to-read short articles on many of today's most important issues.

These readable essays are written by some of the country's leading scientists, engineers, physicians, and other experts. The authors discuss intriguing issues in language that is understandable and compelling...without jargon. Celebrity Bill Cosby contributes an essay on "Getting the Facts Straight About Science." Television journalist Hugh Downs asks "Who Owns Antarctica?"

Readers learn the many ways in which science and technology affect their daily lives.

This volume makes groundbreaking scientific achievement accessible, fascinating—and fun. Bridging the gap between the experts and the public, it is a "must read" for anyone concerned about the future.