Chapter:Appendix A: Disentangling the Language of Commercial Sexual Exploitation and Sex Trafficking of Minors in the United States

As noted in Chapter 1, the committee found that the terms commercial sexual exploitation of children, often abbreviated to CSEC, and sex trafficking of minors frequently are used inconsistently in the law, by advocates and service providers, and in the scholarly literature on these issues. The committee believes that clarity and consistency in the use of these key terms are vital for a variety of purposes, including developing an in-depth understanding of these crimes; conducting, evaluating, and comparing relevant research; and developing appropriate laws, policies, and programs aimed at preventing, identifying, and responding to these abuses of children. This appendix explains how the two terms are both overlapping and distinct.

As used in law and by advocates, service providers, and researchers, commercial sexual exploitation of children covers a range of crimes. For example, the Office of Juvenile Justice and Delinquency Prevention (OJJDP), the sponsor of this study, uses the following definition of CSEC:

The commercial sexual exploitation of children (CSEC) involves crimes of a sexual nature committed against juvenile victims for financial or other economic reasons.… These crimes include trafficking for sexual purposes, prostitution, sex tourism, mail-order-bride trade and early marriage, pornography, stripping, and performing in sexual venues such as peep shows or clubs. 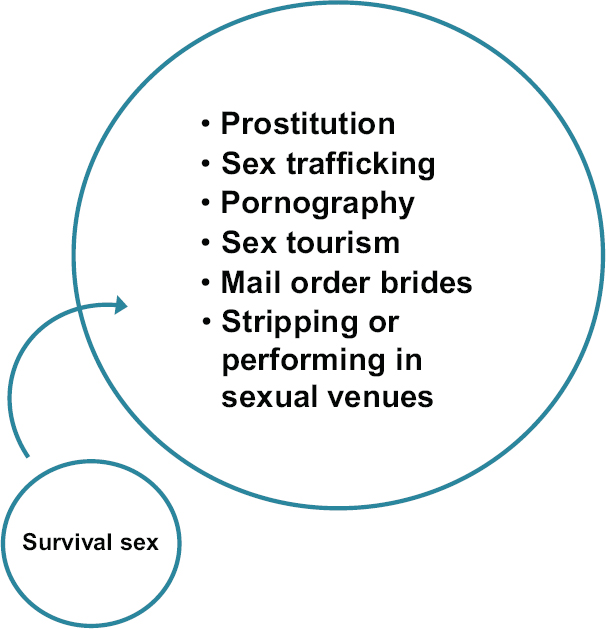 FIGURE A-1 Office of Juvenile Justice and Delinquency Prevention’s definition of commercial sexual exploitation of children.

Sex trafficking of minors is another term commonly used to describe commercial forms of sexual exploitation of children. The federal Trafficking Victims Protection Act (TVPA) defines sex trafficking of a minor as the “recruitment, harboring, transportation, provision, or obtaining of a person under age 18 for the purpose of a commercial sex act.”1 A commercial sex act is “any sex act on account of which anything of value is given to or received by any person.”2 As explained elsewhere in this report, it is important to note that sex trafficking does not require moving or transporting a victim.

Considerable confusion exists as to the distinction between CSEC and sex trafficking of minors, and, as noted above, the two terms often are used inconsistently. As Figure A-1 illustrates, the OJJDP definition includes sex trafficking as a subset of CSEC. That usage differs from other legal definitions. Under the TVPA (as well as the Protocol to Prevent, Suppress, and Punish Trafficking in Persons, Especially Women and Children, supplementing the U.N. Convention against Transnational Organized Crime, which established the first internationally agreed-upon definition of human trafficking and which the United States has ratified), the crime of human trafficking is understood to have three elements: an act, means, and purpose. The act includes such steps as recruiting, enticing, harboring, transporting, providing, obtaining, or maintaining an individual. The means must be by force, fraud, or coercion. And the purpose must be for some form of exploitation, including forced labor, commercial sexual exploitation, or other forms of exploitation. When the victim is a minor, force, fraud, or coercion does not need to be established. Therefore, recruiting, enticing, harboring, transporting, providing, obtaining, or maintaining a minor for the purpose of commercial sexual exploitation is sex trafficking of a minor. If one of these acts does not occur but a child is prostituted by an exploiter, that will constitute the crime of CSEC but not sex trafficking of a minor as the act requirement for trafficking is missing. If, on the other hand, one of the trafficking acts occurs for purposes of prostituting a child, that act can constitute both CSEC and sex trafficking of a minor. See Figure A-2 for an illustration of this point.

Although the committee’s task did not include endorsing a particular 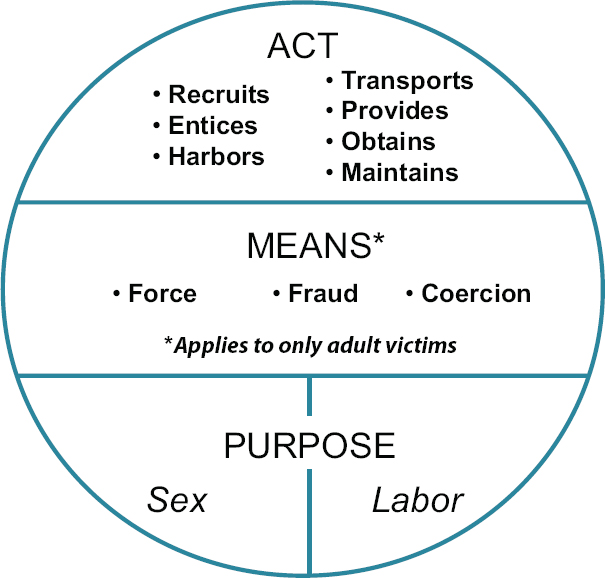 FIGURE A-2 Legal definition of human trafficking.
NOTE: This diagram is for illustrative purposes only; it does not indicate or imply percentages.

definition of CSEC or sex trafficking of a minor, the committee finds the legal definition to be helpful in distinguishing the two terms. The committee believes the OJJDP definition is useful in promoting understanding of the range of crimes that fit within CSEC, but that it can create some confusion—for example, by defining CSEC as including sex trafficking when the latter includes CSEC as one of its elements.

Even though the OJJDP definition differs from the TVPA and other widely accepted definitions, and despite differences in definitions employed by various jurisdictions and entities, the committee believes definitional issues and debates should not detract from the broader point that whether a child or adolescent is deemed a victim of CSEC or trafficking does not change the fact that he or she has been exploited and has suffered trauma, and that every victim and survivor should receive all necessary and appro-

priate services and assistance. Definitional issues, however, are important, as noted above, for measuring crime, prosecuting perpetrators, ensuring victims’ access to services, and other reasons. For those reasons, having consistent definitions is important. 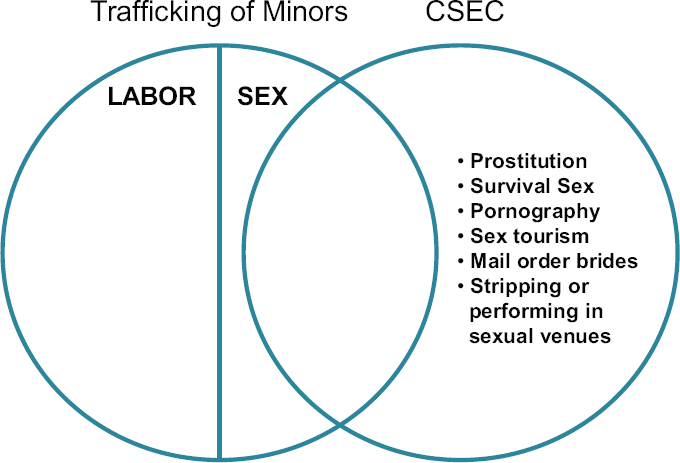 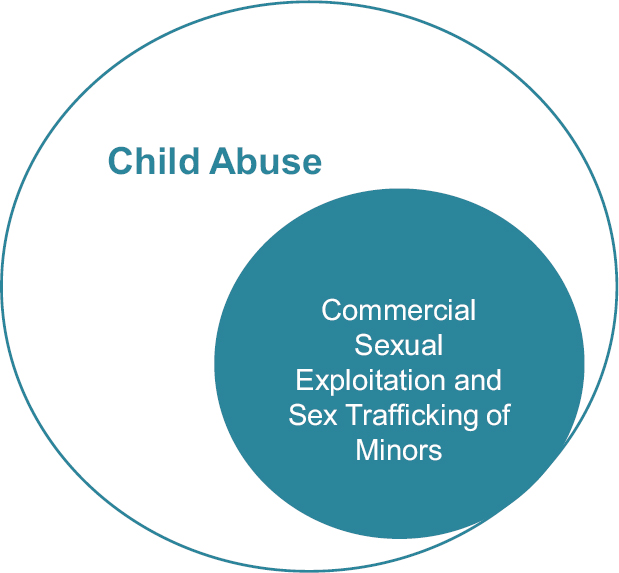 FIGURE A-4 Commercial sexual exploitation and sex trafficking of minors as forms of child abuse.
NOTE: This diagram is for illustrative Figure 1-purposes 1 and only; A-4 it does not indicate or imply percentages. 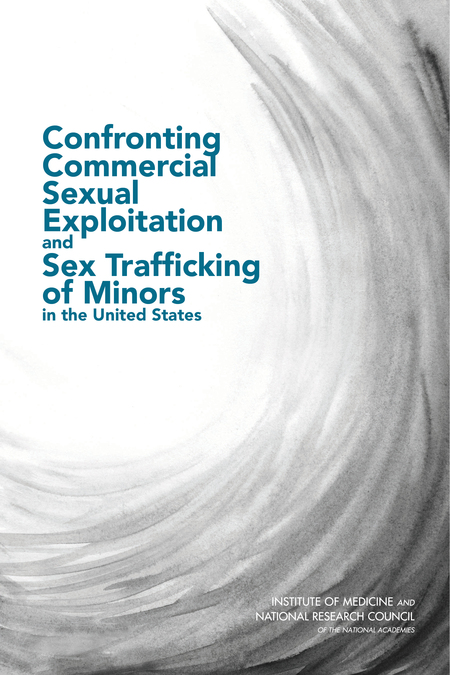 Every day in the United States, children and adolescents are victims of commercial sexual exploitation and sex trafficking. Despite the serious and long-term consequences for victims as well as their families, communities, and society, efforts to prevent, identify, and respond to these crimes are largely under supported, inefficient, uncoordinated, and unevaluated.

Confronting Commercial Sexual Exploitation and Sex Trafficking of Minors in the United States examines commercial sexual exploitation and sex trafficking of U.S. citizens and lawful permanent residents of the United States under age 18. According to this report, efforts to prevent, identify, and respond to these crimes require better collaborative approaches that build upon the capabilities of people and entities from a range of sectors. In addition, such efforts need to confront demand and the individuals who commit and benefit from these crimes. The report recommends increased awareness and understanding, strengthening of the law's response, strengthening of research to advance understanding and to support the development of prevention and intervention strategies, support for multi-sector and interagency collaboration, and creation of a digital information-sharing platform.