Get This Book
Visit NAP.edu/10766 to get more information about this book, to buy it in print, or to download it as a free PDF.
« Previous: 5 HAARP Diagnostic Instrumentation
Page 45 Share Cite
Suggested Citation:"6 Outreach and Connections." National Research Council. 2014. Opportunities for High-Power, High-Frequency Transmitters to Advance Ionospheric/Thermospheric Research: Report of a Workshop. Washington, DC: The National Academies Press. doi: 10.17226/18620.
×

Several workshop participants noted that support for the High Frequency Active Auroral Research Program (HAARP) and its user base has historically been from the Department of Defense (DOD), with Navy and Air Force support for a variety of military-related applications such as low-frequency communications and associated research in radio frequency (RF) and fundamental physics. In addition to the diagnostic upgrades discussed above, many participants noted that broadening the user base for HAARP would be necessary to fulfill the facilities’ potential for leading-edge research. Suggestions included making explicit connections to the well-defined strategic science plans of the National Science Foundation (NSF) Coupling, Energetic, and Dynamics of Atmospheric Regions (CEDAR) program community as well as to NASA and its programs in mesosphere-ionosphere-thermosphere (M-I-T) research, which are informed by strategic documents that include the National Research Council decadal survey in solar and space physics (NRC, 2013). Several workshop participants noted that this outreach to the CEDAR and NASA communities has not been done in the past; however, they suggested that the strong science possibilities brought to light at the workshop make this a valuable opportunity.

One participant suggested that a significant part of this outreach effort could include showing the difference between a “heater facility” and “the investigation of natural phenomena using artificial drivers.” While many of the underlying physical processes to be investigated remain the same, the science motivation has a different audience. Another participant noted that traceability to strategic science questions in the NASA and NSF strategic planning documents becomes important. Thus, the addition of the Poker Flat Incoherent Scatter Radar as a significant diagnostic was seen by some participants as a “game changer,” moving HAARP from being a facility to which a scientist brings a sensor to a science facility providing both processes for investigation and diagnostics to provide data. It was noted that creating a HAARP facility that includes both a heater and an incoherent scatter radar allows for the investigation of natural phenomena using artificial drivers in which, for example, the energy is generated as high frequency but delivered to the plasma as electron heating, after which the processes follow natural geophysical paths.

Some workshop participants discussed the challenge of how to integrate support from diverse scientific communities and agencies for a shared facility. The addition of improved diagnostic capabilities at HAARP was described as a key element in developing a facility that would be of high interest to both civilian and defense agencies. To familiarize the non-heater-using science community with the usefulness of active experiments, a participant suggested using a “buddy system” for experiments using HAARP, partnering long-time HAARP users with experienced ionospheric observers. Other outreach suggestions included making an effort to be a presence in non-heater sessions of ionospheric conferences and workshops such as CEDAR. (Heater sessions, while standard at a meeting like CEDAR, typically do not attract interest from the greater space science community.) One participant pointed out that a particular difficulty in integrating support among a broader user community will lie in securing support for HAARP operations, which cannot come from Air Force 6.1 (Basic Research) funds,1 or from NSF science funds.

The importance of demonstrating to the larger research community that active HAARP experiments can be a useful geophysics research tool was noted both by workshop participants who were regular users of HAARP and other heaters and by those who were unfamiliar with active experiments. In this regard, it was observed by Kristina Lynch that the workshop’s Focus Area 1, “HF Contributions to M-I-T Science: MLT and Thermospheric Physics,” shows the strongest connection to ionospheric strategic science plans. Particularly of note, according to this and some other participants, are the opportunities involving neutral density studies. Focus Area 2, “HF Contributions to M-I-T Science: Ionospheric Physics,” was said to also be of interest; however, Lynch and some participants were concerned that the effects of HAARP on magnetosphere-ionosphere coupling would prove to be of too small a scale for conclusive coupling science results. Nevertheless, some participants thought the use of local controlled experiments in the mesosphere and lower troposphere/thermosphere region to address strategic NASA and NSF questions would be able to provide closure on a number of open questions, as delineated in previous sections.

Next: 7 Costs Associated with HAARP Future Operations or Closure »
Opportunities for High-Power, High-Frequency Transmitters to Advance Ionospheric/Thermospheric Research: Report of a Workshop Get This Book
× 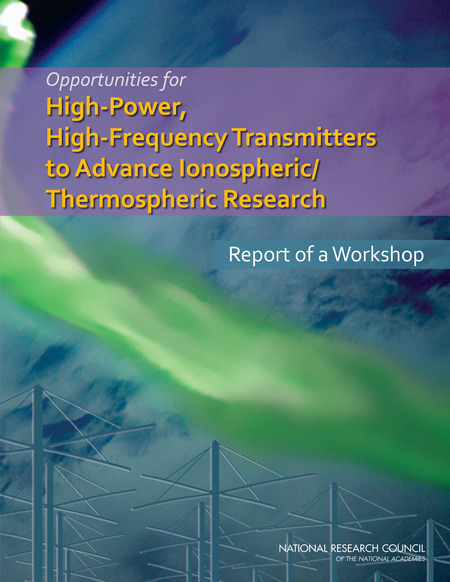