Get This Book
Visit NAP.edu/10766 to get more information about this book, to buy it in print, or to download it as a free PDF.
Page i Share Cite
Suggested Citation:"Front Matter." National Research Council. 1992. China and Global Change: Opportunities for Collaboration. Washington, DC: The National Academies Press. doi: 10.17226/2075.
×

Committee on Scholarly Communication with the People's Republic of China

Founded in 1966, the CSCPRC represents American scholars in the natural and engineering sciences, the social sciences, and the humanities, including Chinese studies. The Committee is composed of scholars from all of these fields. In addition to administering exchange programs, the CSCPRC advises individuals and institutions on scholarly communication between the United States and China. Administrative offices of the CSCPRC are located in Washington, D.C.

Copyright 1992 by the National Academy of Sciences. All rights reserved.

COMMITTEE ON SCHOLARLY COMMUNICATION WITH THE PEOPLE'S REPUBLIC OF CHINA

Human impacts on the environment transcend political and geographic boundaries. For example, atmospheric emissions from one country can impact ecosystems half-way around the world from it. The scale of these impacts has given rise to the term "global change." However, scientific understanding of these global change processes is very limited, and better understanding and timely responses will depend on international cooperation. To this end, the International Council of Scientific Unions has established the International Geosphere-Biosphere Program and, with the World Meteorological Organization, the World Climate Research Program.

The active involvement and contributions of developing countries to the study of global change are crucial. And China, by virtue of having 22 percent of the world's population and being a significant contributor to carbon dioxide, methane, sulfur dioxide, chlorofluorocarbon, and other greenhouse gas emissions, is one of the most important of these countries. China's emissions are already having a profound impact locally, and regional and global impacts are of growing concern. Moreover, because of China's projected population growth and reliance on high-sulfur coal for 75 percent of its energy needs, a potential exists for substantially greater impacts in the future.

change and the impact of global change on China. Furthermore, Chinese geography, such as the Loess and Qinghai-Tibet Plateaux and extensive coastline provide fertile territory for investigating processes that regulate the Earth's environment. A wealth of unique historical proxy data offers a unique and significant contribution to studies of past global changes. Most importantly, China has a community of scientists who recognize the importance of global change studies and who are committed to improving our understanding of China and global change.

The study of global change sciences in China was itself a collaborative effort between the panel and our colleagues in China. Without their assistance in gathering information, their patient and extensive explanations of their work and priorities, and their openness and collegiality—the spiritual backbone of this effort—the study would not have been possible. As this report shows, the Chinese global change program is extensive, so I am not able in this space to thank all of the Chinese scientists to whom we are indebted. We sincerely appreciate the efforts and support of Ye Duzheng, chairman of the Chinese National Committee for the IGBP, Lin Hai of the National Natural Science Foundation, Fu Congbin, Shi Yafeng, Chen Panqin, Wang Hui, Cheng Erjin, and An Jianji from the Chinese Academy of Sciences, Ding Yihui of the Chinese Academy of Meteorological Sciences, and Liu Chunzheng of the Ministry of Water Resources. To the institute directors and the scientists at the institutions the panel visited, named and unnamed in the report, we very much appreciate your hospitality and cooperation.

The production of this report required the efforts of many individuals. I am deeply appreciative to the panel members who found time in already overcommitted schedules to travel to China and tackle the job of sorting through the extensive body of information the panel compiled. In particular, my thanks to Dave Schimel and Shaw Liu for organizing Chapter 5. The panel is indebted to the substantial support received from the Committee on Scholarly Communication with the People's Republic of China (CSCPRC), which was absolutely essential for the completion of a successful report. John Olsen, Gao Xing, Keith Clemenger, and Yuan Xiansheng of the National Academy of Sciences/CSCPRC Beijing Office proved time and again the value and necessity of having a local presence in China in carrying out such a study. Jim Reardon-Anderson, former CSCPRC director, should be thanked for believing in the importance of global change issues and in convening a panel to increase our knowledge of Chinese efforts in this area. Beryl Leach, staff officer for the panel, made key contributions to this report: her insights into the organization of

Chinese institutions and extensive knowledge of Chinese research agendas helped guide the panel when it otherwise might have gone astray; her written contributions were valuable to the panel; and her ability to put scientific jargon into a readable form make this report what it is. As chairman, I especially valued her motivation for excellence and her humor when the going got tough. The panel was also assisted by contributions from Kathleen Norman, project assistant for the panel during part of its work, who ably researched and compiled the information contained in Appendix C and who organized the administrative and logistical details of panel meetings. Extensive and helpful literature reviews were carried out Fan Songmiao, Liang Jinyou, Fu Jimeng, and Kate LeJeune. Marc Abramson, CSCPRC summer intern, conducted background research on Chinese global change efforts that helped launch initial panel efforts. I would also like to thank Alice Hogan, program manager for the U.S.-China Program at the National Science Foundation, for the funding from the Division of International Programs that supported the panel's work. Although space does not permit thanking individuals by name, we greatly appreciated the cooperation of the international program officers in U.S. government agencies who kindly provided the panel with information about their agencies' work with China.

This report provides a road map through the Chinese global change program and identifies opportunities for collaborative research. The report will be a success if collaboration increases between the Chinese and U.S. global change communities, and I have no doubt that great potential exists for such an increase. However, global change research requires a change in how collaborative research is supported. As this report shows, most collaborative projects to date are short-term, and by their nature, produce primarily short-term benefits. To obtain the depth of understanding required for global-scale issues, sustained support is required. It is critical that mechanisms be developed to support such efforts in order to take advantage of the opportunities offered to the world by China and its scientists in the arena of global change research.

Next: Executive Summary »
China and Global Change: Opportunities for Collaboration Get This Book
× 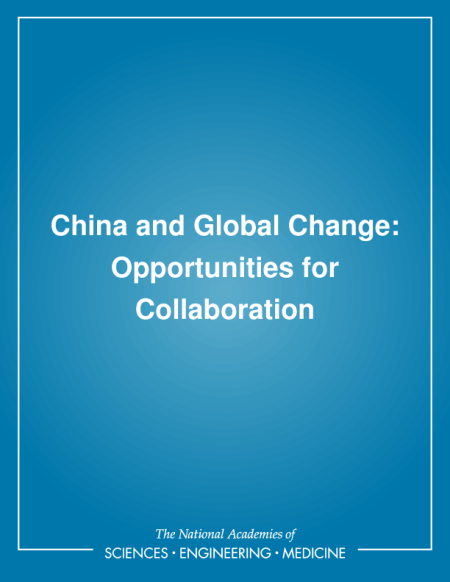 Given China's current and potential impacts on the global environment and the contributions Chinese science can make to global change research, China's full participation in international research programs dealing with global change is very important.

This book provides insights into how research priorities are determined and detailed information about institutional infrastructure, human resources, and other factors that will constrain or facilitate Chinese responses to and research on global change issues.

An overview of research relevant to the International Geosphere-Biosphere Program and the World Climate Research Program is presented. Additionally, research in certain areas of atmospheric chemistry and physical and ecological interactions of the atmosphere and land surface are explored in further detail.