Get This Book
Visit NAP.edu/10766 to get more information about this book, to buy it in print, or to download it as a free PDF.
« Previous: Appendix B: Meetings and Presentations
Page 136 Share Cite
Suggested Citation:"Appendix C: International Incentives." Transportation Research Board and National Research Council. 2015. Overcoming Barriers to Deployment of Plug-in Electric Vehicles. Washington, DC: The National Academies Press. doi: 10.17226/21725.
×

This appendix provides some information about the incentive programs in Japan, France, Norway, Germany, the Netherlands, and China.

In 2007, France introduced a fee-bate (bonus-malus) system for vehicle purchases based on the carbon dioxide (CO2) emissions of the vehicle. The policy levies a fee depending on the CO2 emission performance of the vehicle ranging from €150 to €8,000 and provides a rebate ranging from €150 to €6,300.2 The dealer can advance the bonus at the point of sale to reduce the purchase price directly. PEVs qualify for the highest bonus of €6,300. The bonus-malus system generated deficits in its first few years (2008-2010) owing to unexpectedly high demand for the lower-CO2 emitting vehicles but led to substantial reductions in the CO2 emissions of new vehicles sold in France (Beltramello 2012). Average new light-duty vehicle CO2 per kilometer moved from being the fourth lowest to the lowest in the European Union since the program started in 2007 (Brand et al. 2013). The bonus-malus system is periodically updated, with the most recent revision having become effective in January 2014.

The bonus-malus system appears to be an effective consumer incentive. According to the French government, the French market for PEVs and hybrid electric vehicles (HEVs) represented 3.1 percent of the global passenger vehicle market in France. Compared with 2012, sales of PEVs increased by 50 percent and sales of HEVs increased by 60 percent. In total, 8,779 PEVs were registered in France in 2013. Sales increased by more than 50 percent compared with the 5,663 vehicles registered in 2012.

The government of Norway has made a firm commitment to battery electric vehicles (BEVs), motivated in part by the desire to reduce the greenhouse gas (GHG) emissions of its transportation fleet. Because almost 100 percent of Norway’s electricity is generated from hydroelectric power, a transition to BEVs would decarbonize the passenger vehicle fleet almost entirely. Forty percent of Norway’s GHG emissions currently come from the transportation sector, and 60 percent of those come from road transport (Deshayes 2011).

According to a recent study of an incentive scheme scheduled to last through 2017 (Doyle and Adomaitis 2013), the Norwegian government provides tax breaks of up to $11,000 over the lifetime of a PEV, or about $1,400 per year. The tax breaks include no purchase tax, no annual registration tax, and no value-added tax (VAT) (Doyle and Adomaitis 2013). As part of the scheme, commuters do not pay road

1 The fiscal year for the national Japanese budget cycle runs from June to May.

2 For more specific break-downs on the bonus-malus system, see: http://www.developpement-durable.gouv.fr/Bonus-Malus-2014.html.

tolls, worth $1,400 annually, and they receive free parking worth $5,000. PEVs are permitted in bus lanes and have access to free public charging at 466 parking spots in Oslo (Doyle and Adomaitis 2013).

As of the beginning of 2013, PEV sales accounted for 3 percent of total passenger car sales, a much higher fraction than in most countries. A total of 12,000 PEVs had been sold in Norway as of 2013, with about half in the Oslo region (Ingram 2013a). Nonetheless, some (for example, Doyle and Adomaitis 2013) have criticized the incentive program because it encourages families to purchase a PEV as a second car and rely on their gasoline- or diesel-powered vehicle for longer-range trips. However, even if that is the practice, families might be driving more electric miles during the course of everyday life. Although the programs could prove to be an environmental benefit, Norway might not be able to sustain such a financial commitment. It spends about $13,600 in tax incentives to reduce CO2 emissions by just one tonne. This cost is much higher than the prevailing price of CO2 on the European Union emissions trading market (Ingram 2013b).

Germany does not currently offer consumer incentives and is instead relying on a demonstration program in four major regions. German vehicle manufacturers are investing heavily in hydrogen fuel-cell vehicles (FCVs), and, other than BMW, they have been slow to embrace PEVs.

The Netherlands has extensive consumer incentives for PEVs and at one time these incentives equaled as much as 85 percent of the price of a new plug-in hybrid electric vehicle (PHEV), although they have since been scaled back. Unsurprisingly, the Netherlands has become a hot market for PEV manufacturers and is Tesla’s second biggest market besides the United States after Norway. The Dutch government is especially motivated to support BEVs because most of the larger cities in the Netherlands experience severe urban air pollution. Municipal governments are also keen to reduce urban noise, especially in the evenings, and find that noise reduction from BEV taxis and delivery vans greatly improves the quality of city life (Nissan 2012). The Dutch government also views BEV deployment as consistent with its climate change goals and strategy. Not having significant domestic vehicle production, there is little resistance to importing BEVs from abroad.

The tax incentive structure is unique among all the countries examined because corporate buyers overwhelmingly dominate the Dutch new-vehicle market, and most new vehicles are bought by firms for their employees. Employees must pay income tax (bijtelling) for vehicles received from their employers. For example, 25 percent of the value of a new vehicle is added to an employee’s personal income, and then he or she must pay income tax on the total. The bijtelling tax is assessed on the basis of grams of CO2 per kilometer, and for high-emitting vehicles, the tax rate is 25 percent. For BEVs, the bijtelling tax rate is 4 percent. BEV buyers also enjoy a purchase tax incentive, whereby through 2017 they pay no tax for vehicles with low CO2 emissions and are exempt from a vehicle-use tax, which is normally based on weight and kilometers driven. Employees are therefore motivated to encourage their employers to buy them BEVs. The federal government is also providing a purchase subsidy for BEV taxis and delivery vans used in urban areas to help cope with urban air pollution and noise. Amsterdam, Arnhem, The Hague, Rotterdam, and Utrecht add an additional purchase subsidy for taxis and delivery vans (€5,000) and trucks (€40,000) and are particularly motivated as no new construction may occur in the city until air pollution has been reduced (Dutch Ministry of Economic Affairs 2014). The incentives are especially important to consumers because Dutch electricity prices are high (€0.28/kWh), so the consumer incentive to use electricity as a fuel is minimal.

Beginning in 2006, China made a major push toward PEVs. Given China’s heavy reliance on coal to generate electricity, the main environmental benefits for the country could be cleaner air in some cities and a reduction in noise pollution. However, according to a recent analysis by Ji et al. (2012), replacing gasoline vehicles with PEVs in China with its current electricity supply mix will result in higher CO2 emissions and increased mortality risk from PM2.5 (particulate matter less than 2.5 micrometers in diameter) in most Chinese cities. In any case, the Chinese government views a shift to PEVs to be beneficial to China’s energy security. China is a net importer of coal and its current reserve-to-production ratio of coal is only 31 years (BP 2013). The energy security benefits are therefore not apparent. As of March 2013, there were about 28,000 PEVs registered in China, of which about 80 percent were public buses.

As of 2010, there were 135 million electric bicycles in China (Jie and Hagiwara 2013).3 China is already the largest electric bicycle producer and consumer, accounting for about 90 percent of the global market. The Chinese government research and development program for clean, light-duty vehicles initially focused almost equally on FCVs, BEVs, and PHEVs. In China’s Five-Year Plan (2006-2010), however, the government’s emphasis shifted strongly to BEVs.

3 As of 2008, 970 invention patents had been applied for through the State Intellectual Property Organization (SIPO) based on the research of the Chinese government’s Energy-Saving and New Energy Vehicle Programme (Ouyang 2009).

purchase of public transportation vehicles, such as buses and locally stated-owned taxis. It has been alleged that some local governments have imposed “buy local” provisions so that the local PEV firms benefit at the expense of PEV companies elsewhere in China and around the world (Zeng 2013).

Ingram, A. 2013b. “How Much Is Norway Paying to Promote Electric Cars?” Green Car Reports, March 15. http://www.greencarreports.com/news/1082915_howmuch-is-norway-paying-to-promote-electric-cars.

METI (Ministry of Economy, Trade, and Industry). 2013. “Our Policy about Promoting EVs.” Presentation to the Committee on Overcoming Barriers to Electric-Vehicle Deployment, Tokyo, Japan, December 9. 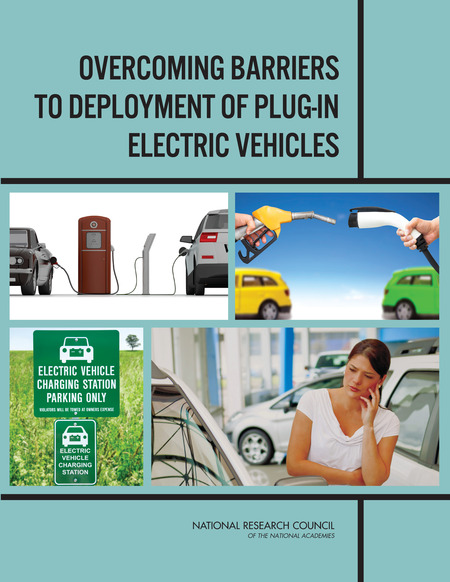 In the past few years, interest in plug-in electric vehicles (PEVs) has grown. Advances in battery and other technologies, new federal standards for carbon-dioxide emissions and fuel economy, state zero-emission-vehicle requirements, and the current administration's goal of putting millions of alternative-fuel vehicles on the road have all highlighted PEVs as a transportation alternative. Consumers are also beginning to recognize the advantages of PEVs over conventional vehicles, such as lower operating costs, smoother operation, and better acceleration; the ability to fuel up at home; and zero tailpipe emissions when the vehicle operates solely on its battery. There are, however, barriers to PEV deployment, including the vehicle cost, the short all-electric driving range, the long battery charging time, uncertainties about battery life, the few choices of vehicle models, and the need for a charging infrastructure to support PEVs. What should industry do to improve the performance of PEVs and make them more attractive to consumers?

At the request of Congress, Overcoming Barriers to Deployment of Plug-in Electric Vehicles identifies barriers to the introduction of electric vehicles and recommends ways to mitigate these barriers. This report examines the characteristics and capabilities of electric vehicle technologies, such as cost, performance, range, safety, and durability, and assesses how these factors might create barriers to widespread deployment. Overcoming Barriers to Deployment of Plug-in Electric Vehicles provides an overview of the current status of PEVs and makes recommendations to spur the industry and increase the attractiveness of this promising technology for consumers. Through consideration of consumer behaviors, tax incentives, business models, incentive programs, and infrastructure needs, this book studies the state of the industry and makes recommendations to further its development and acceptance.