Get This Book
Visit NAP.edu/10766 to get more information about this book, to buy it in print, or to download it as a free PDF.
« Previous: 6 Summary
Page 34 Share Cite
Suggested Citation:"7 Additional Considerations." National Academies of Sciences, Engineering, and Medicine. 2015. Review of the MEPAG Report on Mars Special Regions. Washington, DC: The National Academies Press. doi: 10.17226/21816.
×

The committee’s review of the SR-SAG2 report mainly focused on the scientific basis of the detailed assignment of the Special Region status to specific geomorphologies associated with the accumulation of water/ice and fluid flows. While the committee mostly concurred with those findings, it noted the lack of discussion in the SR-SAG2 report on the likeliness of Earth microbes thriving in Special Regions. The discussion presented in Chapter 2 of this report provides additional biological considerations (e.g., production of EPS in natural communities of microbes) that show the high flexibility by microbial communities in propagating in harsh conditions. However, the SR-SAG2’s analysis does not attempt to calculate or weigh the probability of any contaminating microbes from a spacecraft cleanroom on Earth actually surviving and growing in each of the newly assigned Mars Special Regions. Propagation of contaminant life from Earth on Mars on a large scale, in addition to water and temperature, will need redox gradients of abundant electron donors and acceptors for chemolithotrophic bacteria or metabolites that other microbes might use. For such a community to transplant to Mars, the co-dependent members must survive the transit to Mars and all thrive in the new Mars environment.

In the past century, the bioburden limits were defined in the implementation guidelines of the COSPAR planetary protection policy and are still valid. They are based on a specific cultivation assay after a heat treatment of each sample. According to the general opinion at that time, only very resistant microbes in the form of bacterial spores are detected by this assay, and only these seemed to be relevant for Mars because they might be able to survive there. However, the definition of Special Regions specifically refers to the ability of organisms to multiply, not just survive. The spores enumerated with the standard planetary protection bioburden assay are heterotrophic mesophilic aerobes. This type of organism could survive under certain circumstances on Mars, but they cannot multiply there due to the generally low temperatures, the lack of oxygen in the atmosphere, and insufficient concentrations of organic compounds for metabolism.

At the time the standard assay was developed, extremophiles, among them many thermophilic and hyperthermophilic archaea and bacteria, were not yet discovered. In the intervening years, researchers have learned that the majority of microbes are not cultivable and that several extremophiles that do not form spores are, nevertheless,

resistant to many extreme environmental conditions. Therefore, the applied bioburden measurements detecting only a very small portion of the present microbes can only be seen as a proxy for the overall bioburden.

The committee is of the opinion that bioburden assays have to be modified to give more relevant information about non-spore forming microbes with the physiological potential to survive and even replicate on Mars taking the new molecular based methods into consideration.

Suggestions for future research directions can be found in Appendix A.

Next: References »
Review of the MEPAG Report on Mars Special Regions Get This Book
× 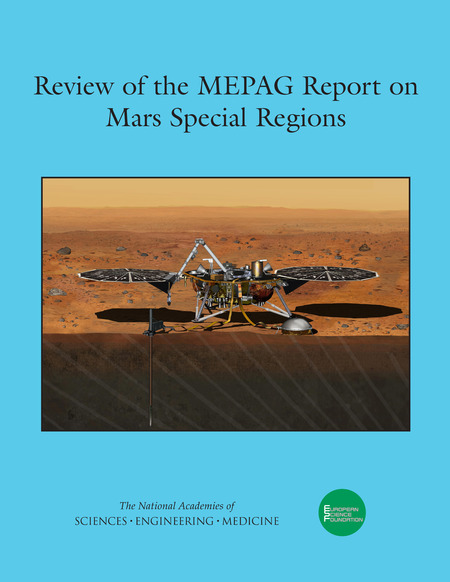