Optimizing the Nation's Investment in Academic Research: A New Regulatory Framework for the 21st Century (2016)

Chapter:Appendix F: A Brief Primer on the Paperwork Reduction Act

Get This Book
Visit NAP.edu/10766 to get more information about this book, to buy it in print, or to download it as a free PDF.
« Previous: Appendix E: Federal Research and Development Spending
Page 249 Share Cite
Suggested Citation:"Appendix F: A Brief Primer on the Paperwork Reduction Act." National Academies of Sciences, Engineering, and Medicine. 2016. Optimizing the Nation's Investment in Academic Research: A New Regulatory Framework for the 21st Century. Washington, DC: The National Academies Press. doi: 10.17226/21824.
×

A Brief Primer on the Paperwork Reduction Act

2The supporting statement must include answers to 18 questions. For collections of information collections employing statistical methods, an additional five questions must be answered. The questions and cover sheet may be found at http://www.whitehouse.gov/sites/default/files/omb/inforeg/83i-fill.pdf.

3United States Code. The U.S. Code is a consolidation and codification by subject matter of the general and permanent laws of the United States.

ly affected,” and “maximize the practical utility of and public benefit from information collected by or for the Federal Government.”5

National Institutes of Health (NIH) grant application forms are approved by OMB under OMB Number 0925-0001. Burden hours to complete the documents are estimated by NIH in Table F-1.

The agency also specifies the cost associated with this burden using a dollar value of $35/hour (this implies the agency assumes that much of the information collection is performed by administrative personnel).

NIH is also listed as one of the users of grants.gov form SF-424 (Application for Federal Assistance). The OMB Number is 4040-0001 for the basic form and 4040-0004 for supplemental information (each form is approved separately by OMB). The online grants.gov approvals are approved for 1 hour per application. The physical version of the primary form lists the burden as varying by agency [(from 15 minutes for the U.S. Agency for International Development to 4.4 hours for the Department of Health and Human Services (HHS)]. The physical version of the supplemental form lists the burden as varying from 1.07 hours [Department of Defense (DOD)] to 120 hours [National Science Foundation (NSF) and the Department of Homeland Security (DHS)]. HHS lists burden hours as 58 hours.

It is unclear how this 58-hour estimate (or the 4.4-hour estimate for completing the SF-424 for HHS grants) relates to the 24-hour estimate approved for HHS by OMB or whether HHS has OMB approval for this estimate.

NSF grant application forms are approved by OMB under OMB Number 3145-0058. NSF estimates that applicants expend an average of approximately 120 burden hours for each proposal submitted. NSF expects to receive approximately 51,600 proposals in FY 2015, which would result in a total of 6,192,000 burden hours.

This is the extent of the detail that NSF provides on its estimates. The agency does not monetize its estimate.

For NSF, the 120-hour estimate matches the approved burden estimate for form SF-424 that appears on grants.gov.

Other agencies rely, in part, on the grants.gov approval for their PRA approval. However, it appears that there is variation amongst agencies with regard to the approval of supplemental materials. For example, the Department of Energy requires a “budget justification” for its grants. Under OMB Number 1910-5162, the agency has approval for 24 burden hours. However, the actual supplemental burden for form SF-424 is listed as 1.5 hours. It is unclear whether these numbers refer to different things.

On form SF-424, DOD burden hours are listed as only 1.07 hours. However, DOD grant websites contain numerous DOD forms that do not have OMB Numbers on them,6 suggesting that these forms have not been approved for information collection by OMB as required by the PRA.

Next: Appendix G: The Grants Process at the National Science Foundation and the National Institutes of Health »
Optimizing the Nation's Investment in Academic Research: A New Regulatory Framework for the 21st Century Get This Book
× 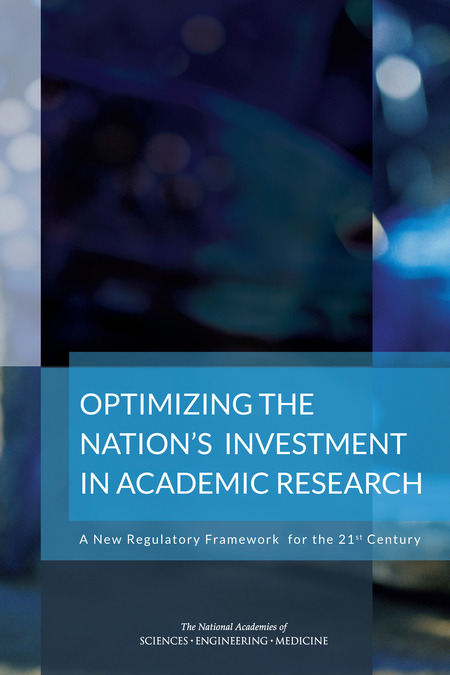 Research universities are critical contributors to our national research enterprise. They are the principal source of a world-class labor force and fundamental discoveries that enhance our lives and the lives of others around the world. These institutions help to create an educated citizenry capable of making informed and crucial choices as participants in a democratic society. However many are concerned that the unintended cumulative effect of federal regulations undercuts the productivity of the research enterprise and diminishes the return on the federal investment in research.

Optimizing the Nation's Investment in Academic Research reviews the regulatory framework as it currently exists, considers specific regulations that have placed undue and often unanticipated burdens on the research enterprise, and reassesses the process by which these regulations are created, reviewed, and retired. This review is critical to strengthen the partnership between the federal government and research institutions, to maximize the creation of new knowledge and products, to provide for the effective training and education of the next generation of scholars and workers, and to optimize the return on the federal investment in research for the benefit of the American people.