Get This Book
Visit NAP.edu/10766 to get more information about this book, to buy it in print, or to download it as a free PDF.
« Previous: 5 Cross-Cutting Issues That Face All Urban Environments
Page 75 Share Cite
Suggested Citation:"6 Closing Remarks." National Academies of Sciences, Engineering, and Medicine. 2015. Bringing Public Health into Urban Revitalization: Workshop Summary. Washington, DC: The National Academies Press. doi: 10.17226/21831.
×

In the workshop’s final session, Roundtable chair Frank Loy offered some closing comments. He said that he was not attempting to summarize the workshop but, rather, was sharing thoughts on some of the issues that stood out to him the most.

To begin with, he said, it is important to keep in mind that the assurance of health involves more than simply the provision of medical services. One must take into account the environments in which people live as well as equity and sustainability. In that sense, he said that he thought that the workshop had offered a very rich and useful discussion because it was focused on an aspect of health and medicine—the role of the built environment, in particular—that is often not at the forefront.

Loy reiterated a point made by Gregory Kats in his presentation: that it is generally possible to make progress on health only by involving two other constituencies, private enterprise and the community. Health care professionals operating on their own will not be nearly as successful as those who collaborate with these two other groups, he said.

The most effective way to get the private sector involved is to demonstrate that it is profitable, Loy said, and the return-on-investment demonstration that Kats offered was a very powerful approach to that. Just like anything else, health needs to be sold, he said, and the health community must understand that and embrace it.

“In the case of the community,” he continued, “what I was reminded of today is that issues such as an equitable society, a decent quality of life for all, and a respect for human dignity are not just the maraschino cherry on top of the ice cream. They are central to getting what we want done in the area of health.” This should not be surprising, he added, because dignity is a huge part of what makes human beings tick. “A desire for fairness is built into every one of us. Some of us come out a little better on the fairness side of life than others. It is not surprising that the absence of fairness is a handicap to health care professionals who try

to improve the health of the various societies that sometimes are quite suspicious.”

Next Loy mentioned the idea, described by Kimberlydawn Wisdom, of using a hospital or other health care facilities for community activities that have nothing to do with health. In particular, he pointed to hospitals serving good food and making it available to the broader community. It seems like a very effective way of integrating an institution into the community, he said. He also appreciated the idea of a hospital providing a place where people can congregate for such activities as playing cards and said that it should make the institution seem less formidable and more friendly.

In the discussion of the Rebuild by Design competition for coming up with ways to rebuild the New York area after Hurricane Sandy, Loy said he was struck by the idea of using foundation money to enable architects, health care professionals, and others to organize themselves so that they can maximize the use of the government funds that are made available in a situation like this. It seems like a good way to “divide the labor” among the various funding agencies, he said.

One comment from the discussion on food that was particularly striking, Loy said, was that some people view the arrival of the Safeway in an underserved area as a worrisome first step toward gentrification. “It seems to me that, having griped about the absence of food opportunities and food choices in the poorest section of our city, the arrival of a Safeway … ought to be celebrated and not feared,” he said. “Somehow or other, we have to deal with the proposition that when you provide options, … some families are going to move into that neighborhood … because they have a grocery store. I can’t believe that is bad. I just didn’t quite get that part.”

A second food-related discussion that Loy found interesting was the difference of opinion concerning whether the rules concerning the food stamp program should be changed to encourage the purchase of healthier foods. How one views that question will likely depend on how one feels about the rights of the individual versus the regulatory reach of the government. This is an issue that deserves additional discussion, he said, and, he hoped, it is something that the Roundtable will be able to return to in the future.

Next: Appendix A: Workshop Agenda »
Bringing Public Health into Urban Revitalization: Workshop Summary Get This Book
× 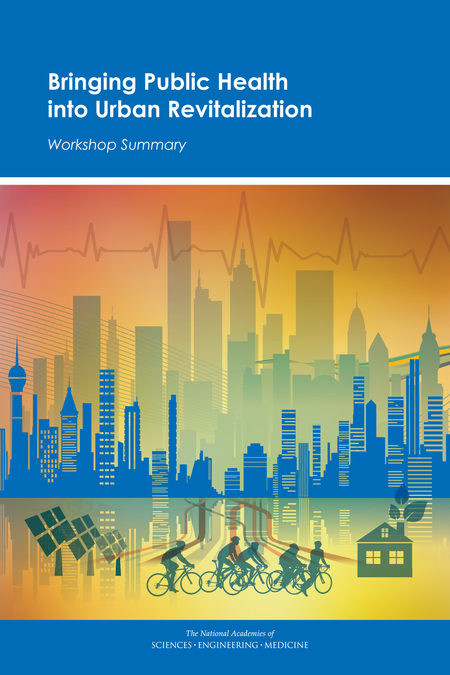 A particularly valuable opportunity to improve public health arises when an urban area is being redesigned and rebuilt following some type of serious disruption, whether it is caused by a sudden physical event, such as a hurricane or earthquake, or steady economic and social decline that may have occurred over decades. On November 10, 2014, the Institute of Medicine's Roundtable on Environmental Health Sciences, Research, and Medicine held a workshop concerning the ways in which the urban environment, conceived broadly from factors such as air quality and walkability to factors such as access to fresh foods and social support systems, can affect health. Participants explored the various opportunities to reimagine the built environment in a city and to increase the role of health promotion and protection during the process of urban revitalization. Bringing Public Health into Urban Revitalization summarizes the presentations and discussions from this workshop.