The Health Effects of Cannabis and Cannabinoids: The Current State of Evidence and Recommendations for Research (2017)

Get This Book
Visit NAP.edu/10766 to get more information about this book, to buy it in print, or to download it as a free PDF.
« Previous: 16 Recommendations to Support and Improve the Cannabis Research Agenda
Page 403 Share Cite
Suggested Citation:"Appendix A Glossary." National Academies of Sciences, Engineering, and Medicine. 2017. The Health Effects of Cannabis and Cannabinoids: The Current State of Evidence and Recommendations for Research. Washington, DC: The National Academies Press. doi: 10.17226/24625.
×

Ashworth scale—a clinical measure of muscle spasticity based on an assessment of a patient’s muscle tone in different muscle groups.

association—the statistical relation between two or more events, characteristics, or other variables.

cannabidiol (CBD)—a constituent of cannabis that has been traditionally considered non-psychoactive.

cannabinoid—one of a class of chemical compounds that act on cannabinoid receptors, cannabinoids can be naturally derived from the cannabis plant or manufactured.

cannabis—a broad term that can be used to describe the various products and chemical compounds derived from the Cannabis sativa or Cannabis indica species.

cannabis use disorder (CUD)—according to the Diagnostic and Statistical Manual of Mental Disorders, Fifth Edition, a problem-causing pattern of cannabis use leading to clinically significant impairment or distress, as manifested by at least two distinguishing symptoms (e.g., cannabis is taken in larger amounts or for longer periods than intended; experience of craving; continued cannabis use despite the experience of physical, social, or interpersonal problems caused by cannabis use) occurring within a 12-month period.

case series—an analysis of a series of people with the disease (there is no comparison group in case series). Case series studies provide weaker evidence than case-control studies.

case-control study—an observational analytic study that enrolls one group of persons with a certain disease, chronic condition, or type of injury (case-patients) and a group of persons without the health problem (control subjects) and compares differences in exposures, behaviors, and other characteristics to identify and quantify associations, test hypotheses, and identify causes.

cohort study—an observational analytic study in which enrollment is based on one’s status of exposure to a certain factor or membership in a certain group. Populations are followed, and disease, death, or other health-related outcomes are documented and compared. Cohort studies can be either prospective or retrospective.

comparator—the agent to which the experimental arm of a study is compared (e.g., placebo, usual care, active control).

control—comparator against which the study treatment is evaluated (e.g., concurrent [placebo, no treatment, dose–response, active], and external [historical, published literature]).

cross-sectional study—a study in which a sample of persons from a population are enrolled and their exposures and health outcomes are measured simultaneously; a survey.

cultivar—a plant variety that has been produced in cultivation by selective breeding.

dose—the quantity of a drug that is used at one time or in fractional amounts during a given period of time.

dronabinol—a synthetic cannabinoid for oral administration, similar to tetrahydrocannabinol (THC). It is the active ingredient in Marinol®.

evidence—information on which a conclusion about a cause-effect relationship is based. The most direct evidence for health effects in humans is usually based on studies of health endpoints that are conducted in humans, including randomized trials and nonrandomized epidemiologic studies. Additional evidence can be provided by studies of intermediate endpoints or markers in humans as well as by nonhuman studies. The committee has developed a strength-of-evidence table so that the level of evidence is expressed in uniform terms and calibrated throughout the report (see Appendix B).

exclusion criteria—a list of characteristics in a protocol, any one of which may exclude a potential subject from participation in a study.

incidence—the number of new cases of a condition, symptom, death, or injury that develop during a specified period of time.

inclusion criteria—the criteria in a protocol that prospective subjects must meet to be eligible for participation in a study.

meta-analysis—a statistical technique for combining (pooling) the results of a number of studies that address the same question and report on the same outcomes to produce a more precise summary estimate of the effect on a particular outcome. Meta-analyses are frequently used in systematic reviews.

morbidity—any departure, subjective or objective, from a state of physiological or psychological health and well-being (e.g., disease, injury, disability).

mortality—death or loss of life.

nabilone—a synthetic cannabinoid for oral administration, similar to tetrahydrocannabinol (THC). It is the active ingredient in Cesemet®.

observational study—a study in which the investigator observes rather than influences exposure and disease among participants. Case-control and cohort studies are examples of observational studies.

odds ratio (OR)—one measure of treatment effectiveness. It is the odds of an event happening in the experimental group expressed as a proportion of the odds of an event happening in the control group. The closer the OR is to 1, the smaller the difference in effect is between the experimental intervention and the control intervention. If the OR is greater (or less) than 1, then the effects of the treatment are more (or less) than those of the control treatment. Note that the effects being measured may be adverse (e.g., death or disability) or desirable (e.g., survival). When events are rare, the OR is analogous to the relative risk (RR), but as event rates increase, the OR and RR diverge.

pooled estimate—an average derived from multiple studies with varying data but with a common measurement. Typically found in systematic reviews and meta-analyses.

potency—the amount of drug required to produce a specific level of effect.

prevalence—the number or proportion of individuals within a given population who share a specific characteristic.

randomized controlled trial (RCT)—a trial in which participants are randomly assigned to one of two or more groups, at least one of which (the experimental group) receives an intervention that is being tested and another (the comparison or control group) receives an alternative treatment or placebo. This design allows assessment of the relative effects of interventions.

relative risk (RR)—a ratio of the risk of an event among an exposed population to the risk among the unexposed.

route of administration—the path by which a drug is taken into the body.

systematic review—research that summarizes the evidence on a clearly formulated question according to a predefined protocol. Systematic and explicit methods to identify, select, and appraise relevant studies and to extract, collate, and report their findings are used. Statistical meta-analysis may or may not be used. Systematic reviews were the optimal data source for identifying associations between cannabis exposure and all of the health endpoints discussed in this report.

Next: Appendix B Study Approach »
The Health Effects of Cannabis and Cannabinoids: The Current State of Evidence and Recommendations for Research Get This Book
× 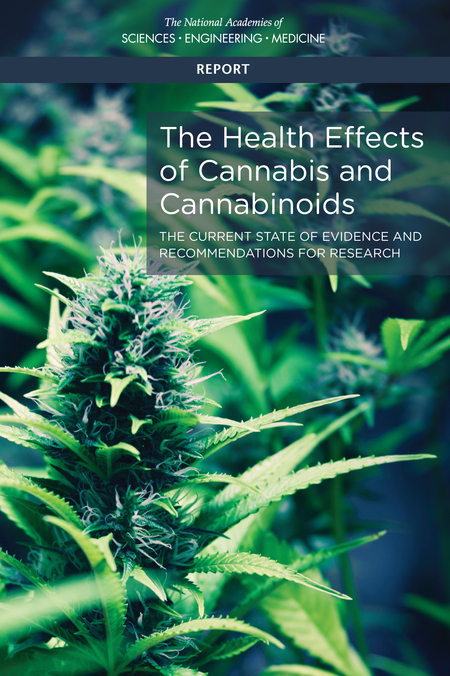 Significant changes have taken place in the policy landscape surrounding cannabis legalization, production, and use. During the past 20 years, 25 states and the District of Columbia have legalized cannabis and/or cannabidiol (a component of cannabis) for medical conditions or retail sales at the state level and 4 states have legalized both the medical and recreational use of cannabis. These landmark changes in policy have impacted cannabis use patterns and perceived levels of risk.

However, despite this changing landscape, evidence regarding the short- and long-term health effects of cannabis use remains elusive. While a myriad of studies have examined cannabis use in all its various forms, often these research conclusions are not appropriately synthesized, translated for, or communicated to policy makers, health care providers, state health officials, or other stakeholders who have been charged with influencing and enacting policies, procedures, and laws related to cannabis use. Unlike other controlled substances such as alcohol or tobacco, no accepted standards for safe use or appropriate dose are available to help guide individuals as they make choices regarding the issues of if, when, where, and how to use cannabis safely and, in regard to therapeutic uses, effectively.

Shifting public sentiment, conflicting and impeded scientific research, and legislative battles have fueled the debate about what, if any, harms or benefits can be attributed to the use of cannabis or its derivatives, and this lack of aggregated knowledge has broad public health implications. The Health Effects of Cannabis and Cannabinoids provides a comprehensive review of scientific evidence related to the health effects and potential therapeutic benefits of cannabis. This report provides a research agenda—outlining gaps in current knowledge and opportunities for providing additional insight into these issues—that summarizes and prioritizes pressing research needs.