Population Health Science in the United States: Trends, Evidence, and Implications for Policy: Proceedings of a Joint Symposium (2022)

Get This Book
Visit NAP.edu/10766 to get more information about this book, to buy it in print, or to download it as a free PDF.
« Previous: 4 Effective Population Health Policy and Science: Finding Common Ground
Page 43 Share Cite
Suggested Citation:"5 Closing Remarks." National Academies of Sciences, Engineering, and Medicine. 2022. Population Health Science in the United States: Trends, Evidence, and Implications for Policy: Proceedings of a Joint Symposium. Washington, DC: The National Academies Press. doi: 10.17226/25631.
×

In the final session of the joint National Academies of Sciences, Engineering, and Medicine and Interdisciplinary Association for Population Health Science (IAPHS) symposium, David Kindig, emeritus professor of population health sciences at the University of Wisconsin–Madison, reflected on the discussions and shared his perspective on the primary challenge for population health going forward.

More than two decades ago, Kindig published a book on population health improvement in which he said he “laid out a very ambitious timeline for research, debate, and implementation in several phases.” A key principle of the book, Kindig said, was that “population health improvement will not be achieved until appropriate financial incentives are aligned for this outcome” (Kindig, 1997). Reflecting on the current state of population health he acknowledged that there have been accomplishments, including a recognition of the importance of health equity and the role of social determinants of health, but there is much still to be done, he said.

The Roundtable on Population Health Improvement has highlighted resources, goals and metrics, science-informed interventions, policies, communication and movement building, and partnerships as key drivers of population health improvement. However, finances loom large, and

1 The comments in this section refer solely to remarks made by David Kindig of the University of Wisconsin–Madison and are not necessarily endorsed or verified by the National Academies of Sciences, Engineering, and Medicine, and they should not be construed as reflecting any group consensus.

Kindig referred to his prior work in which he said that the key population health question to be addressed is the following:

In a resource-limited world, what is the optimal national and local per capita investment, and policy strength across sectors (health care, public health, health behavior, social factors, physical environment) for improving overall health and reducing disparities?

Referring to the comments by Whelan (see Chapter 4) about the need to understand the total cost of care (beyond the cost of health care), Kindig said that the total health budget required is unknown. It is not the figures provided by the Centers for Medicare & Medicaid Services Office of the Actuary report on health care spending, he said. A complete health budget, he continued, would include adequate resources for public health, as well as a share of investments in other sectors that have a role in promoting health (e.g., education, housing, economic development). He acknowledged that there are many challenges to developing such a budget.

The roundtable mission states that population health improvement, including health equity, will require more robust national and community-based actions and dependable resources.2 To develop more dependable streams of financial resources, Kindig said that it is necessary to move beyond grants and short-term appropriations. He mentioned the funding of crop subsidies, mortgage interest deductions, and Medicare medical education payments as examples of dependable funding formulas. He also called on the population health sector to use its political clout to support resource allocation for other sectors that affect health (as mentioned above, early childhood support, economic development, housing). Kindig referred participants to a publication (Kindig, 2015) in which he challenged the population health field to move from benchmarks based only on health determinants (e.g., smoking, poverty rates) to benchmarks based on investments in health (e.g., per capita investment to achieve determinant benchmarks).

In closing, Kindig drew attention to an electronic survey about future population health research priorities for IAPHS meeting attendees to

respond to.3 Results would then be summarized in a presentation on the final day of the IAPHS meeting.

3 The survey can be viewed at https://iaphs.org/population-health-survey (accessed July 27, 2020).

Next: Appendix A: References »
Population Health Science in the United States: Trends, Evidence, and Implications for Policy: Proceedings of a Joint Symposium Get This Book
× 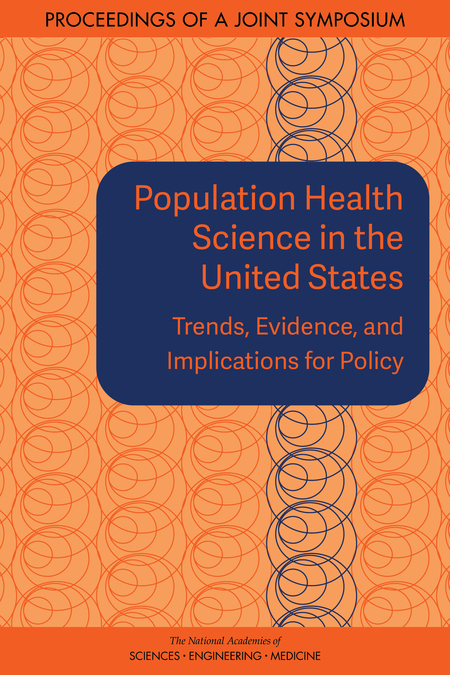 On October 3, 2018, the Roundtable on Population Health Improvement of the National Academies of Sciences, Engineering, and Medicine and the Interdisciplinary Association for Population Health Science convened a joint symposium in Washington, DC to consider the current state of population health science in the United States. At the symposium, speakers and participants reviewed the status of population health in the United States, including current trends in health and mortality, and racial, ethnic, and socioeconomic disparities; explored the complexities of policy implementation with attention to evidence generation and to surfacing and mitigating negative unintended consequences of policies for population health; and shared perspectives on finding common ground to move population health forward. This publication summarizes the presentation and discussion of the workshop.