Visit NAP.edu/10766 to get more information about this book, to buy it in print, or to download it as a free PDF.
« Previous: Chapter 4 - Case Examples
Page 49 Share
Suggested Citation:"Chapter 5 - Findings and Conclusion." National Academies of Sciences, Engineering, and Medicine. 2021. Transit Safety Risk Assessment Methodologies. Washington, DC: The National Academies Press. doi: 10.17226/26449.
×

49Â Â  Findings and Conclusion This report provides a state of the practice when it comes to transit safety risk assessment in the United States. ChapterÂ 1 reviews the scope of this project (to identify what SRA methodologies and/or approaches transit systems are using for SRA methodologies). ChapterÂ 2 summarizes the literature, covering the methodologies within and outside of transit in the United States and internationally. ChapterÂ 3 describes the findings from a survey of North American transit agencies, including diversity in terms of geography, socioeconomics, size, and all types of vehicles in transit revenue service. ChapterÂ 4 describes the findings of case examples selected from the survey respondents and highlights notable practices, challenges, and lessons learned, especially for new and innovative state-of-the-practice methodologies. This chapter will conclude with overall findings and future research needs. Findings The following bullet points highlight the findings of this project: â¢ Most agencies use a single SRA methodology, and the MIL-STD-882 or a slightly modified version thereof are the most popular methods. The most common modification differentiat- ing the former from the latter is an adjustment to the traditional number of levels of either frequency/probability (6) or severity (4). â¢ Transit organizations reported using the SRA most frequently on the following processes: â On hazards and other safety concerns that are identified through inspections and internal audits, â On hazards and other safety concerns reported by employees, riders, or both, and â When investigating a safety event, accident, or incident. â¢ Nearly all organizations have a level of risk that is deemed âacceptable.â However, the structured interviews suggest that this level is not well defined, nor is it consistent across agencies. Rather, it is more important for agencies to be aware of the potential risks associated with a process and to have strategies in place to mitigate harmful effects, if needed. It could be theorized that agencies have a known risk appetite, which can be defined as the âamount and type of risk that an organization is willing to pursue or retainâ (Manoukian, 2016). Once that threshold has been breached, individual risks are assessed at a more detailed level to reduce the overall risk level to better coincide with the agencyâs appetite. This theory could potentially be the focus of future research, once agencies have had the opportunity to implement and refine their recently submitted PTASPs. â¢ Transit organizations like using the MIL-STD-882 because it is uniform, well-defined, organized, and widely accepted across the industry. â¢ The MIL-STD-882 is disliked because many find it confusing and highly subjective. â¢ The modified MIL-STD-882 can be confusing as well as resource intensive. The modified MIL-STD-882âs primary benefit is that it allows for a higher degree of customization than its C H A P T E R 5

50 Transit Safety Risk Assessment Methodologies parent methodology. This customization is a key aspect of this method that makes it scalable across agencies. However, increased customization and scalability also lead to difficulty in comparison across agencies, particularly those of various size. For example, a risk to a large transit agency may be defined as âmarginalâ in terms of severity; however, this same risk may be defined as âcatastrophicâ to a small agency with more limited resources. Similarly, the interviews revealed that some agencies modify the number of levels of probability or severity. This includes (1) the addition of levels, (2) the addition of real dollar values to severity levels, and/or (3) the addition of real-time frames to probability levels. These are all attempts to customize/scale these SRA methods. This process often makes agency-to-agency compari- sons more challenging. â¢ Proponents of the European common method suggest that it is more pragmatic, in line with regulatory requirements (particularly for Canadian organizations), and beneficial because it incorporates CM. â¢ It can be difficult for transit employees to understand not only the SRA process itself, but also how they fit into the overall process. Agencies reported relying most heavily on internal training programs, while some agencies chose to use consultants. The structured interviews revealed that most agencies felt like internalizing the process helped nurture a feeling of ownership. Even so, more and better online tools and training documentation would be welcomed. â¢ Numerous agencies stated that the SRA process is very resource intensive. The SRA is often one of many tasks with which an individual or group is tasked. In most instances, the SRA is managed by a safety committee. â¢ Funding is a limiting factor for conducting SRA. â¢ It could appear cumbersome at the beginning for traditional agencies to adopt any new SRA method, which is common when an agency starts standardizing what used to be informal procedures. The case examples suggest that one of the best ways to overcome this problem, as well as to encourage employees to report hazards and other safety concerns, is to get the identified issues fixed, even small ones. The survey responses suggest that a minority of participating transit agencies (about 15Â percent) rely to some degree on consultants for their SRA. All of these agencies indicated their use of consultants was minimal. Most often, consultants were relied upon for specialized training or projects deemed critical through the lens of safety and/or public perception. At least one transit organization mentioned that having ownership of the SRA process led to the implementation of beneficial change within the organization. In turn, this sense of ownership led to a feeling of pride in a job well done. The agency also noted that there is perceived value in bringing in a consultant to do the technical assessment for higher-level risks. In the absence of budget to hire a consultant, dedicated staff and tools guide the assessment, but the process can quickly become subjec- tive, particularly for agencies using MIL-STD-882 or the modified MIL-STD-882. â¢ It is also important to note that the Canadian CSM requires that an independent safety assessor accredited by the Standards Council of Canada carry out an independent assessment of the suitability of both the application of the risk management process and of its results. This represents an opportunity to use a consultant. Future Research The following bullet points describe suggestions for future research: â¢ Most agencies in the United States use MIL-STD-882 or a slightly modified version. SRA is relatively new to some agencies. More research on other SRA methods adopted by inter- national transit agencies in the future would be beneficial to gain a deeper understanding of various SRA methods and tailor them to the specific agencyâs needs. Although this

Findings and Conclusion 51Â Â  survey did obtain feedback from international agencies, overall international participation was low. â¢ Training on SRM processes was discussed with each of the case example agencies. What was not included in this report was whether the training was effective. Future research would also be helpful about the relative effectiveness of SRM training. â¢ Although MIL-STD-882 is the default SRA methodology for transit agencies, there are benefits of using other methodologies for different situations. One agency uses several meth- odologies and then translates results into MIL-STD-882 nomenclature for comparison purposes. Future research is needed to further examine which methodologies are best for a given situation or process. â¢ Future research would also be helpful for acceptable risk. Most agencies surveyed have a level of acceptable risk. For example, what is acceptable risk in rail versus bus/on-demand or in terms of private sector versus public sector?

Next: References »
Transit Safety Risk Assessment Methodologies Get This Book
× 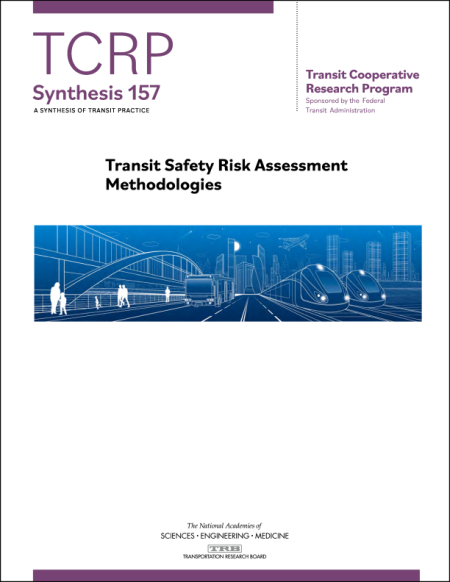