Prudent Practices in the Laboratory: Handling and Disposal of Chemicals (1995)

Get This Book
Visit NAP.edu/10766 to get more information about this book, to buy it in print, or to download it as a free PDF.
« Previous: Bibliography
Page 217 Share Cite
Suggested Citation:"Appendix A: OSHA Laboratory Standard." National Research Council. 1995. Prudent Practices in the Laboratory: Handling and Disposal of Chemicals. Washington, DC: The National Academies Press. doi: 10.17226/4911.
×

"Chemical Hygiene Officer" means an employee who is designated by the employer, and who is qualified by training or experience, to provide technical guidance in the development and implementation of the provisions of the Chemical Hygiene Plan. This definition is not intended to place limitations on the position description or job classification that the designated individual shall hold within the employer's organizational structure.

"Chemical Hygiene Plan" means a written program developed and implemented by the employer which sets forth procedures, equipment, personal protective equipment and work practices that (i) are capable of protecting employees from the health hazards presented by hazardous chemicals used in that particular workplace and (ii) meets the requirements of paragraph (e) of this section. "Combustible liquid" means any liquid having a flashpoint at or above 100 deg. F (37.8 deg. C), but below 200 deg. F (93.3 deg. C), except any mixture having components with flashpoints of 200 deg. F (93.3 deg. C), or higher, the total volume of which make up 99 percent or more of the total volume of the mixture.

"Designated area" means an area which may be used for work with "select carcinogens," reproductive toxins or substances which have a high degree of acute toxicity. A designated area may be the entire laboratory, such as a laboratory hood.

"Emergency" means any occurrence such as, but not limited to, equipment failure, rupture of containers or failure of control equipment which results in an uncontrolled release of a hazardous chemical into the workplace.

"Employee" means an individual employed in a laboratory workplace who may be exposed to hazardous chemicals in the course of his or her assignments.

"Explosive" means a chemical that causes a sudden, almost instantaneous release of pressure, gas, and heat when subjected to sudden shock, pressure, or high temperature.

"Flammable" means a chemical that falls into one of the following categories:

"Flashpoint" means the minimum temperature at which a liquid gives off a vapor in sufficient concentration to ignite when tested as follows:

"Hazardous chemical" means a chemical for which there is statistically significant evidence based on at least one study conducted in accordance with established scientific principles that acute or chronic health effects may occur in exposed employees. The term "health hazard" includes chemicals which are carcinogens, toxic or highly toxic agents, reproductive toxins, irritants, corrosives, sensitizers, hepatotoxins, nephrotoxins, neurotoxins, agents which act on the hematopoietic systems, and agents which damage the lungs, skin, eyes, or mucous membranes. Appendices A and B of the Hazard Communication Standard (29 CFR 1910.1200) provide further guidance in defining the

scope of health hazards and determining whether or not a chemical is to be considered hazardous for purposes of this standard.

"Laboratory scale" means work with substances in which the containers used for reactions, transfers, and other handling of substances are designed to be easily and safely manipulated by one person.

"Laboratory scale" excludes those workplaces whose function is to produce commercial quantities of materials. "Laboratory-type hood" means a device located in a laboratory, enclosure on five sides with a movable sash or fixed partial enclosed on the remaining side; constructed and maintained to draw air from the laboratory and to prevent or minimize the escape of air contaminants into the laboratory; and allows chemical manipulations to be conducted in the enclosure without insertion of any portion of the employee's body other than hands and arms. Walk-in hoods with adjustable sashes meet the above definition provided that the sashes are adjusted during use so that the airflow and the exhaust of air contaminants are not compromised and employees do not work inside the enclosure during the release of airborne hazardous chemicals.

"Laboratory use of hazardous chemicals" means handling or use of such chemicals in which all of the following conditions are met:

"Medical consultation" means a consultation which takes place between an employee and a licensed physician for the purpose of determining what medical examinations or procedures, if any, are appropriate in cases where a significant exposure to a hazardous chemical may have taken place.

"Organic peroxide" means an organic compound that contains the bivalent —O—O— structure and which may be considered to be a structural derivative of hydrogen peroxide where one or both of the hydrogen atoms have been replaced by an organic radical.

"Oxidizer" means a chemical other than a blasting agent or explosive as defined in 1910.109(a), that initiates or promotes combustion in other materials, thereby causing fire either of itself or through the release of oxygen or other gases.

"Physical hazard" means a chemical for which there is scientifically valid evidence that it is a combustible liquid, a compressed gas, explosive, flammable, an organic peroxide, an oxidizer pyrophoric, unstable (reactive) or water-reactive.

"Select carcinogen" means any substance which meets one of the following criteria:

"Unstable (reactive)" means a chemical which in the pure state, or as produced or transported, will vigorously polymerize, decompose, condense, or will become self-reactive under conditions of shocks, pressure or temperature. "Water-reactive" means a chemical that reacts with water to release a gas that is either flammable or presents a health hazard.

As guidance for each employer's development of an appropriate laboratory Chemical Hygiene Plan, the following non-mandatory recommendations are provided. They were extracted from "Prudent Practices for Handling Hazardous Chemicals in Laboratories" (referred to below as "Prudent Practices"), which was published in 1981 by the National Research Council and is available from the National Academy Press, 2101 Constitution Ave., NW, Washington DC 20418.

"Prudent Practices" is cited because of its wide distribution and acceptance and because of its preparation by members of the laboratory community through the sponsorship of the National Research Council. However, none of the recommendations given here will modify any requirements of the laboratory standard. This appendix merely presents pertinent recommendations from "Prudent Practices," organized into a form convenient for quick reference during operation of a laboratory facility and during development and appli-

cation of a Chemical Hygiene Plan. Users of this appendix should consult "Prudent Practices" for a more extended presentation and justification for each recommendation.

"Prudent Practices" deals with both safety and chemical hazards while the laboratory standard is concerned primarily with chemical hazards. Therefore, only those recommendations directed primarily toward control of toxic exposures are cited in this appendix, with the term "chemical hygiene" being substituted for the word "safety." However, since conditions producing or threatening physical injury often pose toxic risks as well, page references concerning major categories of safety hazards in the laboratory are given in section F.

The recommendations from "Prudent Practices" have been paraphrased, combined, or otherwise reorganized, and headings have been added. However, their sense has not been changed.

Corresponding Sections of the Standard and This Appendix

A. General Principles for Work with Laboratory Chemicals

In addition to the more detailed recommendations listed below in sections B-E, "Prudent Practices" expresses certain general principles, including the following:

Responsibility for chemical hygiene rests at all levels (6, 11, 21) including the:

ods of evaluation and for calculation of estimated airborne contaminant concentrations.

These should include for each laboratory:

tion in accordance with the requirements of state and federal regulations (12).

Prominent signs and labels of the following types should be posted:

E. Basic Rules and Procedures for Working with Chemicals

The Chemical Hygiene Plan should require that laboratory workers know and follow its rules and procedures. In addition to the procedures of the sub programs mentioned above, these should include the rules listed below.

The following should be used for essentially all laboratory work with chemicals:

contact with allergens or substances of unknown allergenic activity (35).

Supplemental rules to be followed in addition to those mentioned above (Procedure B of "Prudent Practices", pp. 39-41):

stances are appropriately labeled with identity and warning labels (48).

The above recommendations from "Prudent Practices" do not include those which are directed primarily toward prevention of physical injury rather than toxic exposure. However, failure of precautions against injury will often have the secondary effect of causing toxic exposures. Therefore, we list below page references for recommendations concerning some of the major categories of safety hazards which also have implications for chemical hygiene:

The following references are provided to assist the employer in the development of a Chemical Hygiene Plan. The materials listed below are offered as nonmandatory guidance. References listed here do not imply specific endorsement of a book, opinion, technique, policy or a specific solution for a safety or health problem. Other references not listed here may better meet the needs of a specific laboratory.

Next: Appendix B: Laboratory Chemical Safety Summaries »
Prudent Practices in the Laboratory: Handling and Disposal of Chemicals Get This Book
× 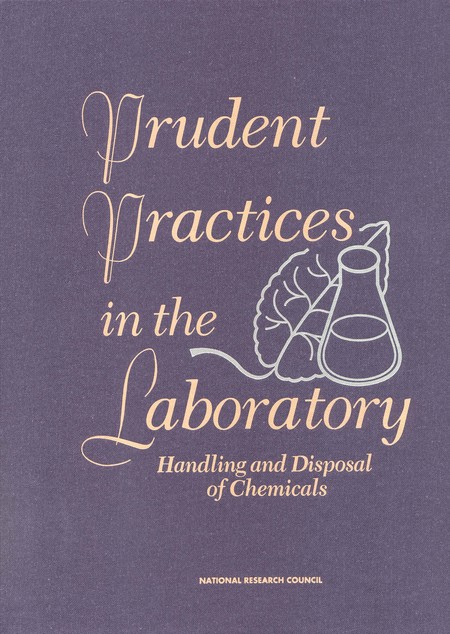 Developed by experts from academia and industry, with specialties in such areas as chemical sciences, pollution prevention, and laboratory safety, Prudent Practices for Safety in Laboratories provides step-by-step planning procedures for handling, storage, and disposal of chemicals. The volume explores the current culture of laboratory safety and provides an updated guide to federal regulations. Organized around a recommended workflow protocol for experiments, the book offers prudent practices designed to promote safety and it includes practical information on assessing hazards, managing chemicals, disposing of wastes, and more.