123 The procedure is described below in step by step form and Is shown in Figure 70. It follows the general outline of We 1994 HEM Update, in Chapter Ten, Part m, Procedure for Application. . . Chapter Ten RECOMMENDED COMPUTATIONAL PRO CEDUR1ES This documents We computational procedures Mat are recommended for computing capacitor and level of service analysis at TWSC intersections. INPUT. Tic ~ tt NO ~ - CAPACITY AND IMPEDANCE I | | V,, - CO N FLICKING TO LO M E | 1 ~ _ HARDENS OAF. ~ MAJOR LO l - PEDEST. IMP. . CRINOID RT I ~ MINORS TO _ I . MINOR LT 2 - YES PART I I PART 11 1 MBN LT | MIN LT I Two ~ ~ - | 2STAG'E CAP. | _ INTERIM CAPACITY 'NO I AVG QUEUE l NO ~ ~ | FLARED CAPACITY | DELAY  +~ DELAY . MOVEMENT .. APPROACH . INTERSECTION - - AL = ~_ | QUEUES I | AVERAGE WARR^NTt;~ Figure 70. Recommended Computational Procedure Step ~ - Input Data and Requirements Identify and document the foBow~ng input data. Refening to Figure 71: Me vehicular volumes by movement for the hour of interest: Vat, V2, V3, V4, Vs' V6, V', Vat, Vg, VIO, Vat,, V,2., and the pedestnan volumes by movement for the hour of interest divided by average group sizes: VL.' VR, VO, Vs. (Note: U-turn tragic is counted as major street left turn). Percentage of heavy vehicles: PHV PHVis the Combination Vehicles(%) + SU/RV(%) Peak hour factor: PHF. Number of through lanes on Me major street: N per direction. Major street left turn has shared lanes or blocks rank ~ flows: saturation discharge flow for major through and major right turns S2&3, S58~6 Number and use of lanes on the minor street approaches. Number of legs at the intersection: L'. Grade of all approaches(°/O). Other geometric features of interest: channelization, two-way left-turn lane, railed/striped median: storage k in median, flared approach: storage k for right turn, upstream signals for each direction i=2 amd/or 5 for the platooned flow(s): cycle Ci, green time gi, initial offset of, saturation flow si, platooned flow Vpi, distance from intersection d Step 2 - Volume Adjustment The only adjustment for the volumes is to convert the Vi ; into 15-m~nute volumes, if a 15-m~nute analysis is desired I in which case all the volumes should be divided by the ' PHF.

125 Table 55. Recommended Follow-Up Time Values Ad]~*nent Factors Heavy Vehicle. Note: *O.9-second adjustment for sintle-lane sins, and l.O-second adjustment for multi-Lane sow Combined follows time is computed based on the proportion of passenger cars and heavy vehicles. ** In 2- stage gap acceptance station, use same k as for V7. Vim Step 4 - Adjus~anent of Capacity for Effect of Upstream Signals (cm,8 and cm,,~; cm,7 and c,,,l0) Refer to Figure 61. This step should be used when an upstream signal is less than or equal to I/4 mile Tom Me TWSC intersection. Step 4.~. Obtain the platoon dispersion "spread ratio" for each upstream signal (direction 2 Tom left and direction 5 Tom nght). Use the dine-distance concept In Appendix I of the 1994 HEM as a basis for the method. Add a platoon dispersion sub-model, similar to the recursive aIgon~m used by TRANYST-7F signal analysis software (Van Aerde et al 1995~: Q' = FQ'-T + (1-F)Q,'~ Ohs) where A' are the vehicles Moving at the subject location In time slice t Qua are the vehicles departing from the upstream signal In time slice t Fis ~ /~} +~pta) T=pta to is the distance to upstream signal / average speed of platoon a is the dispersion factor alpha (constant for a given roadway) ,8 is the dispersion factor beta (constant for a given roadway) The algorithm is used to disperse a platoon departing at sanction flow rate from the upstream signal. The "spread ratio" at the TWSC location is defined as ache ratio between the time the dispersed platoon occupies at the TWSC location and the time that the platoon required to discharge Dom the upstream signal. Checks that the spread ratio does notnes~tinjoining of platoons from adjacent cycles, or in flows less Man the non platooned Bows. If either of these situations occurs then there is no effect of signals from that direction. Step 4.2. Calculate the platooned and nomplatooned flow rates at the subject TWSC intersection. The platoon flow is obtained by dividing the platooned flow rate at the upstream signalby~e spread ratio. The unplatooned flow rate is obtained by multiplying the unplatooned volume by the spread ratio. Check that unplatooned flow is less than the platooned flow. If not, Mere is no effect of signals Dom that direction. Step 4.3. Use the cycle lengths, Initial oif;ets, queue  discharge times, and the spread ratios to calculate a series of "begin platoon" and "end platoon" events from each major street for the whole analysis period. Step 4.4. Sort these events chronologically and examine their sequence to calculate the proportion of the hour during which each of the following fow arrival flow "regimes" exists: no platoons platoons both directions platoons from left only platoons from right only The flows within each ofthese regimes are obtained in step 4.2. Step 4.5. For each controlled movement at the TWSC intersection, the capacity is calculated as the weighted average (using He proportions in step 4.4) of the capacities within each flow regime (as win He current 1994 HEM method) i.e. steps 4 through 17 are repeated. Step 5 - Computation of Capacity for Rank 2 Major Left Turn Movements (c,,,l anti c,,,) Step 5.1. Compute total conflicting volume Vc 1 and Vc4 based on Table 56.

131 shared lane, veh/hr; · T is the analysis time penod, hr. (T = 0.25). Step 13. Determination of Delay to Rank ~ Vehicles {;P2, D3, Ds, D6) If the major street left turns 1, 4 share a lane with rank ~ movements 2 and 3, 5 and 6 respectively, then these rank ~ movements may experience delay due to blockage by the major left turns. The proportion of rank 1 vehicles being blocked is 1-p*oi as defined belong. Note that on a multilane road, only the major street volumes In the lane which may be blocked should be used in the calculation as V `' and V i2. On multilane roads if it is assumed that blocked rank 1 vehicles do not bypass the blockage by moving across into over Trough lanes (a reasonable assumption under conditions of high major street flows) then Vi, = VAN. The average delay to.rank 1 (through j or right turn k at,,= vehicles on this approach is Even by: ~ (i - pa;) x d'"°P~kp X ~ Vl,[ Vit ~ yin N21 (~84) (I po')Xd~kfl N=1 As defined In step 4 (and In 1994 HEM Equation 10-3~: p*0 = 1- Pa i 1- (S'+S ~ where (185) i=1,4; j = 2, if i = 1, or =5,ifi=4; kit 3, if i= 1, or =6, ifi=4; Sj is the saturation flow rate for major street through traffic streams So is the saturation flow rate for major street right turn traffic Step 14. Determination of Level of Service Step 14.1. Check volume/capacibr ratio for each minor street movement. If V/c2 1, then LOS ="F". Determine levelofservice according to Table 58 for each minor street movement or approach lane, and the major street leR turn. (Note that the LOS thresholds have been adjusted to be equivalent to those for signalized intersections, so that direct comparisons for a given movement are more valid). Step 14.2. Detente weighted average total delays and LOS aggregated for each approach. Step 14.3. Determine the weighty average total delays and LOS aggregated for ad delayed vehicles, including 1be delayed rank ~ vehicles, in the entire intersection  Step 14.4 Determine the weighted average total delays and LOS for aggregated for all movements, including un- delayed rank ~ vehicles, In We entire ~ntersechom Table 58. Determination of LOS Based on Average Delay ll E | s6.S >6.6 and s l9.S >19.6 and s32.S >32.6 and sS2 >S2.1 and s78 >80 Step 15. Determination of Average Queue Lengths (delay in vehicle-hours) For each of the four levels of aggregation in Step 14 calculate the average queue, the product of Me number of subject vehicles and the average delay divided by 3600. Step 16. Adjustment of Capacity for Flared Minor Approach (c, .,8 and c', ,~; C,,,, 7 and c,,, I) Refer to Figure 74: Step 16.~. Let the shared lane case be the worst case. Calculate the total approach capacity cam, then delay in vehicle hours (step 14~. This is equivalent to the average queue on the approach for the shared lane case. Step 16.2. Let the separate lane case be the best case. Calculate the total approach capacity c,~ = c708+c,, then delay in vehicle hours (i.e. skip the sham lane calculation in step Il. Den recompute steps 12 Trough 15~. This is equivalent to the average queue on the approach for the separate lane case. Step 16.3. Derive amaximumieng~ in vehicles A,,, of the flared area above which traffic flows approximately like it would tee on two separate lanes. This could be assumed to be equivalent to the average queue in 16.2 plus one vehicle rounded up to an integer number of vehicles (alternatively, a more conservative approach would be to calculate and

Next: References »
Capacity and Level of Service at Unsignalized Intersections: Final Report Volume 1 - Two-Way-Stop-Controlled Intersections Get This Book
× 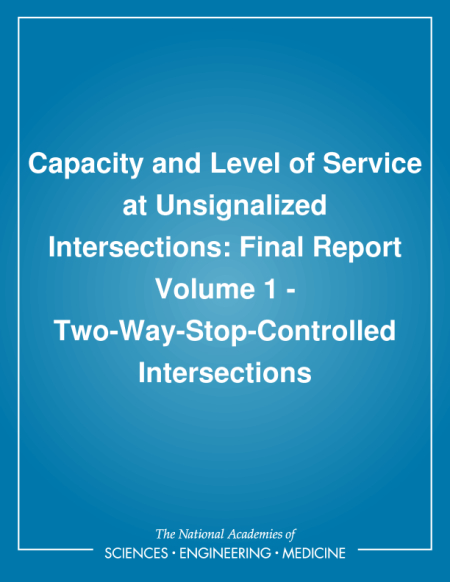