Visit NAP.edu/10766 to get more information about this book, to buy it in print, or to download it as a free PDF.
« Previous: I Introduction
Page 17 Share Cite
Suggested Citation:"II Brief Descriptions of Phenomena Important in Reduced Gravity." National Research Council. 2000. Microgravity Research in Support of Technologies for the Human Exploration and Development of Space and Planetary Bodies. Washington, DC: The National Academies Press. doi: 10.17226/9452.
×

II Brief Descriptions of Phenomena Important in Reduced Gravity Chapter III surveys a set of HEDS-enabling technologies for the purpose of identifying critical underlying physical phenomena that are affected by, or that play a dominant role in, reduced gravity. These phenomena, and the research needed to extend our knowledge of them, are discussed in Chapter IV. The purpose of Chapter II is to briefly introduce these phenomena, along with associated concepts such as scaling, so that reference to them in the following chapters will be intelligible to a wider range of readers. Because of the equivalence between force and mass times acceleration, many of the dimensionless groups used to generalize design data may be expressed as force ratios that contain gravitational acceleration. The consequences of local variations in Earth's gravitational acceleration can be accounted for easily through the scaling that is inherent in the relationships among the various dimensionless groups, and it is expected that for the gravitational accelerations that exist on the surfaces of the Moon and Mars, such known scaling laws are adequate for describing a number of phenomena. (For this reason most HEDS technology problems that need to be addressed by fundamental research on basic transport phenomena are likely to occur at near zero gravity rather than at fractional gravity levels.) As the gravitational level decreases below that of Earth, the Moon, and Mars, as may obtain in the space environment, the magnitudes of the forces associated with differences in density may become small compared with the forces associated with other phenomena, which then may become significant and even dominant. In some cases, the emergence of other phenomena is predictable as gravitational levels are reduced, while in other cases, the influence of competing phenomena may be unexpected, and the engineering systems needed for successful HEDS developments may then be compromised. There are a number of phenomena that may play a significant role in such systems. Interfacial phenomena refer to effects caused by the presence of an interface or bounding surface between two different thermodynamic phases, i.e., a solid, liquid, or gas. The defining characteristic of an interface is the work required to create a unit area of the interface, which is referred to as the free energy per unit area or (for a liquid) the surface tension of the interface. Many of the static forms assumed by liquids on a small scale reflect the tendency of the multiphase system to minimize the total interracial free energy, which in simple cases is equivalent to minimizing the total interracial area. This accounts for the spherical shape of isolated droplets and bubbles and other more complicated configurations of liquids in contact with a solid of prescribed shape, as occurs in the storage of liquid fuels. These shapes, both static and dynamic (e.g., ripples on a liquid surface), are discussed in Section IV.B. In addition, surface tension regulates wetting phenomena, as illustrated by the flow of solder on a work piece. Also, variations in surface tension over a liquid surface, arising from temperature or composition 17

18 MICROGRAVITY RESEARCH gradients, drive special flows referred to as Marangoni flows. Surface tension is not affected by gravity level, but surface tension as a driving force for the configuration and motion of liquids becomes increasingly important as the gravity level is reduced. For this reason, understanding and utilizing interracial phenomena are key to the control and management of liquids in reduced gravity. Multiphase flow, described in Section IV.C, refers to the flow of more than one fluid phase in a system of pipes, pumps, and phase-change components; an example is the flow of vapor and liquid in a power-generating system. In Earth gravity, phases tend to stratify depending on their density, with the denser phase flowing or collecting in the bottom of a pipe or component, whereas in microgravity there is no driving force for stratification. Various flow regimes occur corresponding to different configurations of the two phases, including bubbles of gas in a liquid, droplets of liquid in a gas, and the annular flow of a film of liquid along the walls of a conduit with gas and entrained liquid droplets flowing in a central core. Flow-regime-specific predictive models of multiphase flow are essential for the design of multiphase systems for operation in microgravity, including power-generating systems that depend on the flow of more than one phase, as in the case of a Rankine cycle power plant (typified by a steam power plant on Earth). Rankine-cycle-based systems are attractive because of the efficient heat transfer due to phase change during evaporation and condensation. Flow in porous media is exemplified by the movement of liquids in the wicks used in heat pipes and other thermal management devices based on capillarity, the flow of fluids in packed and fluidized beds used in chemical reactors, and the flow of nutrients and gases in soils used for plant cultivation in space. Gravity, pressure gradients, and capillarity (i.e., surface tension forces) are the primary driving forces for flow, and gravity becomes less important as it is reduced. The behavior of the flow under these conditions is poorly understood, as discussed in Section IV.C. Heat transfer refers to the flux of heat across a boundary or interface by conduction, convection, or radiation and is central to the operation of power and propulsion systems and to the management of the energy budget in a spacecraft. Of these processes, convection (with or without phase change) driven by thermally induced density differences is strongly dependent on gravity level and hence is the focus of Section IV.D. In this case, the transferred heat is conveyed to (or from) the bounding surface from (or to) another part of the system by a moving fluid or fluids. If the fluid is single-phase, as in the case of a Brayton cycle, then thermally induced buoyancy convection is diminished in reduced gravity and absent in microgravity. If the fluid is two-phase, as in the case of a Rankine cycle, then all the issues of multiphase flow and heat transfer referred to above are present. In addition, the process of heat transfer at the walls of a condenser or evaporator, where the phase change occurs, is critically affected by gravity level. In microgravity, surface tension or capillary forces play a dominant role in the degree and dynamics of the wetting of the walls by the liquid phase. In systems using multiphase flow, system effects on a global scale may emerge from the interaction among the components of the network. In particular, the phase or time lags in feedback loops can cause potentially dangerous instabilities that are only revealed by analysis of the system as a whole. These effects are discussed in Section IV.C. Solidification of a melt occurs in such processes as casting, welding, and liquid-phase sintering. It is affected by gravity level, as discussed in Section IV.E, because of buoyancy-induced convection in the liquid phase that, in turn, affects the distribution of solutes, foreign particles, and bubbles in the liquid as it freezes. This in turn affects the grain structure, porosity, and impurity distribution (i.e., the microstructure) of the solidified or cast material. The microstructure and properties of a material solidified in microgravity differ markedly from those of a material solidified in Earth gravity (Curreri and Stefanescu, 1988~. Combustion, either intentional in power-generating and propulsion systems or unintentional in accidental fires, is influenced by gravity level because of the large density differences between the ambient gas and the hot product gases. Flame structure is drastically altered from the upward convective form in Earth gravity to a quiescent spherical form controlled by diffusion in microgravity. The effects of gravity on such combustion characteristics as flammability, smoldering, and flame spread are discussed in Section IV.F. Granular mechanics includes such topics as the angle of repose of piles of granular material, the response of granular media and soils to loads and to digging, and the flow of granular materials in chutes and hoppers. Gravity affects the degree of compaction of soils and provides the driving force for flow. In addition, the behavior of 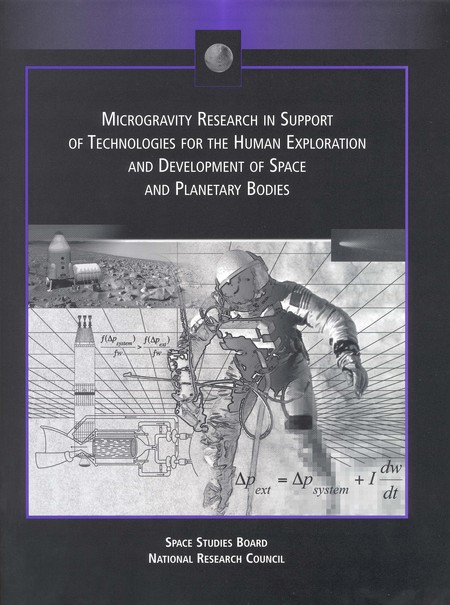