This report was supported by a grant from the National Science Foundation. The views expressed herein are those of the authors and do not necessarily reflect the views of the sponsor.

Oceanography is a relatively young branch of science. The Challenger Expedition in 1872-1876 began the exploration of the deep sea but it was during World War II that the significance of this knowledge became of national importance. The U.S. Office of Naval Research, formed soon after the war, sponsored basic research as well as work relevant to the Navy. The National Science Foundation (NSF), created in 1950, gradually augmented and diversified funding in oceanography until, now, NSF is the major federal supporter of marine science.

During the first few decades after WWII there was a tremendous efflorescence in our understanding of fundamental processes in the sea; in ocean circulation, plate tectonics, and the biochemical basis for the productivity of marine life. Oceanography expanded rapidly and then, of necessity, grew more slowly until it is now a mature discipline. So this is a very suitable point to look back at our achievements and the major role of NSF, as well as looking to the future of this field.

The United Nations declared 1998 the International Year of the Ocean and NSF, along with other federal agencies, celebrated the U.S. commitment to the oceans. As part of these activities and to commemorate, ahead of time, the NSF Fiftieth Anniversary, NSF's Division of Ocean Sciences approached the National Research Council's Ocean Studies Board (OSB) to plan and execute a symposium on Fifty Years of Ocean Discovery. The OSB formed a planning committee composed of scientists and managers who have observed NSF's role in U.S. ocean sciences from outside and inside NSF. The following members of the planning committee did a great service to the oceanography community in planning and participating in this symposium: Feenan Jennings (National Science Foundation and Texas A&M University, retired), John Knauss (University of Rhode Island), Marcia McNutt (Monterey Bay Aquarium Research Institute), Walter Munk (Scripps Institution of Oceanography), Andrew Solow (Woods Hole Oceanographic Institution), Sandra Toye (National Science Foundation, retired), Karl Turekian (Yale University), and Robert Wall (National Science Foundation and University of Maine, retired). The planning committee put together a two-and-one-half-day symposium to highlight the achievements of ocean sciences and the individuals who made the advances over the past 50 years. We emphasized the development of the institutional structures within NSF required to work successfully with the expanding ocean science community. We ensured discussion of the major issues that emerged in recent decades; especially the balance of large and small science. We wanted a glimpse into the future of ocean sciences through the ideas of the next generation.

These topics, the speakers, and a highly participatory audience of almost 400 made the symposium an exciting and enjoyable event. A poster session highlighted the history of individual institutions and some of the major ocean science programs. An exhibit of photos of marine organisms provided a backdrop for a reception at the historic National Academy of Sciences building. NSF sponsored participation in the symposium by ocean science students nominated by their institutions. There was a genuine feeling of celebration among several generations of ocean scientists coming together to discuss the past and future of our field.

This volume contains the presentations from the symposium speakers. Nearly all of them were directly involved in the events they discuss and this gives an immediacy to their stories. The appendices provide other information that we hope will serve those who delve into this period of the history of our science and NSF's role in it. We are grateful to Dr. Gary Weir and Dr. David van Keuren for checking the historical accuracy of several of the historical papers from the first day of the symposium. Videotapes of the symposium are also available from the National Science Foundation and the Ocean Studies Board. On behalf of the planning committee, I wish to express our appreciation for NSF's sponsorship of this activity, and thank the OSB staff, especially Ed Urban and Ann Carlisle, for all their work. Above all we are grateful to the many individuals who took such a full part in this event and made it a very memorable occasion. 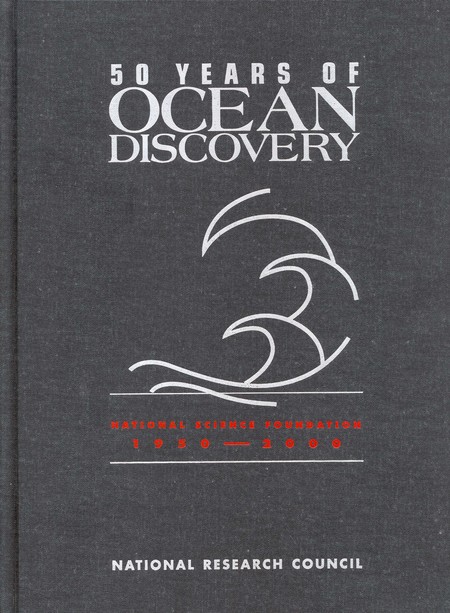 This book describes the development of ocean sciences over the past 50 years, highlighting the contributions of the National Science Foundation (NSF) to the field's progress. Many of the individuals who participated in the exciting discoveries in biological oceanography, chemical oceanography, physical oceanography, and marine geology and geophysics describe in the book how the discoveries were made possible by combinations of insightful individuals, new technology, and in some cases, serendipity.

In addition to describing the advance of ocean science, the book examines the institutional structures and technology that made the advances possible and presents visions of the field's future. This book is the first-ever documentation of the history of NSF's Division of Ocean Sciences, how the structure of the division evolved to its present form, and the individuals who have been responsible for ocean sciences at NSF as "rotators" and career staff over the past 50 years.