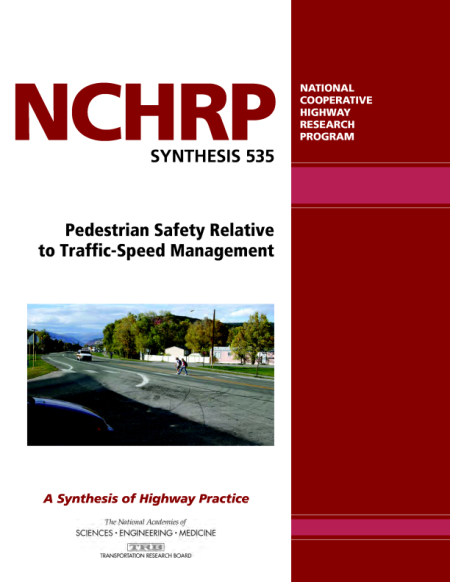 Measures that are effective at reducing speed, such as speed humps and mini traffic circles, are sometimes used in low-speed areas such as school zones. But they are often not recommended or allowed (via local policy) on the higher-speed streets typically associated with the highest injury severity for pedestrians.

For those higher-speed streets, redesigning them to communicate lower speed, such as through a roadway-reconfiguration effort, can effectively accomplish the goal of lowering speed. In the absence of street redesign, however, another effective current solution is enforcement, and particularly automated speed enforcement (ASE) that frees police to focus on other issues and that is free from implicit or explicit bias. It is important to carefully consider community context when selecting locations to employ ASE, to avoid disproportionately burdening any historically disadvantaged communities that surround the typically high-speed streets that need to be addressed.

The TRB National Cooperative Highway Research Program's NCHRP Synthesis 535: Pedestrian Safety Relative to Traffic-Speed Management aims to document what is known about strategies and countermeasures to address pedestrian safety via traffic-speed management in urban environments. For example, the City of San Francisco regularly uses curb extensions as traffic-calming devices on its streets. However, the political and land use context of each city heavily influences the types of treatments that are considered feasible for each city. Thus, the City of Los Angeles has had to find alternatives to both ASE and road diets, the latter of which have been the subject of intense public backlash in some cases.

These realities—that speed management can be fraught with difficulty—have spurred creative thinking about how to work within contextual confines, resulting in some particularly noteworthy and promising practices. For example, the City of Nashville anticipated potential backlash against speed-management efforts and thus chose to work with advocacy groups to identify areas of the city desiring walkability improvements. By installing walkability improvements in those areas first, city leaders created instant wins that could be used as leverage for future projects.

The authors of the synthesis found there may be a need for greater clarity about the speed-limit-setting process, as well as for greater collaboration between local and state agencies when state roads run through urban areas. In particular, it may be worth exploring whether there is a need for a framework that will foster collaboration between local and state staff on safety initiatives such as achieving flexibility in roadway design, changing laws or regulations that govern speed-limit setting, and finding a balance between local safety needs and regional mobility needs. Such a framework may support both local and state agencies attempting to address safety issues and reach larger goals as articulated through movements like Vision Zero.