Proceedings of the International Conference on Scientific Information: Two Volumes (1959)

Chapter:How Scientists Actually Learn of Work Important to Them

Get This Book
Visit NAP.edu/10766 to get more information about this book, to buy it in print, or to download it as a free PDF.
« Previous: Systematically Ascertaining Requirements of Scientists for Information
Page 195 Share Cite
Suggested Citation:"How Scientists Actually Learn of Work Important to Them." National Research Council. 1959. Proceedings of the International Conference on Scientific Information: Two Volumes. Washington, DC: The National Academies Press. doi: 10.17226/10866.
×

How Scientists Actually Learn of Work Important to Them

In the light of the very large sums of money—to say nothing of the time and skilled labor—expended annually on the indexing and abstracting of the scientific literature and on the development of new methods of recording and retrieving information, it seemed desirable to examine the actual ways in which representative scientists in practice find out about the existence of scientific work that is crucial to the development of their own research. The method we used was simple in the extreme. In individual interviews each scientist was asked to select a recent, significant paper from his own list of publications. From the references given in this paper he was then asked to choose up to five or six items representing scientific concepts and research of major or crucial significance to the development of his own work reported in the chosen paper. This done, the scientist was asked two questions: (1) How did you first learn of the existence of the work reported in each of the selected items? (2) Would it have made any significant difference to the progress of your own work had you learned of it sooner than you did? The first question was accompanied by an enumeration of the various ways in which experience soon showed the investigators had actually discovered work of importance to them (e.g., in casual conversation; from a formal report at a meeting; in a journal subscribed to by the investigator; in a journal regularly scanned in the library; in an abstracting service; in an indexing service; through a reprint received in exchange; from a reference book; from a review article on the subject; from a cross citation in some other article; in a formal discussion group; from a bibliography; or from a co-worker in the same laboratory.

The interviews elicited a vigorous response. Many of the investigators volunteered comments on the general problem of keeping up with the literature and on their personal methods of trying to cope with it. Fifty scientists were interviewed, representing a variety of fields, although concentrated in the bio-

logical sciences. There were 10 animal and human physiologists, 2 plant physiologists, 5 biophysicists, 8 biochemists, 2 organic chemists, 6 cytogeneticists and geneticists, 3 embryologists, 1 microbiologist, 1 physical anthropologist, 1 parasitologist, 6 psychologists, 1 oceanographer, 1 geologist, 2 sanitary engineers, and 1 radio engineer. The number of items from the literature on which they reported totaled 346. When the results were tabulated, rather striking differences were apparent between the workers in different fields. However, since the sample is too small for a really adequate representation of any single group, only the total for the entire sample will be presented. Even so, no positive conclusions should be drawn. The survey is presented merely as a pilot study in order to indicate a method for obtaining information about the actual methods employed by university scientists in their efforts to keep up with the progress of their own fields. The results, ranked in order of frequency, are given in Table 1.

It may be of some significance that the animal physiologists and biophysicists never referred to cross citations as valuable to them; the biochemists never reported discoveries in journals they regularly subscribe to (one wonders why?); the biophysicists, embryologists, and geneticists almost without exception eschew abstracting services; and the biophysicists and psychologists fail to use reprints.

Little weight can be placed upon the answers to the second question. However, 34 of the 50 scientists interviewed gave “No” as their answer for all their references, when asked whether it would have made a significant difference to

the progress of their own work had they known of the related work sooner; and 9 answered “yes” at least once. A more extensive study of this relationship appears desirable.

The comments made by the scientists who were interviewed contrasted considerably with the data they provided. Many of them spoke of the importance of abstracts, the use they made of them, and the need for a better coverage of the literature and prompter publication. The data show that for this group of scientists abstracts were not often of primary importance. On the contrary, the most striking fact is unquestionably the very heavy reliance by most workers, and in nearly every field checked, on verbal communication with scientists working in the same area. It is not clear how this could apply to foreign work and workers, and it may therefore indicate a growing tendency to provincialism on the part of the scientists of the United States. In any future study of this sort, it would be valuable to have a breakdown of the distribution of items according to native country, foreign country of same language, and foreign country of different language; and to check this distribution against estimates of the amount of work being done in each field in the United States and abroad.

Dependence upon the memory of the scientists interviewed constitutes a flaw in the present procedure. In any future analysis of like nature the subjects might well be notified of the project in advance and asked to keep a record of how they learn about papers important to their own work, for the next 50 such items.

An extension of the study to include a larger and more representative group of American scientists would seem worthwhile, and if a group of European or other foreign scientists could be made the subjects of a similar survey, the international comparison would be very interesting. 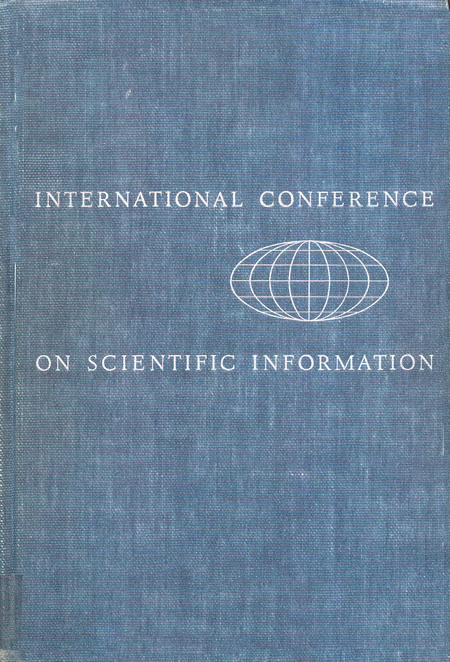 The launch of Sputnik caused a flurry of governmental activity in science information. The 1958 International Conference on Scientific Information (ICSI) was held in Washington from Nov. 16-21, 1958 and sponsored by NSF, NAS, and American Documentation Institute, the predecessor to the American Society for Information Science. In 1959, 20,000 copies of the two volume proceedings were published by NAS and included 75 papers (1600 pages) by dozens of pioneers from seven areas such as:

It is now an out of print classic in the field of science information studies.