Get This Book
Visit NAP.edu/10766 to get more information about this book, to buy it in print, or to download it as a free PDF.
« Previous: Summary
Page 15 Share Cite
Suggested Citation:"1 Introduction." Institute of Medicine. 2010. Front-of-Package Nutrition Rating Systems and Symbols: Phase I Report. Washington, DC: The National Academies Press. doi: 10.17226/12957.
×

Food packages have long included nutrition messages to consumers, whether to provide the consumer with nutrition information or to help market food products. The Nutrition Labeling and Education Act of 1990 amended the Federal Food, Drug, and Cosmetic Act to require that labels of most packaged food products regulated by the Food and Drug Administration (FDA) include a standardized nutrition label on which manufacturers are required to disclose certain nutrition information; that nutrient content claims be made only if the claims have been defined in regulations; and that health claims be used only in accordance with regulations.1 While the statute does not apply to the labeling of meat and poultry regulated by the Food Safety and Inspection Service (FSIS) of the U.S. Department of Agriculture (USDA), that agency issued regulations that parallel, to the extent possible, FDA’s nutrition labeling regulations.2 Increasingly, however, unregulated nutrition information and symbols have been placed onto the front of food packages. The incorporation of these nutrition messages and symbols raised questions about reliable sources of information to guide product selection. In response, food manufacturers, health organizations, and others have developed systems and symbols for the front of the package (FOP or front of pack) with the intent of helping the consumer make healthier choices, ideally in the context of healthy diets. The end result, however, has been increasing concern from critics and the media that consumers are becoming confused as the number of systems and symbols has proliferated, each using different and often conflicting criteria.

FOP labeling has the potential to provide useful information to consumers. If standardized in an easy-to-read format and focused on critical information, it could provide a convenient educational tool to help consumers make healthful choices. In addition, having key nutrition information displayed prominently on the front of food packages could encourage manufacturers to reformulate products. Recognizing this, FDA of the Department of Health and Human Services and USDA have begun work on developing a voluntary FOP nutrition label that is “driven by sound nutrition criteria, consumer research, and design expertise.”3 Their stated goal for an FOP system is “to increase the proportion of consumers who readily notice, understand, and use the available information to make more nutritious choices for themselves and their families, and thereby prevent or reduce obesity and other diet-related chronic disease.”

THE CHARGE TO THE COMMITTEE AND THE STUDY PROCESS

As a step toward determining how FOP systems should be used in the future, in FY 2009 the Congress directed the Centers for Disease Control and Prevention (CDC) to undertake a study with the Institute of Medicine (IOM) that would examine and provide recommendations regarding FOP nutrition rating systems and symbols.4 In FY2010 the Congress directed the CDC to continue the study.5 The first phase of the study, described in this report, was undertaken with support from CDC and FDA. An ad hoc committee was convened to review systems being used by manufacturers, supermarkets, health organizations, and governments in the United States and abroad and the overall merits of front-label nutrition icons, the advantages and disadvantages of various approaches, and the potential benefits of a single, standardized front label food guidance system regulated by the Food and Drug Administration. The charge to the committee was directed to FOP nutrition rating systems and symbols on labels of FDA-regulated food products. The committee recognizes that FSIS has responsibility for labels on packaged meat and poultry products using a prior label approval process. While the emphasis in this report is on FDA-regulated foods, the committee anticipates that its conclusions also will be pertinent to food products regulated by USDA.

In accordance with the IOM committee process, a committee was appointed to undertake the study. The statement of task for the study is in Box 1-1. A second phase, begun in September 2010, will draw from the Phase I report and consider (1) which icons are most effective with consumer audiences, (2) systems and icons that best promote health and how to maximize their use, and (3) the potential benefits of a single, standardized front-label food guidance system regulated by the FDA.

The members of the Phase I committee had expertise in the areas of nutrition sciences, dietary assessment and dietary reference intakes, nutrition and health communication, consumer education, and nutrition labeling. Biographical sketches of the committee are in Appendix E.

In accordance with the IOM’s contractual agreements with the sponsors, the committee met over a seven-month period for this first-phase activity to consider its scope of work, review the nutrition science behind FOP systems, and develop its findings and conclusions. Four in-person meetings were held, along with several committee conference calls. One meeting included a public workshop to which experts on FOP systems were invited to make presentations and discuss topics of relevance. A public comment period was held during the workshop, and interested individuals and organizations were invited to present both oral and written comments to the committee. Questions posed to developers and administrators of a number of FOP systems during preparations for and as part of the Phase I public workshop are shown in Box 1-2. The names of workshop speakers and their presentation topics can be found in Appendix D.

In addressing its task, the committee reviewed a number of publicly available materials including journal articles and reports related to nutrition labeling and FOP rating systems and symbols; materials submitted to the committee’s public access file; and information on existing systems from system websites, promotional materials, and public statements. The committee also reviewed the detailed algorithms of the Guiding Stars and NuVal rating systems, which are considered proprietary by Guiding Stars and NuVal. Finally, the committee gained additional insights on the development of certain existing programs during phone conversations between a few committee members and FOP system developers and administrators that were held in preparation for the public workshop. The process of identifying the systems to review began with internet searches using search terms including, but not limited to, “front-of-pack label,” “nutrition rating system,” “front panel symbol/system,” and “shelf tag system/symbols.” It was augmented by suggestions from committee members and others and grocery store visits to search for existing systems. The process found a number of systems from the United States and abroad. As details of systems were examined, the committee found that the systems fell into three distinct categories. The 20 systems highlighted in this report represent the varied systems both nationally and abroad. The committee found that differences in types began to diminish as additional systems were evaluated, providing little or no new information to be gained. The committee did not undertake original research. For simplicity, sources for each system’s nutrient criteria are listed at the beginning of Appendix C.

The charge to the committee included the task to consider the advantages and disadvantages of various approaches for adults and children. However, the committee decided that from a nutritional perspective, the same overall nutritional approach applied to children and adults (Conclusion 1). Thus, it did not consider children and adults separately. This perspective is reinforced by the historical focus of the Dietary Guidelines for Americans on recommendations for a general population 2 years and over and the Nutrition Facts panel oriented to nutritional needs for the general population 4 years and above. The committee will explore consumer behavior issues related to children in the second phase (see Chapter 7 for a description of Phase II activities).

Once the committee completed its initial draft report, external reviewers approved by the IOM and the National Research Council individually reviewed the draft report. These reviewers remained anonymous until the report was finalized. The review process is intended to ensure that the report addresses the committee’s charge, that the conclusions are based on scientific evidence, and that the report is presented in an effective and impartial manner.

Upon completion of this first phase of this study, the focus of the study will shift to a greater emphasis on understanding which symbols are most effective with consumers. The intention is that the nutritional considerations of the first phase will contribute toward the exploration of consumer perceptions, practices, and behavior in the

second phase, and a number of questions to be addressed have been raised by the committee. These are described in Chapter 7.

FOP nutrition rating systems, for the purpose of this report, include systems and symbols which indicate energy content or that state that a product meets system-specific criteria either for nutrients to limit or nutrients to encourage or both. While symbols are most often placed on the front, they may also be found on the side, top, or back panels of food packages or displayed on shelf tags in food retail stores.

This report is organized as follows: Chapter 1 provides an introduction to the work of the committee. Chapter 2 offers a history of nutrition labeling, and Chapter 3 discusses the emergence of FOP systems. Chapter 4 provides an overview of health and diet in the United States. Chapter 5 discusses the purpose and merits of FOP systems. Chapter 6 presents the committee’s review of important scientific issues with implications for FOP nutrition rating systems and symbols and also identifies various system strengths and limitations. Chapter 7 presents the committee’s conclusions. Five appendixes provide additional information for the reader. Appendix A provides a glossary as well as an extensive list of abbreviations and acronyms. Appendix B includes requirements for most FDA-regulated nutrient content claims. Appendix C contains sample product evaluations drawn on in Chapter 6. Appendix D provides the workshop program, and Appendix E is the committee biographical sketches.

Next: 2 History of Nutrition Labeling »
Front-of-Package Nutrition Rating Systems and Symbols: Phase I Report Get This Book
× 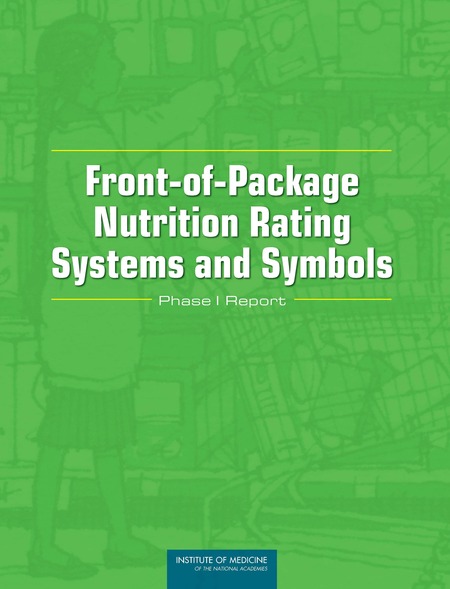 The federal government requires that most packaged foods carry a standardized label--the Nutrition Facts panel--that provides nutrition information intended to help consumers make healthful choices. In recent years, manufacturers have begun to include additional nutrition messages on their food packages. These messages are commonly referred to as 'front-of-package' (FOP) labeling. As FOP labeling has multiplied, it has become easy for consumers to be confused about critical nutrition information. In considering how FOP labeling should be used as a nutrition education tool in the future, Congress directed the Centers for Disease Control and Prevention to undertake a two-phase study with the IOM on FOP nutrition rating systems and nutrition-related symbols. The Food and Drug Administration is also a sponsor.

In Phase 1 of its study, the IOM reviewed current systems and examined the strength and limitations of the nutrition criteria that underlie them. The IOM concludes that it would be useful for FOP labeling to display calorie information and serving sizes in familiar household measures. In addition, as FOP systems may have the greatest benefit if the nutrients displayed are limited to those most closely related to prominent health conditions, FOP labeling should provide information on saturated fats, trans fats, and sodium.