Visit NAP.edu/10766 to get more information about this book, to buy it in print, or to download it as a free PDF.
« Previous: Summary
Page 4 Share
Suggested Citation:"Chapter 1 - Introduction." National Academies of Sciences, Engineering, and Medicine. 2022. Uses of Social Media in Public Transportation. Washington, DC: The National Academies Press. doi: 10.17226/26451.
×

4 Background Social media platforms include various web-based applications that are accessible via the Internet using a web browser or smartphone apps. People use these social media platforms to interact with one another online. Many transportation agencies have begun to integrate social media use into their marketing and communications strategies. While the goals vary, the agen- cies generally use social media to reach out to potential riders, communicate with current riders, strengthen community connections, and promote the agencyâs branding and messaging. Some agencies also use social media to assist with customer service and gather feedback about pro- grams and services from stakeholders. The previous synthesis report, TCRP Synthesis 99: Uses of Social Media in Public Transpor- tation, provided valuable insights but is a decade old (Bregman 2012). There have been many changes in the social media platforms since the publication of the previous synthesis. For example, some older social media platforms (e.g., Klout) were shut down, and there has been an emergence of many new platforms (e.g., TikTok, WeChat, and Telegram). Additionally, there has been rapid growth of smartphone ownership in recent years. Because there have been drastic changes in the social media landscape, this synthesis aims to determine the current impact of social media uses by transit agencies. Objective and Scope The goal of this synthesis study is to provide relevant information about the current state of the practice in transit agencies to explore social media interaction. This report summarizes the reasons why agencies use social media, including public education and awareness, public engagement, quick updates, and crisis information; support of and influence on organiza- tional goals; and promotion of transit. The synthesis report also explores the following: which social media platforms are used and how; the applications and metrics used by agencies; measurements of social media effectiveness; guidance on policies, procedures, and processes for social media interactions and usage; strategies and tactics used to reach audiences; agency branding; and the resources allocated to agenciesâ social media efforts. Technical Approach to Project Study The study was conducted in three major phases: a literature review of existing research and transit agency examples related to social media usage patterns, an online survey targeted toward transit agencies, and in-depth case examples of selected transit agencies that responded to the survey. C H A P T E R 1 Introduction

Introduction 5Â Â  Literature Review First, the study team conducted a review of the relevant literature, including previous research and transit agency examples of active social media usage. The study team focused on social media platforms, usage patterns, public education and engagement, and information collection to improve transit services. The scan searched through academic sources and reports as well as regular search engines using keywords relevant to the study topics. Survey of North American Transit Agencies Second, the study team developed a list of North American transit agencies with the relevant information found in the literature review on social media usage. The study team developed a survey questionnaire to learn more about agency practices in social media usage. The survey was structured into the following sections: social media platforms, agency considerations, challenges and barriers, lessons learned, and future needs. This survey had conditional logic built in to allow agencies to skip over nonapplicable questions. AppendixÂ B of this report contains the final survey questionnaire. The study team developed a list of 75 transit agencies as the potential survey participants. The request to complete the survey was sent to the selected transit agencies. Out of the acquired 60Â responses, 13 responses were discarded because of incomplete submission. For the final survey analysis, 47 complete responses (from 46 transit agencies) were used. Figure 1 provides a map of the transit agencies (Halifax, Canada, is not shown) that completed the survey and participated in the case examples. Case examples Participating agencies Figure 1. Locations of survey respondent agencies except for Halifax, Canada.

Introduction 7Â Â  identified for further study needed on customer engagement via social media platforms used by transit agencies. â¢ Glossary of Terms is provided because social-media-related studies contain many new and innovative terms and platforms. â¢ References provides a list of sources cited. â¢ Abbreviations and Acronyms is a list to orient the reader to abbreviations and acronyms used in the report. â¢ In the appendices, AppendixÂ A lists the name and relevant information of the participant agencies. AppendixÂ B provides the survey questionnaire. AppendixÂ C provides the responses of all survey questions in the form of tables and figures, and AppendixÂ D documents useful social media metrics for the case example transit agencies.

Next: Chapter 2 - Literature Review »
Uses of Social Media in Public Transportation Get This Book
× 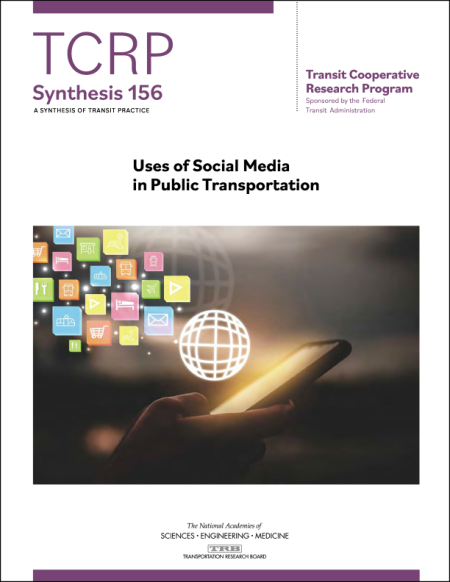