While chlorine gas inhalation has previously been reported to cause temporary mucous membrane irritation, acute pneumonitis, pulmonary edema, and transient bronchospasm, there is controversy about the existence of long-term pulmonary sequelae. We report the case of a 25-year-old man in whom chronic, recurrent asthma developed after exposure to a chlorine gas leak in an enclosed space. His course since the exposure has been notable for frequent exacerbations necessitating chronic corticosteroid therapy and multiple hospitalizations. To our knowledge, the persistence of symptoms years after the exposure is unique in the literature. (Chest 1991; 100:855–56)

Chlorine is widely used in water purification and in the manufacture of plastics, bleaches, and alkalis. Although its pungent odor is detected in concentrations as low as 0.5 ppm, it causes respiratory damage only at levels above 20 ppm. Discovery of the highly toxic effects of chlorine gas on the human respiratory tract resulted in its deployment as the first chemical weapon at Ypres, France, in 1915. Despite extensive study since that time, controversy still exists about long-term pulmonary sequelae after acute chlorine-induced lung injury. We report a unique case of severe, chronic asthma following acute exposure to chlorine gas.

A 25-year-old man came to the Hahnemann University Hospital Emergency Room with severe dyspnea. He had a history of mild childhood asthma, which had resolved at the age of 5 years. Four years prior to admission, the patient was exposed to a chlorine gas leak while working for a regional sewerage authority. The patient had worked for 2 h in a chlorine-filled enclosed environment without a protective respirator mask. Immediately following this exposure, the patient experienced a transient episode of hemoptysis followed by acute shortness of breath and wheezing. A regimen of aminophylline and inhaled beta-agonists was started in a local emergency

room, which resulted in some improvement in his symptoms. His course over the next 4 years was notable for frequent hospitalizations for asthma and increasing use of oral and inhaled corticosteroids. He was admitted to Hahnemann University Hospital for management of an acute exacerbation of his illness and a diagnostic workup.

An arterial blood gas evaluation on room air revealed a pH of 7.45, a Pco2 of 32.2, and a Po2 of 73.6. The eosinophil count was 8 cu mm; the immunoglobulin G activity was markedly elevated at 431 U/ml (normal, <122 U/ml). A chest roentgenogram was normal except for minimal peribronchial thickening. An esophagram demonstrated minimal gastroesophageal reflux without aspiration. An Aspergillus skin test was negative. A flow volume loop and otorhinolaryngologic evaluation showed no evidence of upper airway obstruction. Pulmonary function testing revealed an FVC of 2.71 (52 percent of the predicted value [PV]), an FEV1 of 1.42 (35 percent of PV), an FEV1/FVC of 52 percent, an FRC of 5.09 (154 percent of PV), and a TLC of 7.43 (107 percent of PV)—values consistent with severe obstruction (normal values from Crapo et al1). Administration of aerosolized albuterol produced a 54 percent improvement in FEV1 and a 26 percent improvement in FVC, which was reproduced in multiple studies. The single breath diffusion capacity for carbon monoxide was 31.95 (89 percent).

Intravenous methylprednisolone, intravenous aminophylline, and aerosolized terbutaline were given with significant improvement in the patients symptoms and flow rates, although moderate obstruction remained. After several days, the patient was discharged on a regimen of high-dose oral corticosteroids with persistent airflow obstruction.

Although today most reported cases of chlorine exposure occur in industrial settings,2,3 at water treatment facilities,4 or as a result of transportation accidents,5,6 several cases of toxic chlorine inhalation have occurred in more unusual circumstances. An increasingly common source of exposure to chlorine gas is fumes liberated from chlorine products used in residential pools and spas.7,8 Cases of exposure resulting from chlorine gas released during mixing of a variety of household cleaning agents9 have prompted the placement of consumer warnings on many such products. One episode of voluntary exposure has also been reported.10

The long-term pulmonary sequelae of chlorine gas inhalation are controversial. Studies of soldiers gassed during the First World War showed evidence of obstructive airway disease and permanent disability.6,11 It is difficult to ascribe abnormalities found in these patients solely to chlorine inhalation for two reasons: chlorine was used only for a short time in chemical warfare, and most subjects studied were exposed to multiple war gases.12 More recent series describe an initial obstructive defect, often with partial reversibility3,13,14; restrictive defects with accompanying diffusion abnormalities have also been reported.7,14 These initial changes reverted to normal within a few months in almost all patients studied. In fact, in a study involving 820 patients, Jones15 found no radiologic or clinical evidence of permanent pulmonary damage following industrial chloride exposure. Lawson16 also found no long-term residual changes in laboratory parameters, chest roentgenographic findings, or pulmonary function test results in over 457 cases of acute industrial chlorine gas exposure. In contrast, Kaufman and Burkons12 found persistent obstructive lung disease up to 14 months following chronic chlorine exposure, and Kowitz et al5 found persistent residual restrictive disease and low diffusing capacities up to 3 years following acute chlorine exposure. In another study, Jones et al6 found that long-term sequelae after acute chlorine gas exposure were affected more by cigarette smoking than by the

Our patient was exposed to chlorine gas in an industrial setting. Although the patient had a history of cigarette smoking and childhood asthma, he had had no symptoms of reactive airways disease for 20 years prior to this event. Following the chlorine exposure, the patients symptoms rapidly became severely debilitating, necessitating daily therapy with high-dose corticosteroids, frequent use of home oxygen, and self-administered subcutaneous epinephrine.

To our knowledge, this case is unique in the literature. Charan et al3 showed reversible acute airway obstruction shortly after exposure, and Hasan et al13 reported the cases of two asthmatic patients in whom chlorine gas may have exacerbated a state of underlying hyperactivity. No one, however, has reported new onset of severe reversible airway obstruction that persisted several years after chlorine gas exposure. Thus, we believe that our patient represents a unique case of persistently debilitating asthma following acute chlorine gas exposure.

ACKNOWLEDGMENT: Editorial services were provided by Bette R.Haitsch. The authors would like to thank Angela K.Dorman for her assistance in manuscript preparation. 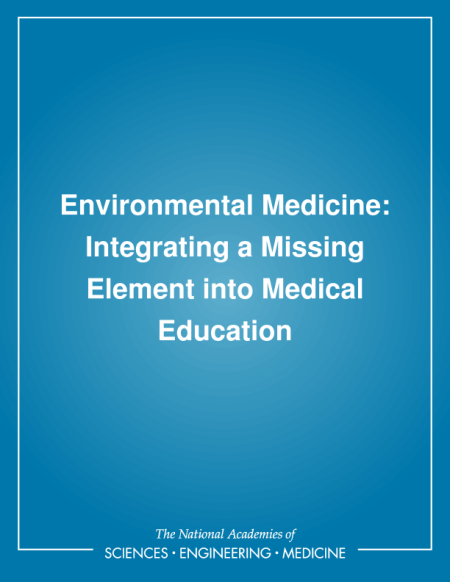 People are increasingly concerned about potential environmental health hazards and often ask their physicians questions such as: "Is the tap water safe to drink?" "Is it safe to live near power lines?" Unfortunately, physicians often lack the information and training related to environmental health risks needed to answer such questions. This book discusses six competency based learning objectives for all medical school students, discusses the relevance of environmental health to specific courses and clerkships, and demonstrates how to integrate environmental health into the curriculum through published case studies, some of which are included in one of the book's three appendices. Also included is a guide on where to obtain additional information for treatment, referral, and follow-up for diseases with possible environmental and/or occupational origins.