Get This Book
Visit NAP.edu/10766 to get more information about this book, to buy it in print, or to download it as a free PDF.
« Previous: FRONT MATTER
Page 1 Share Cite
Suggested Citation:"EXECUTIVE SUMMARY." National Research Council. 1994. GOALS (Global Ocean-Atmosphere-Land System) for Predicting Seasonal-to-Interannual Climate: A Program of Observation, Modeling, and Analysis. Washington, DC: The National Academies Press. doi: 10.17226/4811.
×

This report presents a strategy for improving the understanding and prediction of climate variations on seasonal-to-interannual time scales. It proposes the launching of a new program called Global Ocean–Atmosphere–Land System—or GOALS—to build on the successes of the Tropical Ocean and Global Atmosphere (TOGA) program by broadening the geographic scope from the tropical Pacific to the global tropics and eventually to the entire globe. The 10-year TOGA program focused on understanding the coupled atmosphere–ocean system and the interaction between the tropical oceans and the atmosphere, typified by the El Niño/Southern Oscillation (ENSO) phenomenon.

Even modest improvements in climate prediction at seasonal-to-interannual time scales would be of great social and economic benefit. The new capability of making tropical climate predictions a year or so in advance developed during TOGA is already proving valuable to the countries surrounding the tropical Pacific. The proposed program will require consideration on a global basis of the low-frequency variability of the atmosphere and its modification by global sea-surface temperature (SST); time-varying land moisture and vegetation in the tropics; and the effects of land, snow and sea-ice cover.

The ultimate scientific objectives of the GOALS program would be to:

The focus of the GOALS program is an assessment of the global interannual climate variation that can be understood, simulated, and predicted. The central hypothesis of the program is that variations in the upper ocean (including SST), soil moisture, sea ice, and snow, exert a significant influence on seasonal-to-interannual variations of atmospheric circulation and thus, the predictability of the circulation. Hence, both understanding variability and predicting climate at seasonal-to-interannual time scales will require accurate measurements of global surface and upper-ocean conditions as well as improved models to simulate their future evolution.

The GOALS program would be a phased project, expanding first into the global tropics (TOGA focused on the tropical Pacific). This expansion would be based on the hypothesis that the key to understanding and predicting seasonal-to-interannual variations is understanding and modeling the processes that determine variations in the locations, interactions, and effects of the major thermal sources and sinks for the atmosphere. Subsequent expansion to higher latitudes would be guided by the insights from empirical studies, modeling studies, and observations concerning seasonal-to-interannual variability in the extratropical atmosphere, upper ocean, and land surface.

The GOALS program is proposed for the period 1995–2010. Following the successful example of the TOGA program, it would have four major program elements: modeling, observations, empirical studies, and process studies. The success of the program would be measured by enhanced understanding of global climate variability and predictability on seasonal-to-interannual time scales, by the effectiveness of the observing system it developed for describing and predicting the climate system, by the increased ability to model the processes critical to seasonal-to-interannual variations, and by the skill developed in predicting these seasonal-to-interannual climate variations.

It is proposed that the GOALS program be an important component of the Climate Variability and Predictability (CLIVAR) program, which is a broader new initiative of the World Climate Research Program (WCRP) addressing the variability and predictability of the coupled climate system. The long-term success of GOALS depends on the development of collaborative partnerships with other WCRP initiatives, including the Global Energy and Water Cycle Experiment (GEWEX) and the World Ocean Circulation Experiment (WOCE).

Next: 1 INTRODUCTION »
GOALS (Global Ocean-Atmosphere-Land System) for Predicting Seasonal-to-Interannual Climate: A Program of Observation, Modeling, and Analysis Get This Book
× 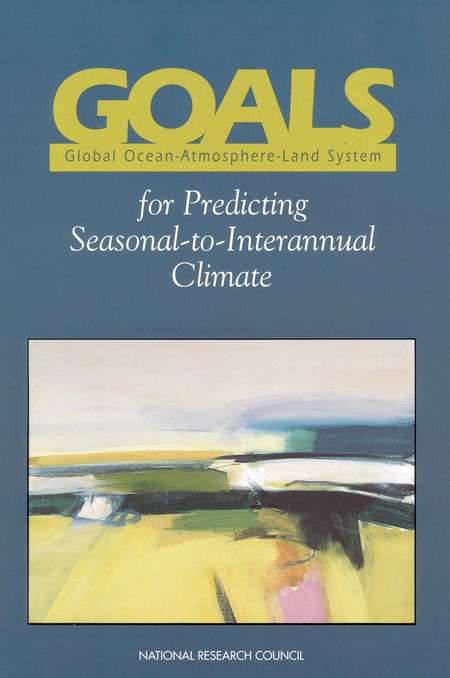 This book lays out a science plan for a major, international, 15-year research program. The past 10 years have seen significant progress in studies of short-term climate variations, in particular for the region of the tropical Pacific Ocean and the El Nino/Southern Oscillation phenomenon. Some forecast skill with lead times as long as a year in advance has already been developed and put to use. The GOALS program plans to capitalize on this progress by expanding efforts on observations and seasonal-to-interannual predictions to the remainder of the tropics and to higher latitudes.