Language and Machines: Computers in Translation and Linguistics (1966)

Visit NAP.edu/10766 to get more information about this book, to buy it in print, or to download it as a free PDF.
Page i Share Cite
Suggested Citation:"Front Matter." National Research Council. 1966. Language and Machines: Computers in Translation and Linguistics. Washington, DC: The National Academies Press. doi: 10.17226/9547.
×

'I 'l Dear Dr. Seitz: August20,1965 In April of 1964 you formed an Automatic Language Processing Advisory Committee at the request of Dr. Leland Haworth, Director of the National Science Foundation, to advise the Department of Defense, the Central Intelligence Agency, and the National Science Foundation on research and development in the general field of mechanical translation of foreign languages. We quickly found that you were correct in stating that there are many strongly held but often conflicting opinions about the promise of machine translation and about what the most fruitful steps are that should be taken now. In order to reach reasonable conclusions and to offer sensible advice we have found it necessary to learn from experts in a wide variety of fields (their names are listed in Appendix 20~. We have informed ourselves concerning the needs for translation, considered the evaluation of translations, and compared the capabilities of machines and human beings in translation and in other language processing functions. We found that what we heard led us all to the same conclusions, and the report which we are submitting herewith states our common views and recommendations. We believe that these can form the basis for useful changes in the support of research aimed at an in- creased understanding of a vitally important phenomenonlanguage, and development aimed at improved human translation, with an appropriate use of machine aids. We are sorry that other obligations made it necessary for Charles F. Hockett, one of the original members of the Committee, to resign before the writing of our report. He nonetheless made valuable contributions to our work, which we wish to acknowledge. Sincerely yours, J. R. Pierce, Chairman Automatic Language Processing Advisory Committee Dr. Frederick Seitz, President National Academy of Sciences 2101 Constitution Avenue Washington, D .C . 2 0418

Ply 27, 1966 Dear Dr. Seitz: In connection with the report of the topic Language Pro- cessing Advisory Committee, Nabona1 Research Councit which Ads reviewed by the Committee on Science and PubUc Policy on Parch 13, John R. Pierce, the chairman, Ads asked to prepare ~ brief statement of the support needs for computationa1 Un~istics, as distinct from automatic lounge translation. This retest was prompted by ~ fear that the committee report' read in isolation, might result in termination of research support for computation~1 Un~istics as well as in the recommended reduction of support aimed ~ relatively short-term goals in translation. Dr. Piercels recommendation states in part as follows: Ibe computer has opened up to Un~1sts ~ boat of cballenges, Portia insights, Ed pote~i~l~ies. We believe these can be aptly compared with the challenges, problems, Ed insights of particle physics. Certainly, 1~- ~age is second to no phenomenon in importance. Ed the tools of computa- bon~1 Un~istics are considerably less costly than the ~hibiMion-volt accelerators of particle physics. Ibe new linguistics presets ~ attractive as well as ~ extremely important challenge. Ibere is every reason to believe tab facing up to this challenge will uldm~ely lead to imported contributions in many herds. ~ deeper kno~l- edge of lunate could beg: 1. To teach foreign linkages more effectively. 2. To team Eat the nature of lunate more electively. 3. To use n~ura1 linkage more electively in instruction Ed . . cow ~ nlc~lon. 4. lo enable us to engineer arti~cia1 lounges for special purposes (e.g., pilot-to-co~rol-to~er linkages). 5. To enable us to make me~in~1 psychological experiments in 1~- age use ~~ in Amen com~nic~ion Ed though Unless He know what linkage is He done know w~ He must explain. 6. To use machines as aids in tr~nsl~ion and in inkrmation retrieval. However, the state of Un~istics is such tab excelled research that bus vane in itself is essenti~1 ~ bn~istics is ultimately to make such co~r~ubon~ Cab rese~rcb must Eve use of computers. The data He must examine in order to kind out Rout linkage is over~belming both in Entry Ed in complexity Computers give promise of helping us control the problems relit to the tremendous volume of dam, and to ~ lesser extent the prob- lams of dam complexity. But He do not yet bee good, easily used, com- mon~ known methods for bang computers dew Bob lunate dam.

Therefore, among the important kinds of research that need to be done and should be supported are (1) basic developmental research in computer methods for handling language, as tools to help the linguistic scientist discover and state his generalizations, and as tools to help check proposed generalizations against data; arid (a) developmental research in methods to allow linguistic scientists to use computers to state in detail the complex kinds of theories (for example, grammars and theories of meaning) they produce, so that the theories can be checked in detail. The most reasonable government source of support for research in com- putational linguistics is the National Science Foundation. Hold much support is needed? Some of the work must be done on a rather large scale, since sn~all-scale experiments and work with miniature models of language have proved seriously deceptive in the past, and one can come to grips with real problems only above a certain scale of grammar size, dictionary size, and available corpus. We estimate that work on a reasonably large scale can be supported in one institution for $600 or $700 thousand a year. We believe that work on this scale would be justified at four or five centers. Thus, an annual ex- penditure of $2.5 to $3 million seems reasonable for research. This figure is not intended to include support of work aimed at immediate practical applications of one sort or another. This recommendation, which I understand has the endorsement of Dr. Pierce's committee, was also sent out for comment to the membership of the Committee on Science and Public Policy. While the Committee on Science and Public Policy has not considered the recommended program in computational linguistics in competition with other National Science Foundation programs, we do believe that Dr. Pierce's statement should be brought to the attention of the National Science Foundation as information necessary to put the report of the Advisory Committee in proper perspective. Sincerely yours' Harvey Brooks, Chairman Committee on Science and Public Policy Dr. Frederick Seitz, President National Academy of Sciences 2 101 Constitution Avenue Washington, D. C . 20418

In computational linguistics and automatic language translation, we are witnessing dramatic applications of computers to the advance of science and knowledge. In this report, the Automatic Language Processing Advisory Committee of the National Research Council describes the state of development of these applications. It has thus performed an invaluable service for the entire scientific community. Frederick Seitz, President . National Academy of Sciences

Preface The Department of Defense, the National Science Foundation, and the Central Intelligence Agency have supported projects in the auto- matic processing of foreign languages for about a decade; these have been primarily projects in mechanical translation. In order to provide for a coordinated federal program of research and de- velopment in this area, these three agencies established the Joint Automatic Language Processing Group (JALPG). Early in its existence JALPG recognized its need for an advisory committee that could provide directed technical assistance as well as contribute independent observations in computational linguistics, mechanical translation, and other related fields. In October 1963 the Director of the National Science Foundation, Leland J. Haworth, requested on behalf of the three agencies that the National Academy of Sciences establish such a committee. This was done, and in April 1964, with funds made available by the three agencies, the Automatic Language Processing Advisory Committee of the National Academy of SciencesNational Research Council, under the chairmanship of John R. Pierce, held its first meeting. The Committee determined that support for research in auto- matic language processing could be justified on one of two bases: (1) research in an intellectually challenging field that is broadly relevant to the mission of the supporting agency and (2) research and development with a clear promise of effecting early cost reductions, or substantially improving performance, or meeting an operational need. It is clear to the Committee that the motivation for support of much of the work in automatic language processing has been the practical aim represented in (2) above. In the light of that objective, the Committee studied the whole translation problem. This report presents the findings and recommendations of the Committee.

Next: Contents »
Language and Machines: Computers in Translation and Linguistics Get This Book
× 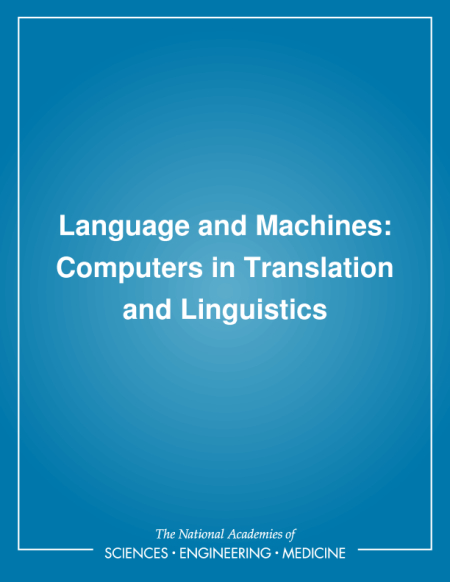