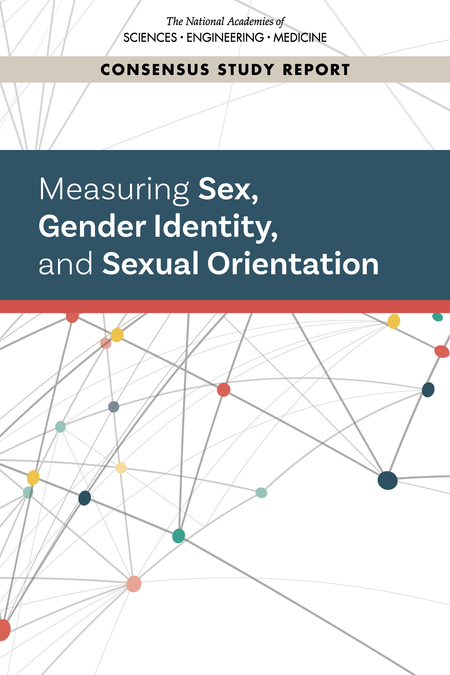 Sex, gender identity, and sexual orientation are key indicators of the demographic diversity in the United States. Sex and gender are often conflated under the assumptions that they are mutually determined and do not differ from each other; however, the growing visibility of transgender and intersex populations, as well as efforts to improve the measurement of sex and gender across many scientific fields, has demonstrated the need to reconsider how sex, gender, and the relationship between them are conceptualized. This is turn affects sexual orientation, because it is defined on the basis of the relationship between a person's own sex or gender and that of their actual or preferred partners. Sex, gender, and sexual orientation are core aspects of identity that shape opportunities, experiences with discrimination, and outcomes through the life course; therefore, it is crucial that measures of these concepts accurately capture their complexity.

Recognition of the diversity within the lesbian, gay, bisexual, transgender, queer, intersex, and other sexual and gender minorities - the LGBTQI+ population - has also led to a reexamination of how the concepts of sex, gender identity, and sexual orientation are measured. Better measurement will improve the ability to identify sexual and gender minority populations and understand the challenges they face. LGBTQI+ people continue to experience disparate and inequitable treatment, including harassment, discrimination, and violence, which in turn affects outcomes in many areas of everyday life, including health and access to health care services, economic and educational attainment, and family and social support. Though knowledge of these disparities has increased significantly over the past decade, glaring gaps remain, often driven by a lack of reliable data.

Measuring Sex, Gender Identity, and Sexual Orientation recommends that the National Institutes of Health (NIH) adopt new practices for collecting data on sex, gender, and sexual orientation - including collecting gender data by default, and not conflating gender with sex as a biological variable. The report recommends standardized language to be used in survey questions that ask about a respondent's sex, gender identity, and sexual orientation. Better measurements will improve data quality, as well as the NIH's ability to identify LGBTQI+ populations and understand the challenges they face.

Contributor(s): National Academies of Sciences, Engineering, and Medicine; Division of Behavioral and Social Sciences and Education; Committee on National Statistics; Committee on Measuring Sex, Gender Identity, and Sexual Orientation; Nancy Bates, Marshall Chin, and Tara Becker, Editors
Login or Register for a free MyNAP member account to save 10% off online and receive other benefits. [Learn More]