Visit NAP.edu/10766 to get more information about this book, to buy it in print, or to download it as a free PDF.
Page i Share Cite
Suggested Citation:"Front Matter." National Research Council. 2004. Tenth Interim Report of the Subcommittee on Acute Exposure Guideline Levels. Washington, DC: The National Academies Press. doi: 10.17226/10894.
×

ii NATIONAL ACADEMIES PRESS 500 Fifth Street, N.W. Washington, D.C. 20001 NOTICE: The project that is the subject of this report was approved by the Governing Board of the National Research Council, whose mem- bers are drawn from the councils of the National Academy of Sciences, the National Academy of Engineering, and the Institute of Medicine. The members of the committee responsible for the report were chosen for their special competences and with regard for appropriate balance. This project was supported by Contract Nos. DAMD 17-89-C-9086 and DAMD17-99-C-9049 between the National Academy of Sci- ences and the U.S. Army. Any opinions, findings, conclusions, or recommendations expressed in this publication are those of the authors(s) and do not necessarily reflect the view of the organizations or agencies that provided support for this project. Additional copies of this report are available from: The National Academies Press 500 Fifth Street, NW Box 285 Washington, DC 20055 800â624â6242 202â334â3313 (in the Washington metropolitan area) http://www.nap.edu Copyright 2004 by the National Academy of Sciences. All rights reserved. Printed in the United States of America

PREFACE ix PREFACE Extremely hazardous substances (EHSs)1 can be released accidentally as a result of chemical spills, industrial explosions, fires, or accidents involving railroad cars or trucks transporting EHSs, or intentionally through terrorist activities. Workers and residents in communities surrounding industrial facilities where EHSs are manufactured, used, or stored and in communities along the nation's railways and highways are potentially at risk of being exposed to airborne EHSs during accidental and intentional releases. Pursuant to the Superfund Amendments and Reauthorization Act of 1986, the U.S. Environmental Protection Agency (EPA) has identified approximately 400 EHSs on the basis of acute lethality data in rodents. The National Advisory Committee (NAC) on Acute Exposure Guideline Levels for Hazardous Substances has developed acute exposure guideline levels (AEGLs) for approximately 100 EHSs to date. In 1998, EPA and the U.S. Department of Defense (DOD) requested that the National Research Council (NRC) independently review the AEGLs developed by the NAC. In response to that request, the NRC organized within its Committee on Toxicology the Subcommittee on Acute Exposure Guideline Levels. The NAC's Standing Operating Procedures for Developing AEGLs for Airborne Chemicals was reviewed by the subcommittee and published in May 2001. That report provides step-by-step guidance for the derivation of AEGLs for hazardous chemicals. In December 2000, the subcommittee's first report, Acute Exposure Guideline Levels for Selected Airborne Chemicals, Volume 1, was published by the NRC; volumes 2 and 3 in that series were published in 2002 and 2003, respectively. The subcommittee meets two to three times each calendar year. At those meetings, the subcommittee hears presentations from the NAC staff and its contractorâthe Oak Ridge National Laboratoryâon draft AEGL documents. At some meetings, the subcommittee also hears presentations from NAC's collaborators from other countries, such as Germany. The subcommittee provides comments and recommendations on those documents to NAC in its interim reports, and the NAC uses those comments to make revisions. The revised reports are presented by the NAC to the subcommittee at subsequent meetings until the subcommittee concurs with the final draft documents. The revised reports are then published as appendixes in the subcommittee's reports. The present report is the subcommittee's tenth interim report. It summarizes the subcommittee's conclusions and recommendations for improving NAC's AEGL documents for 17 chemicals: Hydrazine, ethylene oxide, propylene oxide, iron pentacarbonyl, nickel carbonyl, phosphine, boron trichloride, chlorine trifluoride, dichlorodiemthyl silane, trichloromethyl silane, ethylenimine, propylenimine, allyl alcohol, aniline, arsine, monomethylhydrazine, and dimethylhydrazine. This report has been reviewed in draft form by individuals chosen for their diverse perspectives and technical expertise, in accordance with procedures approved by the NRC's Report Review Committee. The purpose of this independent review is to provide candid and 1As defined pursuant to the Superfund Amendments and Reauthorization Act of 1986.

PREFACE x critical comments that will assist the institution in making its published report as sound as possible and to ensure that the report meets institutional standards for objectivity, evidence, and responsiveness to the study charge. The review comments and draft manuscript remain confidential to protect the integrity of the deliberative process. We wish to thank the following individuals for their review of this report: Sidney Green of Howard University, Charles Reinhardt (retired) of DuPont Haskell Laboratory, and Bernard M.Wagner of New York University Medical Center. Although the reviewers listed above have provided many constructive comments and suggestions, they were not asked to endorse the conclusions or recommendations nor did they see the final draft of the report before its release. The review of this report was overseen by: David H.Moore of Battelle Memorial Institute. Appointed by the National Research Council, he was responsible for making certain that an independent examination of this report was carried out in accordance with institutional procedures and that all review comments were carefully considered. Responsibility for the final content of this report rests entirely with the authoring committee and the institution. The subcommittee gratefully acknowledges the valuable assistance provided by the following persons: Ernest Falke and Paul Tobin (both from EPA); Cheryl Bast, Kowetha Davidson, Po Yung Lu, Sylvia Milanez, Sylvia Talmage, Claudia Troxel, Annetta Watson, and Robert Young (all from Oak Ridge National Laboratory). Aida Neel was the project assistant and Ruth Crossgrove was the editor. We are grateful to James J.Reisa, director of the Board on Environmental Studies and Toxicology, for his helpful guidance. The subcommittee particularly acknowledges Kulbir Bakshi, project director for the subcommittee, for bringing the report to completion. Finally, we would like to thank all members of the subcommittee for their expertise and dedicated effort throughout the development of this report. Daniel Krewski, Chair Subcommittee on Acute Exposure Guideline Levels Bailus Walker, Chair Committee on Toxicology

Next: THE CHARGE TO THE SUBCOMMITTEE »
Tenth Interim Report of the Subcommittee on Acute Exposure Guideline Levels Get This Book
× 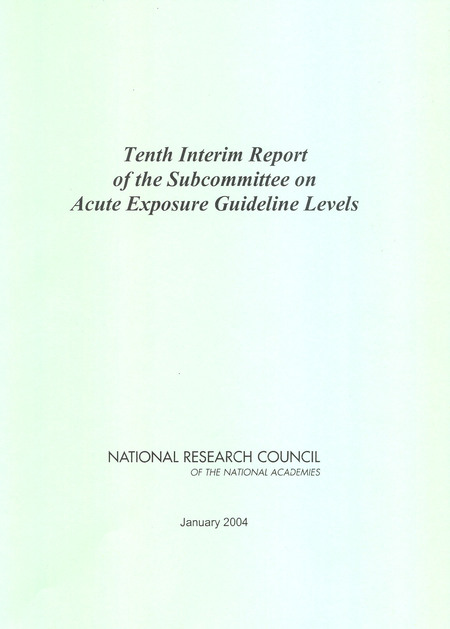