Visit NAP.edu/10766 to get more information about this book, to buy it in print, or to download it as a free PDF.
« Previous: Abbreviations
Page 209 Share Cite
Suggested Citation:"Authors." National Research Council. 1991. Forest Trees. Washington, DC: The National Academies Press. doi: 10.17226/1582.
×

210 1 Authors KAMAL]IT S. BAWA Since 1981 Bawa has been a biology professor at the University of Massachusetts. He has a Ph.D. degree in botany from Punjab University, India. His areas of research are population biology of tropical rain forest trees, genetic variation in tropical tree populations, plant pollinator interactions, evolution of sexual systems, and conservation and management of tropical rain forest resources. JEFFERY BURLEY Burley has been director of the Oxford Forestry Institute, United Kingdom, since 1986. He obtained a B.A. degree in forestry from Oxford University and M.F. and Ph.D. degrees in forest genetics from Yale University. His areas of research and professional interests are tropical tree breeding, wood structure, and agroforestry. FREDERICK H. BUTTEL Buttel is a professor in the Department of Rural Sociology and a faculty associate in the Program on Science, Technology, and Society at Cornell University. He earned a Ph.D. degree in sociology from the University of Wisconsin-Madison. His areas of interest are in technology and social change, particularly in relation to agricultural research and biotechnology. TE-TZU CHANG Chang has been head of the International Rice Germplasm Center at the International Rice Research Institute since 1983 and principal scientist since 1985. He has also been a visiting professor at the University of the Philippines, Los Banos, since 1962. He earned a Ph.D. degree in plant genetics and breeding from the University of Minnesota. He had a vital role in the Green Revolution in rice. Chang has broad experience in managing and designing plant gene banks. PETER R. DAY (Committee Chairman) Before joining Rutgers University as director of the Center for Agricultural Molecular Biology in 1987, Day was the director of the Plant Breeding Institute, Cambridge, United Kingdom. He has a Ph.D. degree from the University of London, and is a leader in the field of biotechnology and its application to agriculture. ROBERT E. EVENSON Since 1977 Evenson has been a professor of economics at Yale University. He has a Ph.D. degree in economics from the University of Chicago. His research interests include agricultural development policy with a special interest in the economics of agricul- tural research. HENRY A. FITZHUGH Fitzhugh is deputy director general for research at the International Livestock Center for Africa, Ethiopia. He received

Authors 1 211 a Ph.D. degree in animal breeding from Texas A&M University. His field of research is the development and testing of biological and socioeconomic interventions to improve the productivity of livestock in agricultural production systems. MAJOR M. GOODMAN Goodman is professor of crop science, sta- tistics, genetics, and botany at North Carolina State University (NCSU) where he has been employed since 1967. He has a Ph.D. degree in genetics from NCSU, and his areas of research are plant breeding, germplasm conservation and utilization, numerical taxonomy, history and evolution of maize, and applied multivariate statistics. Goodman is a member of the National Academy of Sciences. JAAP J. HARDON In 1985 Hardon became the director of the Center for Genetic Resources, The Netherlands. He has a Ph.D. degree in plant genetics from the University of California. His specialty is plant breeding and genetics. VIRGIL A. JOHNSON Before his retirement in 1986 Johnson was a research agronomist for the North-Central Region of the Agricultural Research Service, U.S. Department of Agriculture, and is professor emeritus of agronomy at the University of Nebraska, Lincoln. He earned his Ph.D. degree in agronomy from the University of Nebraska. His areas of interest are wheat breeding and genetics, genetics and physi- ology of wheat, and protein quantity and nutritional quality. DONALD R. MARSHALL Since 1987 Marshall has been professor of agronomy at the Waite Agricultural Research Institute, University of Adelaide, Australia. He has a Ph. D. degree in genetics from the University of California, Davis. His professional interests are population genetics, plant breeding, host-parasite interactions, and genetic re- sources conservation. GENE NAMKOONG (Work Group Chairman) Namkoong is a pioneer research geneticist in population genetics with the Forest Service of the U.S. Department of Agriculture. He is also a professor at North Carolina State University, where he earned his Ph.D. degree in genetics. His primary research area is mathematical population genetics, particularly with respect to forest tree species. RAJENDRA S. PARODA Paroda is the deputy director general for crop sciences at the Indian Council of Agricultural Research, New Delhi. He has a Ph.D. degree in genetics from the Indian Agricultural Research

212 1 Authors Institute, New Delhi. He is well known for his contributions as a forage breeder and for his leadership in the field of plant genetic resources in India. SETIJATI SASTRAPRADJA Sastrapradja is affiliated with the National Center for Research in Biotechnology at the Indonesian Institute of Science. She has a Ph.D. degree in botany from the University of Hawaii. SUSAN SHEN Since 1989 Shen has been an ecologist for the Asia Environment and Social Affairs Division of the World Bank. She previously was a policy analyst and project director at the Office of Technology Assessment of the U.S. Congress and has extensive expe- rience in evaluating the programs of national and international agencies with regard to forest management and conservation. She has a master of forest science degree from Yale University. CHARLES SMITH Smith is a professor of animal breeding strategies at the University of Guelph, Canada. He has a Ph.D. degree in animal breeding from Iowa State University. His research area is in animal breeding strategies, including genetic conservation, and he has been involved in international efforts to conserve domestic animal germplasm. JOHN A. SPENCE In 1989 Spence was appointed head of the Cocoa Research Unit at the University of the West Indies, Trinidad and Tobago. He has a Ph.D. degree from the University of Bristol, United Kingdom. His research interests are cocoa tissue culture and cryopreservation as alternatives to holding field germplasm collections. H. GARRISON WILKES Since 1983 Wilkes has been professor of biology at the University of Massachusetts, Boston. He has a Ph.D degree in biology from Harvard University. His field of research is evolution under domestication in cultivated plants, especially maize and its wild relatives, teosinte, and the genus Tripsacum. LYNDSEY A. WITHERS Since 1988 Withers has been the in-vitro conservation officer in the research program of the International Board for Plant Genetic Resources, Rome, Italy. She has a Ph.D. degree in botany from the University of Nottingham, United Kingdom, and has extensive knowledge of the application of tissue culture, cryopreserva- tion, and plant biotechnology to the conservation of plant genetic resources.

Next: Index »
Forest Trees Get This Book
× 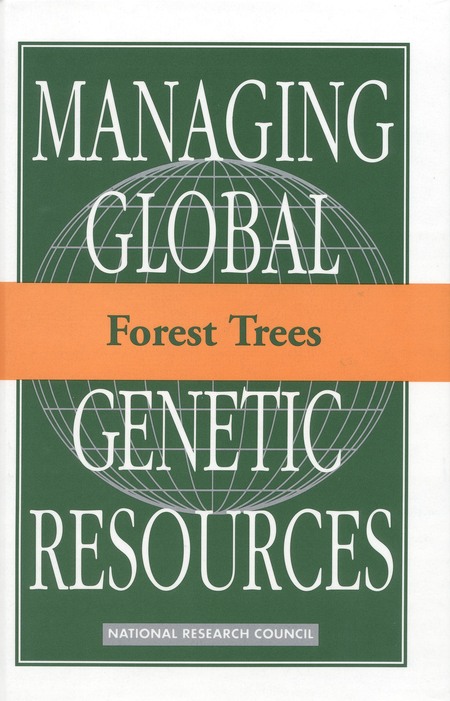 News reports concerning decline of the world's forests are becoming sadly familiar. Most losses are measured in square kilometers, but a more profound loss cannot be measured. As forests disappear, so do their genetic resources. The genes they possess can no longer aid in their adaptation to a changing environment, nor can they be used to develop improved varieties or products.

This book assesses the status of the world's tree genetic resources and management efforts. Strategies for meeting future needs and alternatives to harvesting natural forests are presented. The book also outlines methods and technologies for management, evaluates activities now under way, and makes specific recommendations for a global strategy for forest management.