Educating the Next Generation of Agricultural Scientists (1988)

Visit NAP.edu/10766 to get more information about this book, to buy it in print, or to download it as a free PDF.
Page i Share Cite
Suggested Citation:"Front Matter." National Research Council. 1988. Educating the Next Generation of Agricultural Scientists. Washington, DC: The National Academies Press. doi: 10.17226/18633.
×

REFERENCE CO?" Educating the Next Generation of Agricultural Scientists Committee on Evaluation of Trends in Agricultural Research at the Doctoral and Postdoctoral Level Board on Agriculture National Research Council (1A, S,), (Vijef from fcti^u'. Technical Servict, , NATIONAL ACADEMY PRESS -2161 Washington, D.C. 1988 Ofdftf No..

Preface The agricultural community has raised questions regarding the future availability of an adequate supply of doctoral scien- tists trained to work on problems in agriculture. To help answer these questions, the U.S. Department of Agriculture asked the National Research Council's Board on Agriculture to study the present and projected adequacy of doctoral scientists working in support of U.S. food and fiber industries. The board established the Committee on Evaluation of Trends in Agricultural Research at the Doctoral and Postdoctoral Level to analyze issues relating to the next generation of agricultural scientists. The committee was specifically asked to review present sources of information and seek additional information from the public and private sectors; prepare a profile of food and agricultural scientists; assess future demand for agricultural research scientists; and recommend ways to initiate changes in the public and private sectors to meet the future needs of the agricultural system and its scientists. In many instances, the committee could not identify reliable data or past analyses central to its charge. Hence, many of the principal conclusions and recommendations in this report depend on the committee's judgments. Regardless of the field or time period, it is difficult to project

vi PREFACE the supply and demand for doctoral scientists and engineers, par- ticularly when qualitative factors must be taken into account. In the case of agricultural scientists and engineers over the next two decades, these difficulties are compounded by several factors. They are lack of data describing characteristics of doctoral sci- entists; rapid change in several sciences critical to agriculture, human nutrition, forestry, and food- and fiber-processing indus- tries; uncertain future public- and private-sector investments in the agricultural sciences and technology development; and economic adjustments, social and demographic changes, and institutional reforms that are expected to affect priorities in agricultural R&D and education programs. The committee chose to limit its analysis to a simple examination of employment trends over the last decade as the basis for discussion. Drawing on data available from the National Research Coun- cil's Office of Scientific and Engineering Personnel, the committee constructed profiles of the employment, demographic, and edu- cational backgrounds of doctoral agricultural scientists and engi- neers. (The reader should note that numbers based on the survey of doctorate recipients are estimated.) Subsequently, it developed a set of simple projections, based on three scenarios, of the changes in employment opportunities through the mid-1990s and beyond. The committee convened several ad hoc meetings. At these meetings, the committee and agricultural science leaders, educa- tors, and research administrators discussed future needs for agri- cultural scientists with certain skills and abilities. The committee also discussed with these specialists the adequacy of current skills and what should be done to try to cultivate added skills. Ques- tions were also raised regarding how educational institutions would respond to upgrade curricula and research programs. This report contains the committee's findings, conclusions, and recommendations regarding the current status and future needs of doctoral scientists working in agriculture. Chapter 1 is a summary of the report's findings and conclusions and offers recom- mendations. Chapter 2 presents an overview of challenges in food, fiber, and agricultural industries that the committee believes will lead to new employment opportunities. The number of jobs that might result in specific fields is not quantified, however. Chap- ter 3 contains a profile of agricultural scientists, including trends in employment patterns among the industrial, government, and academic sectors. The profile also reflects age distribution, salary

PREFACE vii patterns, and the quantity of new doctoral degree recipients in agriculturally related fields. Chapter 4 reports the committee's simple projections of the future demand for agricultural research scientists. Advances in U.S. agricultural science and technology will af- fect people around the world. It is essential for our nation to educate and support skilled individuals to fulfill this responsibil- ity. ROGER L. MITCHELL Chairman

Next: EXECUTIVE SUMMARY AND RECOMMENDATIONS »
Educating the Next Generation of Agricultural Scientists Get This Book
× 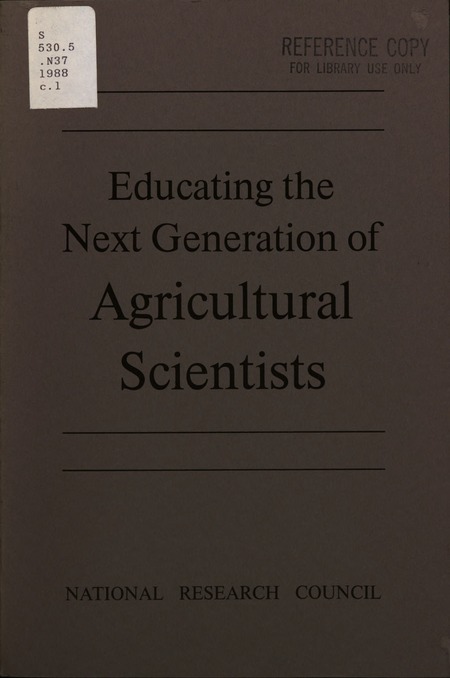