Options for Improving the Safety of DUKW Type Amphibious Vessels (2021)

Chapter:Appendix B: Time to Sink Analysis

Visit NAP.edu/10766 to get more information about this book, to buy it in print, or to download it as a free PDF.
« Previous: Appendix A: Study Committee Biographical Information
Page 121 Share
Suggested Citation:"Appendix B: Time to Sink Analysis." National Academies of Sciences, Engineering, and Medicine. 2021. Options for Improving the Safety of DUKW Type Amphibious Vessels. Washington, DC: The National Academies Press. doi: 10.17226/26447.
×

121 The committee identified low freeboard as one of the factors that define if a DUKW is a higher risk DUKW. To explore the effect of freeboard on DUKWs, the committee undertook a time to sink study. This study used a WWII DUKW hull as the model and calculated the theoretical maximum time before sinking over a range of freeboards. The methodology used was a time step approach as follows: 1. A starting draft was set to give the desired initial starting freeboard for the study. 2. An initial flooding rate was then calculated based on the studyâs damage hole size and starting depth below the initial waterline. 3. Based on the calculated flooding rate, the volume of water flooding for the time step interval was calculated. 4. From the cumulative total volume of water flooded, a new draft and freeboard were calculated along with the new cumulative level of the water inside the DUKWâs hull. 5. Using the new draft and internal water level, a new flooding rate was calculated based on the new static head below the waterline for the damage hole. 6. The calculations are repeated in steps 2 to 5 until the freeboard is zero. The hull model used was based on the WWII DUKW and was simpli- fied, as shown in Figure B-1, to be utilized in a basic spreadsheet. This allowed for the change in the hull displacement to be accounted for as the Appendix B Time to Sink Analysis

122 OPTIONS FOR IMPROVING THE SAFETY OF DUKW TYPE AMPHIBIOUS VESSELS draft increases and the change in the hullâs internal volume as the flooding water levels increase. The following assumptions were used in the time to sink study: A. The internal hull volume permeability was set at 85 percent to account for the DUKWâs engine and drive train, fuel tanks, and other internal outfitting when calculating the internal flooded water depth. B . The flooding rate was calculated using the methodology in the United States Coast Guardâs (USCGâs) Navigation and Vessel Inspection Circular 1-01 (NVIC 1-01) using a 4-inch diameter hole, which is equivalent to the failure of a WW2 DUKW driveshaft boot seal. C. The DUKW was assumed to sink with an even keel and trim. D. No dynamic effects of wind or waves were considered. E. No effects of the passengers moving to don life jackets or escape was factored in. With the last three assumptions the time to sink study is a theoretical maximum time before sinking. The actual real-world time to sink will be less than the time calculated in this study as the location of the downflood- ing point will be affected by these factors. The effects of changes in trim could have been accounted for in the calculations by utilizing a hydrostatics software program such as GHS (General Hydrostatics) coupled with a custom programming macro or a complex spreadsheet with detailed hull hydrostatics and internal hull (tank) lookup tables. The committee chose to use the even keel sinkage assumption based on available resources and FIGURE B-1 WWII DUKW hull used in the model.

APPENDIX B 123 that the effect of changes in trim would be small compared to the potential effects of wind, waves, or the movement of the passengers on the actual downflooding point. For example, 30 passengers and crew at 185 pounds each, 5,500 pounds total, is approximately 30 percent of the typical Stretch DUKWâs lightship of 18,000 to 19,500 pounds. Based on this, the assump- tions used are acceptable for the intent of this study as the committee is looking at the relative effects over a range of freeboards. Figure B-2 shows the results of the study. The black line labeled âTo 0" Freeboardâ is the theoretical maximum time for the DUKW to sink to the gunwale versus the starting freeboard. The theoretical maximum time sink ranged from approximately 7 minutes at 12 inches starting freeboard, the low end of minimum per- mitted freeboards, to 30 to 35 minutes at the high end of the minimum permitted freeboards. At the mid range of permitted minimum freeboards, 20 to 24 inches, the calculated maximum time to sink was approximately 15 to 20 minutes. While 15 to 20 minutes may seem at first review sufficient time to organize a safe evacuation of a DUKW, it must be remembered that this is the maximum theoretical time to sink. As previously discussed, the actual time to sink will be significantly less particularly when the effects of wind and waves and the movement of passengers donning life jackets and escap- ing the DUKW (likely in panic) are factored in. To estimate the effect of waves, the committee also calculated the time to sink to a nominal 6-inch freeboard (red line on Figure B-2). This was intended to approximate the FIGURE B-2 Results of DUKW boat time to sink analysis. 0 4 8 12 16 20 24 28 32 0 5 10 15 20 25 30 35 40 45 St ar tin g Fr ee bo ar d -I nc he s Time to Sink - Minutes To 0" Freeboard To 6" Freeboard

124 OPTIONS FOR IMPROVING THE SAFETY OF DUKW TYPE AMPHIBIOUS VESSELS static effect a 1-foot wave would have on the potential downflooding point and the resulting time to sink. At the mid range of permitted minimum free- boards, 20 to 24 inches, the calculated time to sink is now approximately 10 to 15 minutes. The actual effective evacuation time will be significantly less than the calculated 10- to 15-minute time to sink when the movement of the passen- gers is taken into account and the inherent delay in the start of any evacu- ation from the start of the flooding emergency. The committee estimated that 3 to 5 minutes would be lost from the time the crew is first alerted to the problem, investigates and evaluates the severity of the flooding, and initiates the emergency evacuation procedures. Coupled with the reduction in the calculated time to sink from the movement of the passengers during the evacuation and the realistic evacuation time is estimated to be on the order of 5 minutes. The committee believes this is the minimum evacuation time that will provide for the safe evacuation of a DUKW when fitted with a canopy in the event of a flooding emergency.

Next: Appendix C: Simplified HAZID Register for Water Segment of the Tour »
Options for Improving the Safety of DUKW Type Amphibious Vessels Get This Book
× 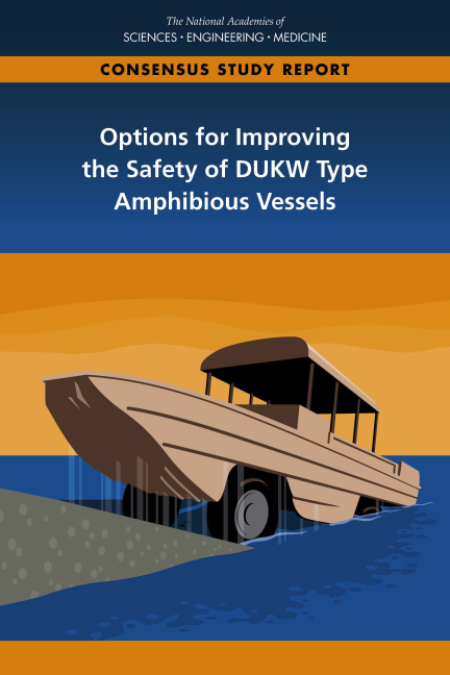 To ensure the safety of passengers and crew on DUKWs — amphibious vehicles also referred to as duck boats — the United States Coast Guard (USCG) should issue a range of new guidelines and requirements.

TRB’s Special Report 342: Options for Improving the Safety of DUKW Type Amphibious Vessels recommends that the USCG use a consistent risk-assessment methodology and update its regulations and enforcement practices in a way that reflects the variable levels of risk to passengers and crew.