Visit NAP.edu/10766 to get more information about this book, to buy it in print, or to download it as a free PDF.
« Previous: Appendix D: Missions Studied But Not Sent for TRACE
Page 717 Share Cite
Suggested Citation:"Appendix E: Panel Missions Not Selected for Additional Study." National Academies of Sciences, Engineering, and Medicine. 2022. Origins, Worlds, and Life: A Decadal Strategy for Planetary Science and Astrobiology 2023-2032. Washington, DC: The National Academies Press. doi: 10.17226/26522.
×

E Panel Missions Not Selected for Additional Study INTRODUCTION As described in Appendix C, each of the surveyâs six panels reviewed the SDT and PMCS reports and assessed those concepts proposed by the community in white papers and prior proposals. Then the panels identified 18 additional large- and medium-class mission concepts that could address key scientific questions within their respective purviews. Following documentation by their originating groups, the steering group assessed each of these concepts and selected nine for additional study. This appendix describes the nine concepts that were not selected for additional study. These concepts are as follows, in no specific order: â¢ VISANâVenus in situ seismic and atmospheric network; â¢ VSCAâVenus sub-cloud aerobot; â¢ VLPâVenus life potential; â¢ VIDEOâVenus investigation of dynamics from an equatorial orbit, â¢ Mars Deep Time Rover; â¢ Mars Polar Ice, Climate and Organics; â¢ Saturn Ring Skimmer; â¢ Interstellar Object Rapid Response Mission; and â¢ Solar System Space Telescope. The following sections describes these nine concepts VENUS IN SITU SEISMIC AND ATMOSPHERIC NETWORK Origin and Goals This concept was proposed by the Panel on Venus to address the following goals: â¢ Determine if Venus is seismically and/or volcanically active; â¢ Characterize the interior structure and thermal state of Venus; â¢ Establish meteorological conditions at the Venus surface; and â¢ Determine the morphology of the Venus surface at various spatial scales. Implementation This concept was proposed as a potential medium-class mission and implemented by five long-long landers and a supporting orbiter. The landers touch down in a pre-planned array within 500 Â±200 km of one another. The orbiter acts as communications relay and searches for seismic activity via airglow emissions. PREPUBLICATION COPY â SUBJECT TO FURTHER EDITORIAL CORRECTION E-1

â¢ Determine the composition and history of Pre-Noachian and Noachian martian units, volcanic, sedimentary, and groundwater/hydrothermal; â¢ Determine the suites of habitable conditions present on early Mars and what controls observed variability over space and time; â¢ Evaluate the surface inventory of water and other volatiles, including change with time by isotopic and mineralogical/chemical analysis; and â¢ Measure, if feasible, the ages of rock units and surfaces. Implementation This concept was proposed as medium-class mission and implemented via a rover using an upgraded air bag landing system and having greater operating autonomy than its MER predecessors. The rover would carry mast and navigational cameras, an infrared spectrometer, magnetometer, mass spectrometer, and meteorological package, as well as an arm-mounted X-ray and MÃ¶ssbauer spectrometers, and, a microscope. The arm would carry a rock-powder acquisition system. Nature of Study Request The panel requested a full mission study (i.e., CML ~4-5) to assess if the PMCS Intrepid lunar rover concept could be adapted for use on Mars. Among the issues to be assessed during the study were the following: can the landing ellipse be reduced to <25 km; can the rover drive 300 m per day; is the feasible to incorporate a sample-handling system and a mass spectrometer on an MER-class rover; and is a solar power system sufficient? MARS POLAR ICE, CLIMATE AND ORGANICS Origin and Goals This concept was proposed by the Panel on Mars to understand the processes controlling the modern- day evolution of the martian climate by studying the climatic record encoded in the northern polar layered deposits (NPLD). Such studies are needed to connect orbital measurements of NPLD with modeling of climate change induced by variations in the planetâs orbital elements over the last 10 million years. The specific goals of the proposed mission are as follows: â¢ Measure the composition, structure, and sub-mm layering of ice and dust contained in the top 2 m of the NPLD; â¢ Quantify the evolution of the NPLD surface, including the net accumulation of dust and ice over one martian year; â¢ Measure the present-day surface energy balance and the fluxes of heat, momentum, dust, and volatiles between the atmosphere and surface over one martian year; and â¢ Measure the polar atmospheric circulation and the transport of water and dust in the planetary boundary layer over one martian year. Implementation This concept was proposed as a medium-class lander equipped with a drill capable of penetrating at PREPUBLICATION COPY â SUBJECT TO FURTHER EDITORIAL CORRECTION E-4

least 50 cm (ideally 2 m) into ice layers for both in situ measurement. Extraction of samples and their delivery instruments mounted on the spacecraftâs deck is also required. The spacecraft lands on ice-covered NPLD shortly after the loss of the north polar seasonal ice cap. Drilling continues through the summer and is followed by meteorological and flux measurements for the remainder of one martian year. Instruments include: a meteorology and flux package; borehole microscopic imager and a thermoelectric conductivity probe, as well as a suite of sample analysis instruments on the landerâs deck for compositional measurements. Nature of Study Request The panel requested a full study (CML ~4-5) to investigate the adaptation of the ICE-SAG (MEPAG 20XX) and Vision and Voyages polar lander (NASEM 2011, p. 362) concepts to one full Mars year of operations and the use of a radioisotope power source. The study would also assess how to optimize the drill and on-board instrumentation for the search for organic material in the ice. SATURN RING SKIMMER Origin and Goals This concept was proposed by the Panel on Giant Planet Systems to address the following goals: â¢ Quantify the processes operating in particle-rich astrophysical disks, including particle aggregation and fragmentation; and â¢ Probe the origins and history of Saturnâs rings. Implementation This concept was proposed as a medium-class Saturn orbiter in a low-inclination orbit (pericenter 90,000-to-130,000 km to avoid both the F and main rings). Repeated passes over the rings at altitudes <1,000 km (cf. 100 times lower than Cassini) will enable extremely high-resolution imaging and sampling the material flowing between the rings and the planet. To maintain pointing at one location (not predetermined) in the rings for at least 1,000 seconds requires that the spacecraft incorporate a scan platform or be able to slew. The in situ instruments are pointed in the appropriate ram directions to obtain sufficient fluxes to measure composition or be slewed to constrain particle and molecular velocity distributions. Instruments include: a high-resolution camera (to image five regions in the rings at â¤1 m spatial resolutions, taking at least four images of the same region separate in time by at least ~250 seconds); a dust detector (capable of sensing particles down to 10 nm in radius, determining particle masses and velocities, and sensitive enough to measure dust fluxes from the rings between 10-15-and-10-13 kg/m2/s and densities between 1-and-1000 /cm3 over each of the main rings); and an ion and neutral mass spectrometer (capable of sensing between l-and-l 00 amu, determining molecule velocities and sensitive enough to measure average ion/molecule fluxes between from the rings between 10-15 and l0-13 kg/m2/s and densities between 0.1-and-105 /cm3 over each of the main rings). The instruments are also required to measure the mass fractions of the material flowing out of the rings in the form of water, organics and silicates to an accuracy of at least 10 percent and determine isotope ratios for selected CHO materials. Nature of Study Request The panel requested a full mission study (i.e., CML ~4-5). PREPUBLICATION COPY â SUBJECT TO FURTHER EDITORIAL CORRECTION E-5

INTERSTELLAR OBJECT RAPID RESPONSE MISSION Origin and Goals This concept was proposed by the Panel on Small Solar System Bodies to investigate the acquisition of time-critical spacecraft observations of novel solar system phenomena. The discovery of the first interstellar objectsâ1I/âOumuamua in 2017 and 2I/Borisov in 2019âtransiting the solar system was one of the key scientific result of the last decade. When NSFâs Vera C. Rubin Observatory becomes operational later this decade, the rate at which interstellar objects are discovered is expected to rise to one per year. The ability to design, develop, and deploy a spacecraft mission on a prompt timescale is also of interest for addressing other classes of opportunistic objects (e.g., Oort cloud comets) and for planetary defense purposes (see Chapters 18 and 22). However, the current structure of mission opportunities within NASAâs Planetary Science Division does not lend itself to opportunistic, rapid response missions to newly identified targets of high scientific value. Therefore, the goal of the study is to investigate novel programmatic approached to the rapid procurement, development, and targeting of objects of intrinsic scientific or societal interest. Implementation This concept was proposed as an examination of novel mission architectures to enable small-class spacecraft to undertake rapid response missions in the next decade. Three principal architectures are to be considered. First, build the spacecraft and store on ground until needed. Second, build the spacecraft and store in space until discovery of the object of interest (e.g., ESA Comet Interceptor). Third, build the spacecraft after the discovery of the object of interest. Nature of Study Request The panel requested that an RMA study (i.e., CML ~1-3|) be undertaken to assess the feasibility, resource, and cost implications of the three programmatic architectures described above. Also, to be examined were the benefits and consequences of a redundant multi-spacecraft architecture. SOLAR SYSTEM SPACE TELESCOPE Origin and Goals This concept was proposed by a cross-panel group to promote new innovative science and to support and exploit discoveries made by past/current/future missions to specific targets. A space telescope dedicated to observations of solar system bodies would benefit the planetary science community by enabling capabilities beyond those of current astrophysics missions and provide more opportunities for high-priority solar system science studies. The goals of the telescope are as follows: â¢ Provide significant improvement in capability and mission timeline compared to current observatories to explore dynamic processes and systems via long baseline time-domain measurements; and â¢ Expand spectroscopic mapping and improves angular resolution of small body populations, including KBOs PREPUBLICATION COPY â SUBJECT TO FURTHER EDITORIAL CORRECTION E-6

Implementation This concept was proposed as a medium-class, 2-to-10-m dedicated telescope with ultraviolet/visible/near-infrared imaging and spectroscopic capabilities, optimized for cadence and survey observations of transient, evolving, and interacting processes in the solar system. Desirable characteristics include the following: ability to operate at solar elongations â¥30Â°; a tracking capability of â¥216â/hr; instrument field of view of 60â; and minimum lifetime of 7 years. Nature of Study Request The cross-panel group requested that an RMA study (i.e., CML ~1-3) be undertaken to investigate the benefits of a dedicated solar system space telescope, to perform trade studies to define an overall optimal architecture and payload, and to demonstrate feasibility within the constraints of the New Frontiers program. PREPUBLICATION COPY â SUBJECT TO FURTHER EDITORIAL CORRECTION E-7

Next: Appendix F: Glossary and Acronyms »
Origins, Worlds, and Life: A Decadal Strategy for Planetary Science and Astrobiology 2023-2032 Get This Book
× 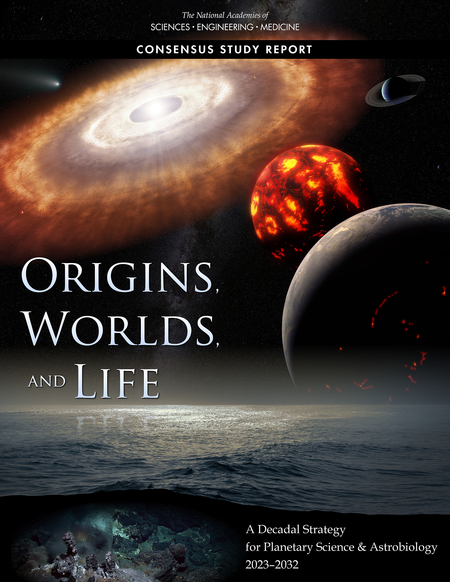 The next decade of planetary science and astrobiology holds tremendous promise. New research will expand our understanding of our solar system's origins, how planets form and evolve, under what conditions life can survive, and where to find potentially habitable environments in our solar system and beyond. Origins, Worlds, and Life: A Decadal Strategy for Planetary Science and Astrobiology 2023-2032 highlights key science questions, identifies priority missions, and presents a comprehensive research strategy that includes both planetary defense and human exploration. This report also recommends ways to support the profession as well as the technologies and infrastructure needed to carry out the science.