Effects of Past Global Change on Life (1995)

Visit NAP.edu/10766 to get more information about this book, to buy it in print, or to download it as a free PDF.
Page i Share Cite
Suggested Citation:"Front Matter." National Research Council. 1995. Effects of Past Global Change on Life. Washington, DC: The National Academies Press. doi: 10.17226/4762.
×

i STUDIES IN GEOPHYSICS Effects of Past Global Change on Life Board on Earth Sciences and Resources Commission on Geosciences, Environment, and Resources National Research Council NATIONAL ACADEMY PRESS Washington, D.C. 1995

PREFACE xi Preface This report is part of a series, Studies in Geophysics, that has been carried out over the past 15 years to provide (1) a source of information from the scientific community to aid policymakers on decisions on societal problems that involve geophysics and (2) assessments of emerging research topics within the broad scope of geophysics. An important part of such reports is an evaluation of the adequacy of current geophysical knowledge and the appropriateness of current research programs in addressing needed information. The study "Effects of Past Global Change on Life" is designed to help provide a scientific framework to assist the evaluation of the possible impacts of present and future global changes on the biosphere. Such a framework is based on the geologic record, which provides a unique, long-term history of changes in the global environment and of the impact of these changes on life. Because organisms are intimately related to their environment, we can infer that environmental changes of the past will have molded the history of life, and the geologic record confirms this inference for a wide range of temporal and spatial scales. The geologic record also reveals how particular kinds of environmental change have caused species to migrate, become extinct, or give rise to new species. More generally, it shows that many kinds of species and ecosystems are naturally fragile, and therefore transient, whereas other kinds are inherently more stable. The topic was initiated by the Geophysics Study Committee in consultation with the liaison representatives of the federal agencies that support the committee, relevant boards and committees within the National Research Council, and members of the scientific community. While this report was being completed, the Geophysics Study Committee ceased operations and its parent Board on Earth Sciences and Resources assumed the responsibility for the completion of this report. The preliminary scientific findings of the authored background chapters were presented at a symposium during October 1989 meeting of the Geological Society of America. In completing their chapters, the authors had the benefit of discussions at this symposium as

PREFACE xii well as the comments of several scientific referees. Ultimate responsibility for the individual chapters, however, rests with the authors. The Overview of the study draws from the scientific materials presented in the authored chapters and from other materials available in the traditional scientific literature to summarize the subject. The Overview also formulates conclusions and recommendations. In preparing the Overview, the panel chairmen had the benefit of meetings that took place at the symposium, comments of the panel, and the comments of scientists, who reviewed the report according to procedures established by the National Research Council's Report Review Committee. Responsibility of the Overview rests with the Board on Earth Sciences and Resources and the chairman and two co-vice chairmen of the panel.

xv Effects of Past Global Change on Life

Next: OVERVIEW »
Effects of Past Global Change on Life Get This Book
× 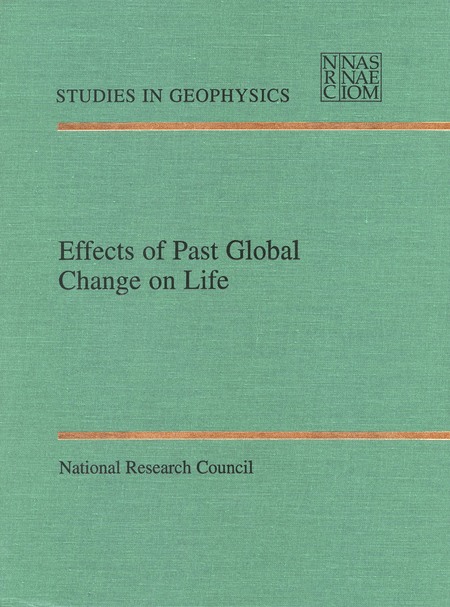 What can we expect as global change progresses? Will there be thresholds that trigger sudden shifts in environmental conditions—or that cause catastrophic destruction of life?

Effects of Past Global Change on Life explores what earth scientists are learning about the impact of large-scale environmental changes on ancient life—and how these findings may help us resolve today's environmental controversies.

Leading authorities discuss historical climate trends and what can be learned from the mass extinctions and other critical periods about the rise and fall of plant and animal species in response to global change. The volume develops a picture of how environmental change has closed some evolutionary doors while opening others—including profound effects on the early members of the human family.

An expert panel offers specific recommendations on expanding research and improving investigative tools—and targets historical periods and geological and biological patterns with the most promise of shedding light on future developments.

This readable and informative book will be of special interest to professionals in the earth sciences and the environmental community as well as concerned policymakers.