Get This Book
Visit NAP.edu/10766 to get more information about this book, to buy it in print, or to download it as a free PDF.
« Previous: 8 Cytokines and Nutritional Status: Possible Correlations and Investigations
Page 233 Share Cite
Suggested Citation:"IV Assessment." Institute of Medicine. 1999. Military Strategies for Sustainment of Nutrition and Immune Function in the Field. Washington, DC: The National Academies Press. doi: 10.17226/6450.
×

Measurement of ''immunity'' has often focused on measurement of humoral immunity to determine the presence of protective antibodies. Cellular immune function is fundamentally more complex and difficult to measure. Chapter 9 emphasizes the importance of the rationale for undertaking immune assessment to selecting the appropriate assessment method. It also provides a brief description of a variety of in vivo, and in vitro assessment methodologies. The use of whole-blood cultures for evaluation of functional activity of lymphoid cells in vitro is explored in Chapter 10 with an emphasis on the feasibility of their use for field studies. 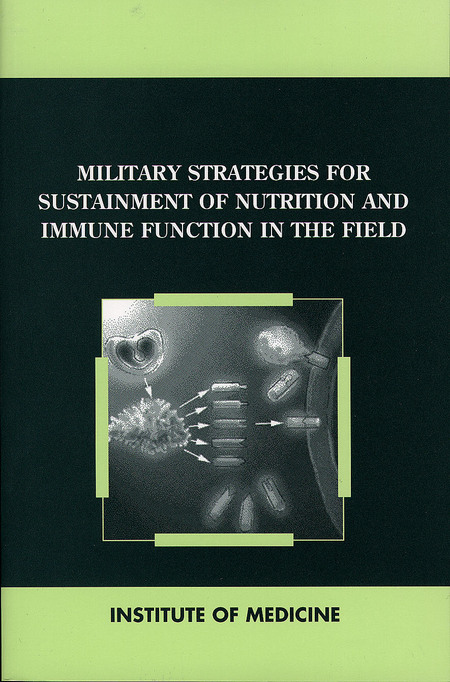 Every aspect of immune function and host defense is dependent upon a proper supply and balance of nutrients. Severe malnutrition can cause significant alteration in immune response, but even subclinical deficits may be associated with an impaired immune response, and an increased risk of infection. Infectious diseases have accounted for more off-duty days during major wars than combat wounds or nonbattle injuries. Combined stressors may reduce the normal ability of soldiers to resist pathogens, increase their susceptibility to biological warfare agents, and reduce the effectiveness of vaccines intended to protect them. There is also a concern with the inappropriate use of dietary supplements.

The first part of the book contains the committee's workshop summary and evaluation of ongoing research by Army scientists on immune status in special forces troops, responses to the Army's questions, conclusions, and recommendations. The rest of the book contains papers contributed by workshop speakers, grouped under such broad topics as an introduction to what is known about immune function, the assessment of immune function, the effect of nutrition, and the relation between the many and varied stresses encountered by military personnel and their effect on health.