Get This Book
Visit NAP.edu/10766 to get more information about this book, to buy it in print, or to download it as a free PDF.
« Previous: Appendix A: Definitions of Terms
Page 234 Share Cite
Suggested Citation:"Appendix B: IEEE Standard Letter Designations for Radar Bands." National Academies of Sciences, Engineering, and Medicine. 2015. Handbook of Frequency Allocations and Spectrum Protection for Scientific Uses: Second Edition. Washington, DC: The National Academies Press. doi: 10.17226/21774.
×

The remote sensing community regularly uses letter designations for frequency bands whose origins can be traced back to the U.S. military during World War II. These designations were used to keep the frequencies of radar operations a secret throughout the war and afterward. This secrecy ended and some degree of global standardization was achieved during the International Telecommunication Union (ITU) meeting of 1959 in Geneva. The Institute of Electrical and Electronics Engineers (IEEE) has been maintaining the Standard Letter Designations for radar-frequency bands since 1976, which were revised most recently in 2002 (see Table B.1). The letter designations are assigned to frequency bands that are spaced at intervals of about an octave within the frequency range from 3 MHz to 300 GHz. Table B.1 also provides the comparison of the IEEE Letter Designations with the ITU bands and their nomenclature.

TABLE B.1 IEEE Standard Letter Designations for Radar Bands Used by the EESS Community and Their Comparison to the ITU Allocations

1. These International Telecommunication Union (ITU) frequency allocations are from the table contained in Article S5 of the ITU Radio Regulations, 2002 edition, reaffirmed in 2009 (see https://standards.ieee.org/findstds/standard/521-2002.html). The ITU defines no specific service for radar, and the frequency assignments listed are derived from those radio services that use radiolocation. The frequency allocations listed include those for both primary and secondary service. The listings of frequency assignments are included for reference only and are subject to change.

2. The specific frequency ranges for radiolocation are listed in the National Telecommunications and Information Administration (NTIA) Manual of Regulations & Procedures for Federal Radio Frequency Management, Chapter 4. The NTIA manual (known as the Redbook) can be downloaded from http://www.ntia.doc.gov/osmhome/redbook/redbook.html.

3. There are no official ITU radiolocation bands at HF. So-called HF radars might operate anywhere from just above the broadcast band (1.605 MHz) to 40 MHz or higher.

5. The official ITU designation for the ultra high frequency band extends to 3000 MHz. In radar practice, however, the upper limit is usually taken as 1000 MHz, L- and S-bands being used to describe the higher UHF region.

7. Designated for aeronautical navigation, this band is reserved (with few exceptions) exclusively for airborne radar altimeters. 8. The frequency range of 24.65-24.75 GHz includes satellite radiolocation (Earth to space only).

9. The designation mm is derived from millimeter wave radar and is also used to refer to V- and W-bands, and part of Ka-band, when general information relating to the region above 30 GHz is to be conveyed.

10. No ITU allocations are listed for frequencies above 275 GHz.

Next: Appendix C: International Astronomical Union Spectral Lines of Most Importance Below 300 GHz »
Handbook of Frequency Allocations and Spectrum Protection for Scientific Uses: Second Edition Get This Book
× 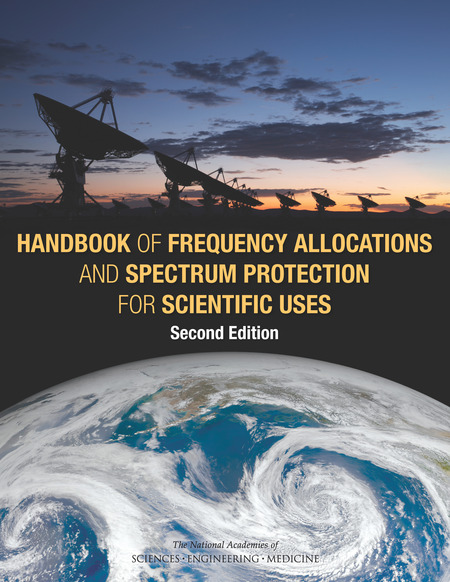 The electromagnetic spectrum is a vital part of our environment. Measures of radio frequency emissions from natural phenomena enable both practical applications, such as weather predictions and studies of the changing of Earth's climate here at home, and reveal the physical properties of cosmic sources. The spectrum is therefore a resource to be used wisely now and to be protected for future generations.

Handbook of Frequency Allocations and Spectrum Protection for Scientific Uses: Second Edition sets forth the principles for the allocation and protection of spectral bands for services using the radio spectrum for scientific research. This report describes the radio frequency bands used by scientific services and includes relevant regulatory information and discussion of scientific use of frequency bands. This reference will guide spectrum managers and spectrum regulatory bodies on science issues and serve as a resource to scientists and other spectrum users.